Richard Bautch presented first, and was the first of two papers related to games – the second of which is by me, and I did not take notes during that, obviously, nor will I try the patience of my blog readers by talking about my game again in what is already a long blog post. Bautch teaches a senior seminar on prophets, and has students build a video game, The Mini Adventures: Prophets Edition. The four modules of the course need to become four levels, and the values of the prophets have to play out on the screen in original ways. The aim is to get at what drives and motivates prophets like Amos or Jeremiah. The game play moves from rural to urban. A character eats scrolls in a homage to both Ezekiel and Pac Man. All the elements were created by students. The look is retro, but that is intentional. The focus is to be kept on ideas. Bautch then moved to discuss the background of the project, quoting video game design theorists who (in the book Slay the Dragon) have called this the golden age of narrative-based video gaming. His focus is not on having them retell a biblical story, but to dig deeper into motivations of characters and such. The course involved collaboration between students in the biblical studies class and in the game studies program. The project was not in the end completed during the time of the course, but can still be considered a success. The students had to submit a GCD (Game Concept Document) for a grade. Bautch said that without the game studies major (which is in the school of humanities at St. Edwards) this might not have been possible, and that the collaboration benefitted them students as well as those in religious studies. Afterwards, an audience member suggested making the games available online. The focus on process as well as product was also noted. Game Maker Pro is the platform that was used to make the games.

After my paper, which I thought was very well received, we shifted away from focusing on games. Katherine Jones presented on statistics and the detection of forgeries. She is working in data science, but took a course from Christopher Rollston which got her interested in this topic. Jones noted the penchant for the public to assume that artifacts which come to light are authentic, and so a means of weighing characteristics as potential pointers to authenticity or forgery. She highlighted the Gospel of Jesus’ Wife as an example, and the need for the media as well as scholars to have better means of evaluating artifacts using an objective statistical model. Scientific tests are rarely as accurate as we assume they are, but they are important within their margin of error. Jones’ project involved flagging artifacts known to be authentic or inauthentic with a binary marker related to eight different criteria: C14 date, linguistic inconsistency, authenticity of script, provenience, location of purchase, monetary motives, social motives, and far-fetched or sensationalist content. Jones also noted the odds against a very small fragment of a lost work happening to mention Jesus’ wife. Next Jones turned to the Moussaieff Ostracon, before sharing the mathematical form of the model, and how various criteria are weighted. The model predicted correctly in 81% of the cases, with some false positives and negatives. Jones then turned to potential issues and practical applications. I wondered what the method would make of the Gospel of Philip, and whether an initial red flag might negatively impact subsequent scholarship on it. Perhaps the solution is to simply not apply it to works whose provenience and date are authenticated. Jones concluded with the placards in the Museum of the Bible raising awareness of questions about the authenticity of Dead Sea Scrolls fragments on display. Further considerations such as patina on inscriptions and impact of ink on what it is written on also need to be taken into account. One of her final recommendations was that we all learn to program in R!

Claire Clivaz presented next on a partnership approach to open access publishing, starting with the aim of oa2020.org, which declares the intention to link all those involved in various stages of knowledge production and publication within an open access framework. Clivaz noted that publishers are typically not participants in digital humanities projects and discussions about them in the production phase. She then highlighted humarec.org, a project that she has been involved in. This offers a manuscript viewer showing a unique manuscript featuring the letters of Paul in three languages: Greek, Latin, and Arabic. All the encoded materials are on GitHub. The images of the manuscript itself are property of the Marciana Library, and they did not give permission to include the manuscript images on other websites within other NT DH projects such as the INTGP ECM, however. Many institutions have moved from speaking of publications to speaking of outputs. Clivaz highlighted the various collaborators in the project, including E. J. Brill, and also quoted Henri Meschonnic. She shared statistics about where from and how long the HumaRec site is visited. The INTGP announced yesterday that they have removed restrictions previously placed on its use. Clivaz mentioned that some of these sites are starting to be included in library catalogues. She also highlighted Sara Schulthess’ webbook, a peer-reviewed monograph for a VRE, and also De Gruyter’s move towards open peer review. In a webbook, each paragraph has a URL to facilitate reference.

John Dyer presented last on digital reading habits in relation to the Bible, starting with photos of the pope reading the Bible on a computer, and someone using the light from their phone to read their print Bible. Dyer focused his research on American Evangelical Bible readers, since Evangelicals have been responsible for producing all the major Bible software and websites. Researchers have found that scrolling impedes reading, that hyperlinks cause distraction, and that interface components such as menus and sidebars also influence and distract. A team of researchers in Beijing found that ereaders used by people who are familiar and comfortable with them. They also found that readers tend to skim when reading ebooks, but giving a time limit tricked them into reading more slowly and thus skimming less. Digital Bibles regularly miss details, such as brackets and notes that flag the status of John 7-8 and the ending of Mark. YouVersion produces infographics with statistics, but they do not provide data to researchers (Dyer asked). A 2015 article by Richardson and Pardun found that people felt that the sense of sacredness was reduced when reading the Bible on a device. Dyer took 150 participants from among regular churchgoers in three churches in the Dallas area. He surveyed their media engagement by type, divided them into two groups (digital and print), then asked them to read the Epistle of Jude, and then the Gospel of John following a longer term reading plan. In his presentation, Dyer shared some of the results of his survey in a nice 3D format. Interesting finds were the penchant of parents to read with children using print Bibles, and for people to prefer print reading except at work. Some parents also added that their children, because of using devices, had increased biblical literacy. Another interesting find was that men comprehended less when reading on their phones. Affective differences were also interesting: readers of Jude in print said they felt encouraged, while digital readers said they felt confused. One participant said that reading the Bible digitally felt more like skimming an email and less like studying God’s Word. Dyer made an amusing reference to the new favorite version, the NAB: “nearest available Bible.” Evangelicals clearly have a lot of flexibility in their pragmatic approach. I wondered whether affect was being reported as comprehension – in other words, is the sense of a sacred experience when reading a print Bible being reported as comprehension, and if so, is it important to test their comprehension rather than merely asking for their perception of it. During the question time, Naomi Koltun-Fromm emphasized that Bible reading (especially in an orthodox Jewish context) is often using the text to remind of passages that are already familiar, rather than reading for the first time. Another commented mentioned that orthodox Jews will not read on devices on Saturdays. Dyer also shared that he considered distributing all new iPads and print Bibles rather than having them use their own. 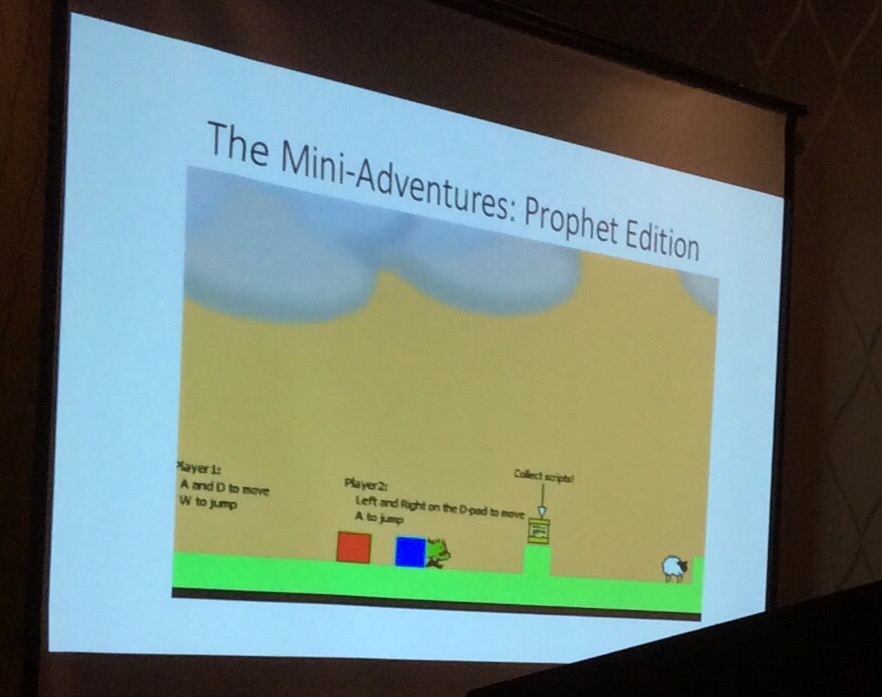 November 22, 2017 First Ever Fan Studies North America Conference!
Recent Comments
5 Comments | Leave a Comment
Browse Our Archives
get the latest from
Religion Prof: The Blog of James F. McGrath
Sign up for our newsletter
POPULAR AT PATHEOS Progressive Christian
1