The PACA Plan and the Second American Civil War

A flyer about the PACA (“Pray America Christian Again”) Plan was stuck on the outside door of my church, and the person who found it gave it to me. It is an effort not to simply pray, but to try to get Christians elected in all government positions. From the flyer, one learns that they have some specific Christians in mind, since Hillary Clinton is vilified with either no awareness of the fact, or no willingness to recognize, that she is a Christian herself.

Whoever put this together isn’t advocating a violent coup – yet – but the plan, and the language used to justify it, will nonetheless remind a lot of readers of this blog of a kind of prequel to The Handmaid’s Tale. Listen to this language from the PACAPlan website:

Let us be clear from the start. We will no doubt be blasphemed by the anti-Christian media as wanting to implement a Puritan theocracy. Puritanism moderated into a Constitutional Republic implemented by profoundly Christian men. That original Constitutional Republic, slow-dripped high-jacked by non-Christians for the last 100 years,  is all we strive to return to; where laws were just when conforming to Christian ideals of morality and were unjust when in contradiction to God’s will. We will not allow ourselves to be intimidated to inaction by mere words again.

The second Civil War will pit New York City against South, North, West, Southwest and Midwest. Although you would not know this fact, because you will not be fighting non-Christians from NYC, but instead would be fighting NYC’s mercenary army of pandered, misguided, underclass, foot soldiers from across the country.

It seems to have started here in Indiana, and thus far to be limited to this state. I’m going to guess that this will probably be the first that most or perhaps indeed all readers of this blog have heard of it. The website says:

If Indiana cannot go PACA, cannot provide inspiration for the rest of the country,  then there is no hope for any State to go PACA.

They don’t seem much more fond of Donald Trump than of Hilary Clinton, since both have New York connections, and they seem to hate New York more than anything or anyone else.

This union of politics with religion makes it seem appropriate to share this tweet by Nebuchadnezzar that Phil Ledgerwood shared in a comment after first posting it on Fred Clark’s blog:

Hebrew captives not bowing to statue when anthem plays? BAD PATRIOTISM. Will fire them, literally. #MakeBabylonGreatAgain 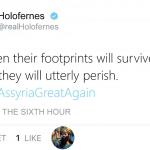 November 3, 2017 A Polite Bribe (and its Sequel)
Recent Comments
39 Comments | Leave a Comment
Browse Our Archives
get the latest from
Religion Prof: The Blog of James F. McGrath
Sign up for our newsletter
POPULAR AT PATHEOS Progressive Christian
1