“In Seven Days” by Thomas Adès is an unusual composition exploring the seven days of creation in Genesis 1-2, not least because it incorporates visual images as part of the composition, along with some more traditional elements that one typically finds in a piano concerto. And so the piece is sold as a CD and DVD set.

Tom Freudenheim wrote in a review of the piece, “Swept up from the tohu-bohu of unruly waves, the audience is buffeted by the composer’s rich reverberations and the videographer’s eye-popping visuals, uncertain whether the aural propels the visual or vice versa. And therein lies the piece’s power, and the audience’s uncanny feeling of participating in the act of creation.” As an academic in the field of biblical studies, it is delightful to see tohu-bohu used in this manner!

An interview with London Sinfonietta cellist Zoë Martlew about the piece includes this comment: “The technical virtuosity of this fearless tackling of the Genesis myth combined with it’s haunting harmonic beauty makes In Seven Days a definite keeper for me, imparting a delicate magic that has grown with repeated hearings.” That site also has Martlew’s thoughts on religion and science in relation to the piece, as well as additional materials that can serve as a useful introduction and guide for listeners.

What do you think of Adès’ depiction of creation? How does it compare, in your mind, to other musical explorations of this theme in general, and/or of the specific account in Genesis 1-2 in particular?

If you enjoyed this piece, you will very likely enjoy other works by Adès, such as Polaris:

As mentioned earlier in the post, you can purchase a recording of the piece which includes not only an audio recording, but visual as well. I confess that I listened to the piece without the visuals, and so perhaps I should also ask what readers of this blog think about that aspect of creation. Genesis 1 comes to us as words on a page, but was it originally composed as sounds to be heard? What happens when a creation is perceived in a manner different than the creator intended? That’s a great line of reflection that I think both Adès and the author of Genesis would approve of! 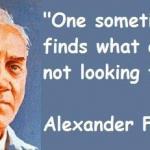 November 5, 2017 Jesus vs. Alexander Fleming
Recent Comments
2 Comments | Leave a Comment
"I don't think Paul is talking about faith vs works in Galatians 3. I think ..."
Phil Ledgerwood Grace, Works, Faithfulness, and Jesus
".........and the life that I live, I live by the faith of the Son of ..."
Nimblewill Grace, Works, Faithfulness, and Jesus
"The casting was (*kisses fingers*) perfection. I loved the characterization of all the poets-and-guests, except ..."
Von Jocks Doctor Who: The Haunting of Villa ..."
"Of note, Kautsky was not a mythicist. He regarded Jesus as a historical revolutionary type ..."
Chris H Cercetări în Istoria Propagandei Comuniste despre ..."
Browse Our Archives
Follow Us!