Larry Hurtado has written an excellent blog post in which he shows that Richard Carrier is simply not telling the truth, not accurate, and not persuasive on a number of topics central to his claims about Jesus. Here is a sample excerpt:

The “mythical Jesus” view doesn’t have any traction among the overwhelming number of scholars working in these fields, whether they be declared Christians, Jewish, atheists, or undeclared as to their personal stance. Advocates of the “mythical Jesus” may dismiss this statement, but it ought to count for something if, after some 250 years of critical investigation of the historical figure of Jesus and of Christian Origins, and the due consideration of “mythical Jesus” claims over the last century or more, this spectrum of scholars have judged them unpersuasive (to put it mildly).

Hurtado then posted a follow-up that sought to respond to a post on Neil Godfrey’s blog Vridar. Hurtado also blogged about the phenomenon of mythicism a few days earlier (kindly mentioning my efforts to address the topic in the process). In that post he wrote:

Despite Carrier’s evangelistic prophecies that the scholarly world will come to see that he, though now a voice in the wilderness, is correct in judging Jesus of Nazareth to be a mythical invention, there is in fact no sign of fulfillment. He is a paid advocate of his views (having been hired to produce these books), not a disinterested or dispassionate assessor of things. He is not expert in the very subjects on which he writes in these books, and his mishandling of the evidence shows this all to clearly. I conclude that, in so far as scholarly judgment of the matter is concerned, Carrier’s often-strident efforts will be judged as the last hurrah of the “mythicist” claim, although internet die-hards are likely to remain doggedly committed to it.

One of the reasons young-earth creationism is viewed as pseudoscience is that it makes false predictions. As religion, of course, that viewpoint should perhaps lead to stoning according to biblical law. But simply in terms of science, the fact that antievolutionists have been declaring evolution a “theory in crisis” since even before Charles Darwin’s time tells us a lot. When mythicists do the same in relation to the fields of history and biblical studies, should the same principles not apply?

Rather than continue as I originally planned with a very long post that also discusses another mythicist, stay tuned for more on this subject tomorrow. In the meantime, if you still want more on this subject and can’t wait, Hurtado posted another entry on his blog on this topic that I have not linked to above, to which Carrier has responded to Hurtado with one of his classic lengthy posts full of accusations, but which never does anything that might render mythicism plausible.  Hurtado  then responded to another one of Carrier’s claims, and Carrier then offered the most hilarious post of his that I ever read, in which he offers imagined conversations between himself and Hurtado which are supposed to show how Hurtado would respond if he were a “real historian” – in essence, the point is that if Hurtado were a “real historian” he would concede that Carrier is right!

Deane Galbraith has also joined the conversation. I will not try to guess how much of Carrier’s book Hurtado has read, but I am quite sure that there is no academic who has not stopped reading a book without finishing it because the part they had read was so atrocious, they could determine on that basis that the rest was not worth reading… 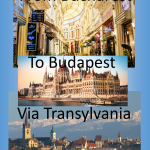 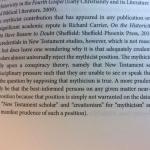