Someone said to me recently that they are not sure that we are happier with our new technology than we were decades ago playing in the dirt.

It struck me that when I was playing in the dirt as a child, I was often imagining that I had technology like what we now have.

This led me to think a little more about the state of our current lives and how technology, play, and childhood – among other things – relate to one another. I was also prompted to think about this topic by Loren Rosson’s blog post asking whether children adventure anymore these days.

Helicopter parenting is probably connected with excessive fear, driven by news stories about events that are on the one hand still relatively rare, and on the other were happening before they were widely reported on. Whatever the reason for it, we expect children to stay in regular contact. On the other hand, that at least leaves some room to allow children greater independence. If the ability to Google and access GPS means that one will be less likely to have the experience of getting lost and figuring out how to find one’s way, the fact that one can do that – and if necessary call home or even the police or an ambulance – ought to also mean that parents can allow their children to explore and venture further afield than might have been advisable without cell phones, however less common the phenomenon of helicopter parenting may have been back then.

On a related note, P. Z. Myers shared a prophetic cartoon from the 1920s predicting what life would be like if phones could be carried in one’s pocket. I agree with him that the cartoon is doubly prophetic, both in the scenarios it envisages, but also in the assumption that it would either not have an “off” button, or if it did, people would choose not to use it or forget to do so. 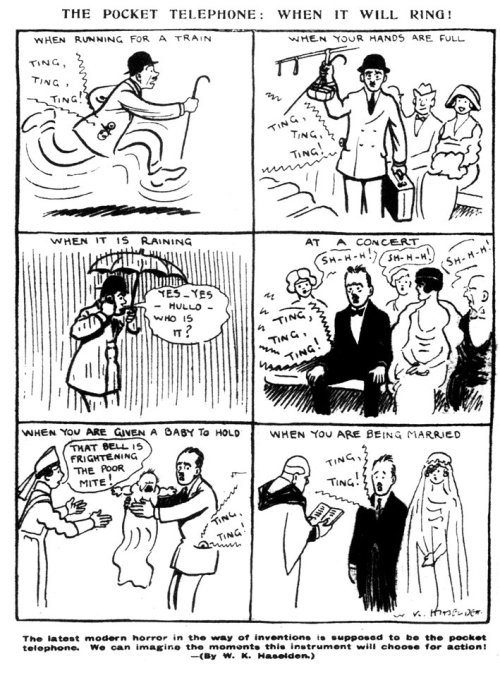 See also Omid Safi’s piece “The Disease of Being Busy,” which includes the role of technology but doesn’t blame it or suggest that it alone, in and of itself, is the reason for the way things are today. Here’s an excerpt:

Since the 1950s, we have had so many new technological innovations that we thought (or were promised) would make our lives easier, faster, simpler. Yet, we have no more “free” or leisurely time today than we did decades ago.

For some of us, the “privileged” ones, the lines between work and home have become blurred. We are on our devices. All. The. Freaking. Time.

Smart phones and laptops mean that there is no division between the office and home. When the kids are in bed, we are back online.

One of my own daily struggles is the avalanche of email. I often refer to it as my jihad against email. I am constantly buried under hundreds and hundreds of emails, and I have absolutely no idea how to make it stop. I’ve tried different techniques: only responding in the evenings, not responding over weekends, asking people to schedule more face-to-face time. They keep on coming, in volumes that are unfathomable: personal emails, business emails, hybrid emails. And people expect a response — right now. I, too, it turns out… am so busy…

February 6, 2018
Star Trek Discovery: “The War Without, The War Within”
Next Post 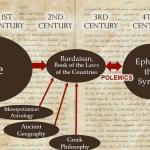