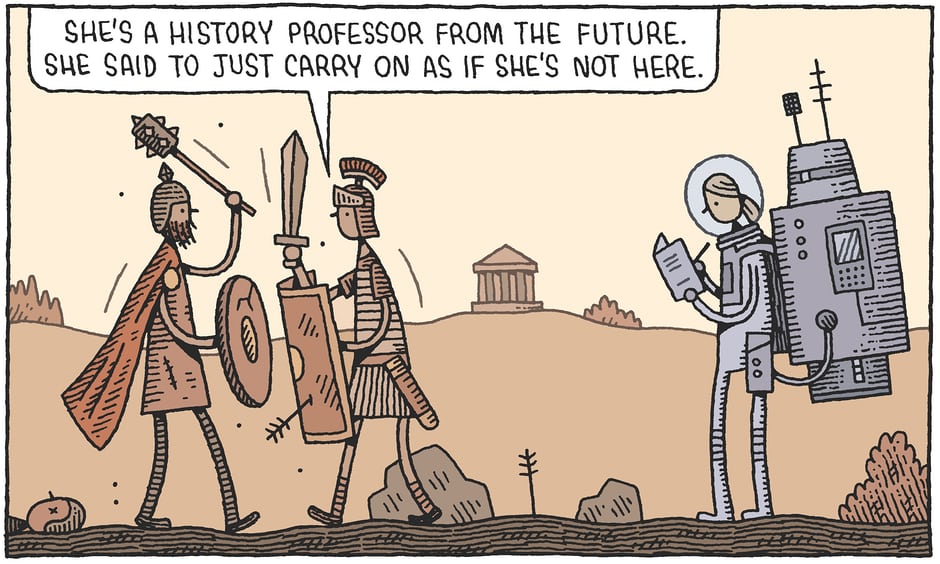 Tom Gauld’s cartoon from The Guardian is about a topic that I have understandably long been fascinated by, given my joint interests in history (in particular that of early Christianity) and time travel. It struck me anew as the TV show TIMELESS returned to our screens, with two historians, mother and daughter, finding themselves aligned on opposite sides of a conflict that involves traveling into the past to not merely observe history, but seek to change it. If there is a phrase that especially jumped out at me in the episode, it was Lucy’s appeal to her mother to switch sides and not remain “on the wrong side of history.” That’s a phrase that has been used proactively, but we must be very cautious in doing so, since rarely does anyone in their present moment think that history will show the flaws of their reasoning and the shortcomings of their morality, never mind expose that what they did was downright evil when viewed with the benefit of hindsight. But the phrase is all the more poignant in a show about time-traveling historians who are messing with the people and events that they think they know, that they teach the significance of.

And so the episode raises the question: if you’re willing to change history, doesn’t that automatically put you on “the wrong side of history“?

A phrase in the episode that struck Paul Levinson is a reference to the manifesto of a particular man whom Lucy’s mother is determined to save the life of as “like Mein Kampf by Philip K. Dick.” I just assumed this meant that it was like Hitler’s famous book, but a twisted sci-fi version of it. Levinson, however, wondered whether it might not mean that, as a result of their travels, Philip K. Dick became the author of Mein Kampf. What do you think? One thing’s for sure (and this relates to Orwell’s dystopian vision in 1984): when history becomes something changeable, one loses any clear sense of a distinction between “reality” and the unreal.

The episode included references to Hunger Games and Handmaid’s Tale as well.

What did you think of the start of season 2 of Timeless? If you missed season 1, you can watch it via Amazon!

March 12, 2018
#CFP The Material of Christian Apocrypha
Next Post 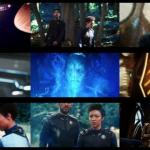 March 14, 2018 Canon and Nitpickery in Star Trek Fandom and Other Religions
Recent Comments
2 Comments | Leave a Comment
Browse Our Archives
Follow Us! 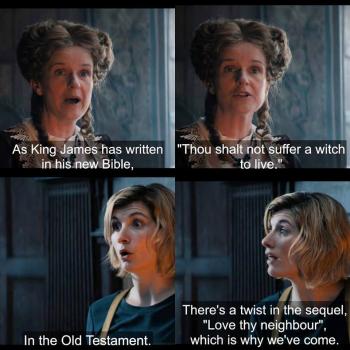