A Wrinkle in the Expanse

I finally got to see the movie version of A Wrinkle In Time recently, and it was interesting to have that experience coincide with watching the most recent episode of The Expanse.

Madeleine L’Engle’s novel A Wrinkle in Time was one that I thoroughly enjoyed reading as a young person, and I loved the other books in the series as well. It was very strange watching the movie and feeling as though, on the one hand, it was very clearly not aimed at someone my age and is on so many levels a parable of elementary school angst. And yet I felt a lump in my throat and was profoundly moved as well as I reconnected with this story.

There are two reasons that I felt it natural to connect the Wrinkle in Time movie with The Expanse. One is the contrasting engagements with Christianity. The movie removed the references to Jesus, God, and angels that gave poignant expression to L’Engle’s faith in the novel. The TV show has a sympathetic, human, believable and believing Methodist minister, who lets down a fellow Methodist in a time of need, feels great remorse, and preaches a beautiful sermon. There has been a great deal of discussion of this online, and I would probably have to reread the novel to have any chance of doing justice to it myself.

But the other reason I thought the two connect naturally is because there is a common theme that is at the heart of human religion that also connects both shows, and perhaps all science fiction. That is the theme that humanity will find or be found by some power that will enable us to experience and accomplish things that currently seem magical. Flying into the heavens. Seeing other worlds. Everything else that is part of imaginative storytelling among human beings.

In many versions (including both Corey’s and L’Engle’s) otherworldly intelligences reach out to us to open the door. Typically, they reveal that the key was something we held all along. In other cases, we discover the thing that holds powerful potential in the world around us, whether that be dilithium crystals, vibranium, or zohar.

In the classic Star Trek episode Arena, the Metron are highly advanced beings who place Captain Kirk and his Gorn counterpart in a setting that provides resources that allow them to fight one another – or find a way to peace. The universe has clearly done the same to us on a much larger scale, whether one inhabits the secular universe envisaged by Gene Roddenberry, the magic-filled one envisaged by Madeleine L’Engle, or the scientific yet spiritual one depicted under the pseudonym of James Corey.

And so whatever one’s thoughts about A Wrinkle in Time or The Expanse, whether in print or on screen, it does seem that they all reflect a view of the universe that is widely shared, and which hopes for magical possibilities in our future. Even when those are thought of in scientific terms, the perspective in question really doesn’t leave room for atheism. A cosmos that gives life and then offers resources for life to spread to the stars may not be the view of God that most atheists are interested in, but failure to acknowledge the divine, the metaphysical, the numinous, the profoundly mysterious in it leaves something huge out of the picture. 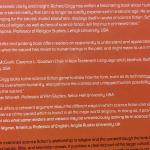 June 20, 2018
Science Fiction and the Imitation of the Sacred
Next Post 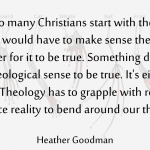 June 22, 2018 Theology and Reality
Recent Comments
25 Comments | Leave a Comment
"African Americans are Americans, not Africans. It should not be suggested to them that they ..."
Roger Morris White Christianity and Disney Princess Theology
"It is ironic that the same people who can't let go of the Confederate past, ..."
CroneEver White Christianity and Disney Princess Theology
"Is this particular section of Jubilees preserved only in Ethiopic or perhaps Latin? It's not ..."
robrecht Was Paul Uninterested in the Historical ..."
"What actual tangible authentic and original first century originated evidence can you reference?Every word attributed ..."
rationalobservations? Was Paul Uninterested in the Historical ..."
Browse Our Archives
get the latest from
Religion Prof: The Blog of James F. McGrath
Sign up for our newsletter
POPULAR AT PATHEOS Progressive Christian
1