I’ve mentioned before how much I feel I have learned about the New Testament from living in Romania. But I also feel like there is more to be learned and explored. For instance, not long ago I visited a Romanian church in Chicago, and I went armed with knowledge from having lived in Romania for several years and having visited even more frequently. I knew I had to go prepared to say something if asked without any notice, because visitors – historically, in particular foreign visitors to churches in Romania – would be asked to say something, at the very least a greeting that was more than a mere “hello,” and preferably a sermon of some sort.

But it was only on this recent trip that it occurred to me to connect this with the Book of Acts, and what happened when Paul showed up unannounced in a synagogue. Since then, I have found myself pondering this topic, and suspecting that it might be a fruitful avenue of research. The study of modern Mediterranean, Middle Eastern, and adjacent cultural regions regularly provides useful anthropological and social models that offer insights into the values and practices assumed in the New Testament,

In relation to Paul, the possible payoff of this might be limited, giving us a better sense of the networks of contacts he may have relied on when traveling.

But in the case of Jesus, if there is any truth to the depiction of him being asked to speak in synagogues, that may provide some important indicators about his level of education and/or his social status.

I would be interested to hear from anyone who can provide relevant examples either from ancient literature (e.g. the rabbinic corpus) or more recent practices in relevant cultures (e.g. what happened or still happens in churches, synagogues, and mosques around the Mediterranean, across the Middle East, and into the Balkans and Turkey (or in other words, anywhere in the former location or near vicinity of the Roman Empire). I am sure there are many texts that describe such circumstances, even if only in passing, and that I will need help in tracking down a relevant sampling from the range of possible sources. And so I appeal to you, readers of this blog, for help!

Let me add in conclusion that I do not think the ability to speak either eloquently or poetically does not automatically corellate with status, wealth, formal education, or stereotypical lines of employment. As I read recently in an article about the song “Wichita Lineman,” part of  songwriter Jimmy Webb’s thinking was precisely that an individual in the lonely technical laboring job of maintaining phone lines may nonetheless be a poet.

Of related interest, Ian Paul shared a blog post about the critical study of the Qur’an in a manner that is now familiar to those who work on the Bible.  I say it is related because in the case of both Muhammad and Jesus, critical analysis of sayings attributed to them, and the recognition of layers of redaction, can bump up against dogmatic claims. Sometimes the issue is not the suggestion that the religious figure was uneducated, but the suggestion that they were, since one can otherwise claim that that their impressive words are proof of inspiration rather than study and training. Scholars of both Islam and Christianity should follow the evidence where it leads…

Who really wrote the Qur’an? 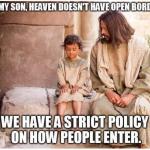 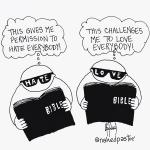 July 12, 2018 The Bible is What We Make It
Recent Comments
7 Comments | Leave a Comment
Browse Our Archives
get the latest from
Religion Prof: The Blog of James F. McGrath
Sign up for our newsletter
POPULAR AT PATHEOS Progressive Christian
1