You have probably all heard fundamentalists such as young-earth creationists insist that they don’t interpret the Bible, they just read it, and others should do likewise? Sometimes it is explicit and generally stated in more or less the way I just did. In others it is implicit: don’t see if a day can be interpreted in some manner other than as a literal 24-hour, just take the text at face valuem day means day, what everyone means by day.

But have you ever noticed how selectively they apply this rule? When I mention the death of Judas in this context, I am not headed in the direction of the story about the person who read “Judas went and hanged himself” and then flipping to another random verse read “go and do thou likewise.”

No, the death of Judas is of interest in this context because the versions of what happened to him in Matthew and Acts contradict one another. Hopefully you are aware of at least the broad issue about this: Does Judas hang himself or does he fall headlong and have his innards become his outards?

I heard someone insist in response to having this pointed out to them that, since the priests bought the field with Judas’ money, technically one could say that he bought it.

But that isn’t what the text actully says. Don’t interpret it, just read it.

Perhaps they bought it in his name?

That isn’t what the text says. Don’t interpret it, just read it.

And for those who try to harmonize the two accounts of his death by saying that he tried to hang himself but the rope or tree branch snapped, that too is not something that the text says.

And just how do you fall headlong when trying to hang yourself? Maybe he hung himself from a tree on the edge of a cliff, and fell in a way that involved spinning around in midair?

That isn’t what the text says. Don’t interpret it, just read it.

And so my main point is to recommend pointing this out to anyone who says they don’t interpret the text, they just read it, or recommends that you approach the text that way. I think the most helpful response will be to help them discover the limit to their own willingness to follow their stated principle.

All it should take to get them to see the falsity of their claim is one discrepancy, or one text that says something fundamentalists think the Bible shouldn’t say.

Of related interest see Bart Ehrman’s account of his first encounter with scholarship that engages with these sorts of matters. 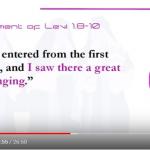 August 5, 2018
Heroically Battling Water-Chaos in the Bible and Beyond
Next Post 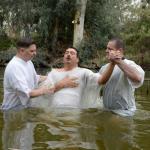