Recap of Polemic in Late Antiquity Session at #SBLAAR18

This Traditions of Eastern Late Antiquity session felt like it had less of a unifying thread running through it for some reason, despite the clear theme, which is ironic, given that the Digital Humanities cosponsored section had papers focused on cuneiform, Mandaic, Syriac, and Ethiopic text projects! Perhaps this was because the ways that Christians referred to and engaged with Muslims, and the ways that Mandaeans engaged with Christians, are typically isolated from one another in completely different fields. By the end of the session, however, the importance of these disparate research areas to one another was clearly evident, and so what was lacking initially emerged on the horizon as a place that needs further attention from us in the future. That is arguably as important a result as if the papers themselves had already engaged this fully and in a manner that reflected a wealth of prior scholarly engagement.

Laura Locke Estes’ paper focused on the recycling of a common trope of Christian polemic against Jews which is subsequently applied to Muslims, the idea that Christians are mature and eat solid food, while those who reject the Trinity remain with milk, at an infantile level of understanding. Figures like Sergius the Stylite and the Monk of Bet Hale were not equally familiar to everyone present. Intriguing aspects of the polemical engagement were noted – for instance, is this language an exhortation to maturation or does it reflect an inherent difference? Even though being Jewish, Muslim, or Christian is regularly spoken of in terms of ethnicity, the identities in question are simultaneously fixed and fluid. “The New Jews” is how Timothy I and other patriarchs refer to Muslims, and so there was awareness on the Christian side of similarity between the groups and perhaps also the recycling of polemical tropes. Such Christian authors allowed that Muslims may enter the kingdom, but like hired hands rather than sons. Also fascinating was the discussion of the Bahira Legends in which Kaab purportedly corrupts the Qur’an, removing Christian elements and adding anti-Trinitarian ones. The dismantling of important distinctions between Jew and Muslim allowed recycling of existing arsenal of polemic, but also extended the boundaries of the “hired hands” who might nonetheless be included in the Kingdom of God. Christians thus ended up granting a measure of credibility to Muslims through the connection they made with Jews. And in an ironic twist, Muslims used Christian supersessionist arguments against Jews against the Christians themselves.

Charles Haberl and I presented on the depiction of Jesus in the Mandaean Book of John. In this work, John uses parabolic language in insulting Jesus, and rather like the interlocutors of Jesus in the Gospel of John, Jesus himself proves uncomprehending, remaining at the literal level and missing the symbolic point. The details often reflect detailed knowledge of the Christian tradition, such as when Jesus’ solution to John’s riddle involves the building of a house on sand. The analysis of the section that follows demonstrated to Haberl that there is no puzzling reference to “Christ-Paul,” but rather the claim that the diabolical Ruha (Spirit) has turned Mandaean ritual elements into “blanks” that are then used to fabricate Christian rituals that are similar to but departures from the Mandaean ones. An important result of this is that scholars of Mandaeism who spoke disparagingly about Mandaeans supposedly failing to get details about Christianity correct prove to have failed to understand the Mandaean texts themselves. Parody often distorts its focus, but in ways that are intentional and often reflect actual knowledge of their target.

Yoseob Song presented about the oldest Arabic Christian commentaries found at the St. Catherine’s Monastery on Sinai. This covered Bar Koni’s Scholion, a commentary in question and answer form, the writings of Isho’dad of Merv, and then asked about the relationship of a previously unpublished commentary, Arabic MS 151, to these previously known works. They converge, for instance, in arguing against those who view Jesus as like Moses rather than as God. Isho’dad did not use the terms “Jews” or “new Jews” in anti-Islamic polemic. The bishop’s use of Allah to denote the Christian God was interesting, as was his commentary on 1 Cor.8:6, emphasizing that there are not two gods and two lords. The use of the bismillah at the start of Christian letters was also striking.

Tina Shepardson acted as respondent, and highlighted how biases of familiarity and historical circumstance can lead us to sympathize more with history’s winners, and/or to neglect or undervalue marginalized groups. Nuance is important in an era of increased bigotry and discrimination, and is not just a matter of abstract scholarship. Often as a result of the mere fact of where we focus our attention, the more marginalized the community, the more they are disadvantaged in scholarly treatment, regardless whether they are the source or the target of the polemic being studies. 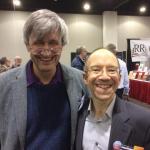 December 8, 2018
Recap of Traditions of Eastern Late Antiquity and Digital Humanities Session at #SBLAAR18
Next Post 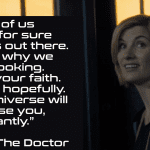 December 10, 2018 Doctor Who: The Battle of Ranskoor av Kolos
Recent Comments
0 | Leave a Comment
"Video games and religion are the opiate of the masses, however, both are completely fake ..."
Judgeforyourself37 Heroes of the Bible
"I always thought the Cybermen were more of a threat than the Daleks, but that's ..."
Phil Ledgerwood Doctor Who: Ascension of the Cybermen
"Carrier just took another mimesis swipe, this time at the empty tomb in Mark: https://www.richardcarrier...."
John MacDonald Revisiting the Empty Tomb
"That's so fantastic - not just about the carnival but even more so the website ..."
James F. McGrath #CFP Recovering Female Interpreters of the ..."
Browse Our Archives
Follow Us!