I was asked a while back about the notion that Matthew’s Gospel presents a “third way” between passivity on the one hand and violent resistance on the other. This viewpoint gets mentioned from time to time, but still seems not to be as widely known as it deserves.

I have long suggested that a backhanded slap would be something reflecting a power difference, rather like the way a lord might strike a servant in an episode of Downton Abbey. But I could not think of  a clear example from the time of Jesus, and so I worried that I might be engaging in anachronism. And so I was grateful to have the text below (Mishnah Baba Kamma 8:6) drawn to my attention as I was reading Roman Montero’s new book on the Sermon on the Plain, Jesus’s Manifesto:

If a man cuffed or [punched] his fellow he must pay him a sela [4 zuz]. Rabbi Judah says in the name of Rabbi Jose the Galilean: One hundred zuz. If he slapped him he must pay 200 zuz. If [he struck him] with the back of his hand he must pay him 400 zuz.

Let me also share my blurb for that book, now that it is out:

Montero’s book is not simply another exposition of the ‘sermon’ of Jesus, but an exploration of how Jesus’ ethical teachings compare and contrast with those of major influential figures from the Greek world like Aristotle and Plato, as well as their connections to Israel’s ethical traditions as articulated by figures such as Isaiah and the rabbis of the Mishnah. The result is a powerful historical portrait of Jesus as a teacher in conversation with his contemporaries (as well as the past and longstanding cultural values), offering a radical vision for a community that has love as the ‘central organizing principle’ of its values and its practices.

The Difference between a Pacifist and a Passivist

A fellow Patheos blogger looked at the meaning of turning the other cheek in context. So too did Phil Long.

Eric Reitan offered suggestions on how to fight hate, with a “do” list and a “don’t” list. Let me provide an excerpt from each. First, a “don’t”:

Fight hate by recognizing its seeds in your own heart: the disdain, the condescension, the dismissal of others based on where they’re from or what they look like or what they believe or how they respond to the struggles of life. Forgive yourself for those seeds. Forgive others for those seeds.

Click through to read the whole thing. Also relevant to this topic:

A Wrinkle in Time and the Gospel of the Third Way

Scientific study of nonviolent resistance made the news:

Erica Chenoweth, a political scientist at Harvard University, confirms that civil disobedience is not only the moral choice; it is also the most powerful way of shaping world politics – by a long way.

Looking at hundreds of campaigns over the last century, Chenoweth found that nonviolent campaigns are twice as likely to achieve their goals as violent campaigns. And although the exact dynamics will depend on many factors, she has shown it takes around 3.5% of the population actively participating in the protests to ensure serious political change.

For more on this from Harvard: Why non-violent resistance beats violent force when it comes to bringing about lasting social change

Commonweal had a piece about traditional disobedience. Richard Beck wrote about our problems with the Sermon on the Mount. Episcopal Cafe had a piece on the beatitudes.

I invite you to read through the Gospels and underline all the times Jesus tells someone “Your sins are forgiven.” Then, take note of how quickly Jesus says this; usually before they’ve even opened their mouth to ask him anything at all.

How does Jesus respond to our sins? He forgives. Completely. Automatically. One hundred percent.

And, knowing that we are so completely and effortlessly forgiven is what empowers us to freely and extravagantly forgive those who harm us.

What Jesus Reveals To Us About Forgiveness

Stop Waiting For Jesus To Return To Fix Everything 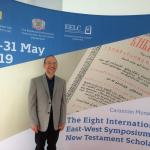