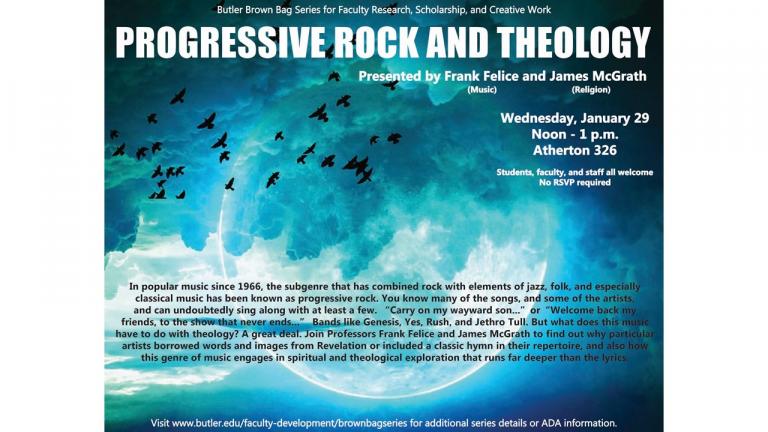 I’m sharing this poster for an upcoming presentation at Butler University, related to a book project that Frank Felice and I are working on. Do have a listen as well to this performance of one of Frank’s song cycles:

Tangentially related is this podcast on the patron saint of musicians:

Listening to someone else’s music is taking a stroll through her or his head.  Someone once gave me a disc of songs built around a theme.  Although the theme came through I feared a little of what I heard here.  Some who know me primarily from my overly pious upbringing would be shocked to find Cohen on my favorites list.  For me he has no pretense.  Instead of ignoring religion, sexuality, or politics, he tried to make sense of them through song.  For me—and listening to music is a very personal thing—I think I understand when I’m drawn into his lyrics.  His experience of life was vastly different from what mine has been, yet he’d accurately mapped the direction my mind might wander, if given free rein.  Religion will hold your imagination captive, if left to its own devices.

Those who reduce Leonard Cohen to his over-used “Hallelujah” catch only glimpses of this complex man.  I once read an article about Bruce Springsteen in which a friend of his said that if he hadn’t succeeded in music he might’ve become a priest.  There’s an authenticity to these artists who write probing songs that have deep spirituality yet allow themselves to be human.

And of course, at the intersection of the Bible and music, always keep an eye on Bob MacDonald’s blog to see what he’s been up to and the progress made in his project of interpreting the Hebrew Bible’s cantillation marks. See too his comments about a recent book on this topic.

January 26, 2020 Explaining Star Trek V: The Final Frontier
Recent Comments
0 | Leave a Comment
Browse Our Archives
get the latest from
Religion Prof: The Blog of James F. McGrath
Sign up for our newsletter
POPULAR AT PATHEOS Progressive Christian
1