It is high time for me to invite readers of my blog to my church, Crooked Creek Baptist Church, once again, as I have done occasionally in the past. Lately in my Sunday School class, we’ve been studying the First Epistle of John, although as always we veer off from there into interesting themes, connections, and side interests. Not surprising, when the text uses words like “antichrist.” But among my favorite recent discussions was one about unity and diversity in the early church and in our time. Someone mentioned the importance of compromise, of finding middle ground when others tend towards polarization. I was struck by that, since conservative churches bristle at the idea of compromise. What, I asked, might it look like if compromise were held up as the chief identifying characteristic of the church? After all, I noted, the first church council that we are told about, in Acts 15, was about finding compromise between Torah observant Jewish Christians and the Gentiles that were being invited and welcomed into their midst, albeit with varying understandings of the basis on which they did so. Those present were struck, as I hoped they would be, by my suggestion that the reason it is hard to be a Jewish Christian, a Messianic believer, a Jew for Jesus, is Gentile Christians. Eating the food you’ve always eaten isn’t a problem, until you welcome others into your group who eat things you cannot and will not.

Many misunderstand what Paul’s biggest challenge was as he promoted the Gentile mission. The biggest challenge, in practice, was often the question of how on earth these different people with their different food norms could eat together. If they couldn’t find a way to do so, there was no body of Christ but bodies of Christ. And for Paul, that wouldn’t do. Part of the point of the whole endeavor was precisely that Gentiles were welcomed, that the people of God became more numerous and more diverse.

This tied in with the theme we explored in 1 John that day. The language used can be taken to suggest that children of God simply don’t sin, and/or that anyone who sins is automatically excluded or to be shunned as an outcast. But other language used in the same part of the letter problematizes this interpretation. There are references to purifying ourselves. There are referenced to hope and to what we will become. Such language is incompatible with an understanding of Christian identity as involving having already reached perfection. The language of being children of God provides a route to making sense of the diverse kinds of expression in the letter. The aim is to have a family that is characterized by a particular identity, by particular virtues and values. A family can have certain characteristics and be known for them, without it implying that no individual ever has a bad day, or at least a bad hour before they’ve had enough coffee after a difficult sleepless night. As so often when it comes to making sense of biblical texts, when relational images cease to be in center stage, many other things go awry. When they are made the hub, other things can be seen to orient themselves naturally or at least intelligibly around them.

We continue to wrestle with what it means to be the church and how to walk the narrow way between extremist and exclusivism and merely accepting anything and everything. On a previous occasion, we suggested that we can be committed to following Jesus in a way that welcomes others whom we recognize as sharing that same aim of following Jesus, while accepting that their own path might well diverge from ours. Perhaps this can and should be another example of the church characterized by compromise – not in the sense of lack of identity, but in the sense of an identity that recognizes the centrality of Jesus and of God to such an extent that it refuses to make an idol of other doctrines or stances that might create divisions among the followers of Jesus and undermine our mission and our unity.

The challenge that faced Paul continues to face us today…

February 21, 2020 #CFP Philosophy and Eschatology, or: thinking of/from the end of the world
Recent Comments
32 Comments | Leave a Comment
"Well written. Good insights. I enjoyed the show.As to a resurrected Picard in the android ..."
Dalek1963 Gods of Star Trek: Picard
"I'm not sure that I trust the judgement of someone who says, "And even if ..."
David M Copycat Anti-Religion
"David Kyle Johnson over at DC just posted a defense Calvin and Colombetti's article and ..."
John MacDonald Copycat Anti-Religion
"I'm not going to read the post because I've only seen episode 1 and don't ..."
John MacDonald Gods of Star Trek: Picard
Browse Our Archives
Follow Us! 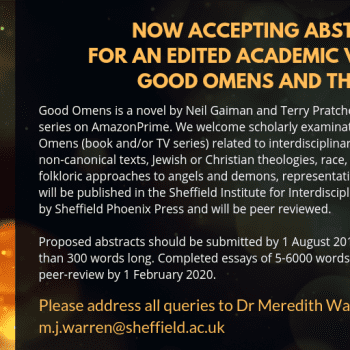