Academics and Freedom of Speech

An interesting exploration of the significance and freedom of speech. Here’s an excerpt:

Consider science. I think that science has been more successful than anything else at dragging us closer to the truth. And I think in certain ways science is a model of a kind of market place of ideas. The core idea is that anyone and everyone can contribute and that all the ideas and information are available to everyone. No one mandates anyone else’s opinions about, for example, what the best theory currently available in some area on some topic is. Instead, the success of a theory is that it gains adherents over time. If it becomes the dominant theory it’s only because the people who study whatever the theory is a theory about think it’s the best theory about that. But science is hardly an unregulated market. “Everyone” mostly means only people with certain qualifications. And to the extent that information is made available it’s through refereed journals. Outside of the strict confines of your field, you still have freedom of speech in general; but whether your speech counts as a contribution to your field is highly regulated.

One of my pet peeves is when people claim that it is a fallacious “argument from authority” when someone points out that there is an overwhelming consensus of experts on a given matter. As I’ve pointed out countless times, the fallacy of appealing to authority means almost the precise opposite of that. It is when someone treats the words of another as gospel because that individual has certain credentials even if they are saying things at odds with most or all others with relevant expertise. This topic came up again on my own blog here:

Of related interest, the National Center for Science Education was featured in a documentary about the war on science, and there was online interaction between David MacMillan and Ken Ham. You can watch the documentary War on Science from CBS News: 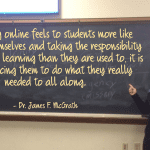 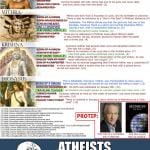 March 18, 2020 Copycat Anti-Religion
Recent Comments
7 Comments | Leave a Comment
"Yeah, do Calvinists even bother with the Problem of Evil? It’s not clear to me ..."
Beau Quilter Because of the Fall: More on ..."
"One last thought."The first being last and the last first" may also explain Mark portraying ..."
John MacDonald Revisiting the Empty Tomb
"Opponents may have latched onto the dishonorable burial issue, not recognizing in Mark it was ..."
John MacDonald Revisiting the Empty Tomb
"On the other hand, another possibility is that Mark invented the dishonorable burial and introduced ..."
John MacDonald Revisiting the Empty Tomb
Browse Our Archives
get the latest from
Religion Prof: The Blog of James F. McGrath
Sign up for our newsletter
POPULAR AT PATHEOS Progressive Christian
1