Inerrancy vs. Humility and Humanity

I had a draft post here for a while with something I hoped to return to, comparing how scripturalists/fundamentalists in religion interpret the sacred text, and how “originalists” interpret the Constitution. In the end, since most of those thoughts were from someone else who didn’t give me the OK to share what they wrote, and we never managed to get an article written, I scrapped the idea.

But then more recently I had a conversation with someone on Instagram who talked about the importance of biblical authority and that being a hill worth dying on among the many things one might get into conflict and argument about. Here are some of the thoughts I shared on my side of the conversation. I thought they might be of interest to a broader audience, including readers of this blog.

That the Bible is the judge and the standard against which everything else is to be judged is indeed the hill to die on, if the Bible is the very words of God and not those of human authors. If it is genuinely the latter, then making it judge and standard is idolatry, a substitution of that made with human hands in place of God.

It sounds like you are looking to transcend the uncertainty that is inherent in being human, and have made the illusion of certainty your definition of true religion.

You affirm human fallibility, but want to believe you can have the correct beliefs with certainty despite your fallibility, so you make an idol of the writings of other human beings and treat them as though they are the words of God. This is a common expression of human hubris: to claim that humans have inherent limitations to our fully knowing and understanding, and yet to claim it does not apply to me and/or my group since God has revealed something that allows us to not be affected by those limitations. If one is honest, this cannot possibly remedy the situation unless not only the authors of the sacred texts, but also the copyists who transmitted them, the interpreters who were involved in delineating the canon and who influence our understanding, and we ourselves also lacked the supposedly universal human limitations and so did not prevent the perfect divine revelation from being apprehended and believed correctly. All this might be merely wrong rather than deeply offensive were it not for the penchant for inerrantists to say that they are the ones who humbly submit to God while their detractors hubristically put themselves in the place of God, when it is quite clear that the reverse is the case.

God Said It. I Believe It. That Settles It.

Brett Kavanaugh and the Crisis of Authoritarian Truth

Michael Gerson: Conservative reaction to the “1619 Project” is “disappointing” 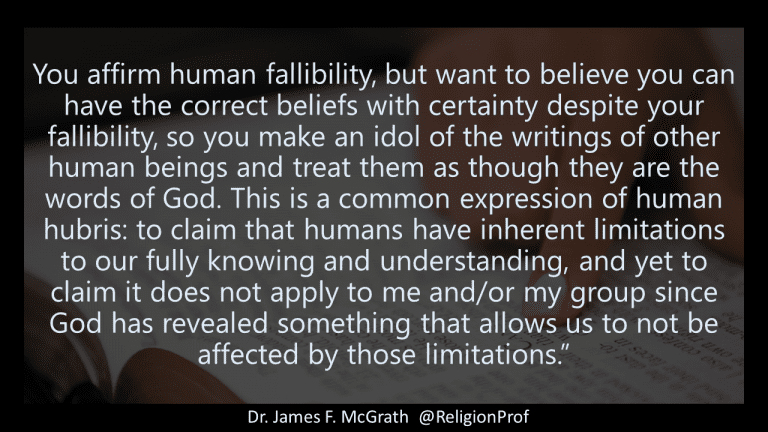 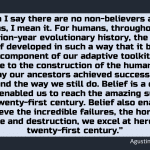 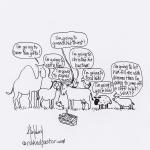 May 17, 2020 I'll Believe in Demons When Pigs Fly
Recent Comments
0 | Leave a Comment
Browse Our Archives
Follow Us!