For nearly two millennia, Christian views of Jews and Judaism were almost exclusively critical and even hostile. In the first four centuries of the Common Era, Christians increasingly defined themselves in opposition to Jews. This antipathy was manifest in an extensive range of polemical literature whose main arguments became entwined with formative Christian self-understanding. Beginning with the Christianization of the Roman Empire after the fourth century, Jews faced not only polemics but also legal discrimination. While sometimes tolerated in medieval Christendom, they also were sometimes the victims of terrible violence (especially after the year 1000). This long, baleful, anti-Jewish tradition was transmuted in the modern period into racialist hatred and aided the Nazis in their nearly successful genocide of Jews in ostensibly “Christian” Europe.

The crisis of conscious catalyzed by the Shoah compelled many Christian communities and theologians to—for the first time in history—critique long-unquestioned, hostile religious assertions about Jews and Judaism. Theologically, the challenge was wide-ranging and included fundamental questions about, for example, how Scripture is read and interpreted, soteriology, ecclesiology, liturgy, and even basic language and terminology.

For this special issue of the journal Religions on Christian Theologies of Jews and Judaism, we invite submissions that examine particular aspects of the developments in Christian thought in the aftermath of the Shoah. While we welcome submissions that engage biblical, pre-modern, or modern authors and texts, all essays should relate these topics to the dynamic changes that have taken place in Christian theology in the past seventy-five years. Also welcome are submissions employing diverse methodologies, which can be drawn from the fields of theology, religious studies, history, sociology, and others. We especially invite submissions that make constructive theological contributions to the emerging new relationship between Christians and Jews.

The following questions may be considered, but the list is not comprehensive:

1. What approaches are being used to re-evaluate Christian theologies of Jews and Judaism?

2. What issues remain to be addressed or have only been partially addressed?

3. What have been the most difficult or divisive issues in Christian re-evaluations of Jews and Judaism, and why? What are possible ways of addressing these issues?

4. How have our views of history (and the telling of history) changed as a result of a commitment to re-thinking Christian views of Jews and Judaism?

5. How have Christian efforts to overcome anti-Judaism impacted Christianity? What areas of Christian life and thought need to be further reconsidered because of these changes?

6. How has the topic of Christian mission to Jews been re-evaluated?

7. What role is there for Jews in Christian re-evaluations of Jews and Judaism?

8. Are their necessary or recommended changes to Jewish theology as a result of the developments in Christianity?

We welcome preliminary submissions of proposals for articles (up to 300 words) and will provide feedback and suggestions. You can reach the guest editors at ijcr@sju.edu.

Deadline for manuscript submissions: 1 May 2021. 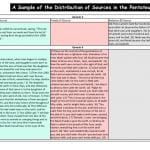 June 17, 2020 Flood Fractures in Genesis
Recent Comments
0 | Leave a Comment
"Moses was so humble that he wrote about himself that he was the humblest man ..."
James F. McGrath Tampering with the Words of the ..."
"I share your concern, very deeply. I take your point about blatant lies as compared ..."
Robert LIMB Christians and Internet Rumors
"Then let me be clearer. These sites have been infected with Trump hatred all through ..."
Bob Shiloh Christians and Internet Rumors
"He is a humble man. He is the transcriber. God's acts is a mystery to ..."
Herrnhut Tampering with the Words of the ..."
Browse Our Archives
get the latest from
Religion Prof: The Blog of James F. McGrath
Sign up for our newsletter
POPULAR AT PATHEOS Progressive Christian
1