Doctor Who: Sequels to Human Nature

Paul Cornell has written a few very short stories to help you make it through the lockdowns and quarantines that you may be experiencing. The first is “The Shadow Passes” and is in text form. The second, “Shadow of a Doubt,” will immediately remind you of Christian discussions of repentance and the idea that “all you need to do is say sorry.” The third is called “The Shadow in the Mirror” and gives another perspective on the story. The discussion of topics like sin and mercy are profound and provocative. Perhaps most timely is the reference to how “family of mine” had become who they had in response to injustices they and their own people experienced. The potential for experience of injustice to turn into practice of injustice is one of the reasons revenge is so pernicious – and why forgiveness and breaking cycles of retribution is so crucial. Also interesting are the hints in the original ending of the television episode which are picked up here, to the effect that the judgment/vengeance on the youngest of the Family of Blood is most merciful and the Doctor checks in on her regularly. Whatever one’s view of efforts towards restorative justice, could most or all agree that it is appropriate at least in the case of younger offenders? But in this story, the offender does not appear sorry at all. Not in the slightest. Should they get a chance for restoration and a future of their own determination even so?

See the discussion on IO9 and on Bleeding Cool, as well as on Paul Cornell’s own blog:

Other Doctor Who stories have been released to help you cope with the pandemic. One is a tribute to Sarah Jane Smith.

Cornell is a Christian, and his wife, Caroline Symcox, is a minister. Symcox wrote what is certainly my favorite Doctor Who audiobook, The Council of Nicaea.

Doctor Who: The Council of Nicaea

See also another new Doctor Who story not on television that has biblical connections: All Flesh Is Grass. It is apparently about the attempt to cheat death.

Of the slightest tangential connection with this post, here’s music with a related theme: Time, Space and Change: Music by Ed Hughes 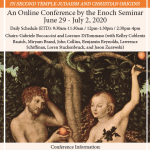 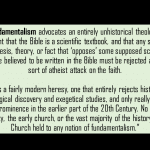 June 9, 2020 Two American Heresies
Recent Comments
0 | Leave a Comment
"Interesting point. But I think not entirely the one you intend. My conscience tells me ..."
JamieHaman Jesus Burdens Our Religious Freedom
"You're a tease, James, serving מָמוֹנָא of book and journal publishers."
robrecht The Writing on the Floor
"Wow, there are a lot of claims in there for which I can find no ..."
James F. McGrath The Writing on the Floor
"You're the only one here who appears to be ignoring things. The texts included in ..."
James F. McGrath Tampering with the Words of the ..."
Browse Our Archives
get the latest from
Religion Prof: The Blog of James F. McGrath
Sign up for our newsletter
POPULAR AT PATHEOS Progressive Christian
1