Following Jesus by Departing from his Teachings

What Paul has done here is specified that although Jesus taught something, and although he is saying this based on his own opinion, it is nonetheless something which aligns with Jesus, even as it departs from what Jesus has explicitly taught.

For Paul, the way to modify or ignore what Jesus said was by looking at the trajectory of Jesus’ overall teachings and using that as a judge for how to evaluate their place in each new context.

In this case, because Jesus’ goal was believed by Paul to be to promote peace, there was a need to honor the Spirit of Christ by modifying the stringent rule which the Historical Jesus gave.

According to Paul, because of the different circumstances and contest they found themselves in, they were no longer “bound” by the rule Jesus gave (at least, not in the way that he gave it for his own specific context).

In truth, this way of reasoning was in line with how Jesus himself taught. For Jesus had during his own lifetime taught that the Sabbath laws and Temple laws should be ignored if they ever began to hurt those practicing them, rather than uplifting them.

When It’s Okay to Ignore Jesus

In the past I’ve written about the way the early church practiced a form of discernment that decided that clear teaching of scripture was not going to be followed. I’ve also tackled something that is perhaps even more radical than the idea that Matthew Korpman expresses, that one might depart from Jesus’ teaching and yet be true to it in a more profound sense than merely rigidly adhering to his precise words despite a change in context. I’ve written about the possibility that Jesus might simply have been wrong about some things.

You may also want to have a listen to the ReligionProf Podcast episode with Matthew Korpman in which we talk about his book Saying No To God. His recent blog post suggests a possible title for a sequel: Saying No To Jesus… 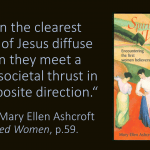