I was struck recently by the fact that 144 is double 72, the number of disciples that Jesus is supposed to have sent out at one point, according to the Gospel of Luke. Some manuscripts have 70, some 72, and I don’t have a clear sense that one or the other is much more likely to be original. Both 7s and 12s had symbolic resonances within Judaism. 72 is 6×12 and 12 has apostolic as well as Israelite resonances. But 6 such groupings is less than obvious in its significance. 10×7 is also unclear as to what it might represent. Instinctively we might want to think that the larger group was an expansion on the earlier mission by the twelve and so their number should be a multiple of 12. But that might be the logic that led a scribe to “fix” 70 and make it 72. The stories of miraculous feedings feature twelve baskets and then seven baskets. Perhaps that pair of stories inspires the addition of a group of a multiple of seven following up on the mission of the twelve. Some see an expansion from focusing on Israel to including Gentiles in the numbers in both cases.

When we get to the much larger group of 12x12x1000 in the Book of Revelation, what is the significance of the number, and how might it connect with the resonances the numbers had for readers? It is noteworthy that the author of Revelation takes pains to make all of the members of that group male virgins. By way of contrast, it has been suggested that the original 72 were sent out in pairs, perhaps married couples who could baptize people of different genders in ways that would not have ignored what was considered proper. Those could be pairs within the 72, and so 32 couples, 3×12. But if most or all of the 72 consisted of a single individual that Jesus sent out, who then traveled together with a spouse or other collaborator as a pair, that would make the number of those who went out in fact 144. If that was how this text was understood (and perhaps even if that isn’t how it was understood, for that matter) the author of the Book of Revelation may have been responding to a more egalitarian idea of Christian leadership and seeking to assert a more patriarchal vision. That book, perhaps ironically, features four women in two contrasting pairs, as Paul Duff notes in his book Who Rides the Beast? There’s Jezebel and the woman clothed with the sun, Jerusalem and Babylon. See chapter 7 of Duff’s book, “The Women of Revelation,” for more on this.

I don’t have a clear sense of the significance of these numbers within and between these texts. But picking up on resonances and wondering about them, I thought I would jot some of these thoughts down and share them with a wider audience that may have additional insight to share. If you do, I’d love to hear what you think!

Of related interest in the blogosphere recently are the following:

The Firstfruits of the Lamb – Revelation 14:4-5 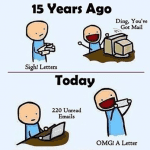