Doctor Who: State of Decay

“State of Decay” continues what would turn out to be a trilogy of stories set in e-space. The story is set on a world where the way of life is reminiscent of Europe’s medieval period on Earth. The reason for this, we later learn, is that the rulers prohibit science and learning. Indeed, we are told that not only reading but “All science, all knowledge is forbidden by the Lords. The penalty for knowledge is death.” This is clearly a caricature of the supposed opposition by religious authorities to science, education, and knowledge. In practice, I doubt that anyone has ever overtly outlawed knowledge. There are, of course, more subtle ways of rejecting learning and scientific progress, but these usually require some nuance and finesse to succeed for any length of time. The reason for this, as we also see in the episode, is that people are naturally curious about that which is directly prohibited. You can learn that in Genesis 2-3 as well as in other places. In the episode there are rebels who are seeking to rediscover scientific principles.

All of that is essentially a set-up for the making of a point that connects what we have been discussing with the Doctor’s principles of nonviolence: “The Doctor is not weaponless. He has the greatest weapon of all – knowledge.”

There is a lot of focus on “three who rule” which has natural resonances with the Trinity, of course, albeit only in a vague and superficial way. There is a mention of the Brothers Grimm and consonantal shifts, allowing a connection to be made between the names of the original ship officers and the current rulers. They discover that the tower is the remains of an Earth spaceship in which they arrived here, the Hydrax. But far from the three rulers being the descendants of the original crew, they are the same individuals, having found a vampiric way to extend their lives. The episode thus features fuel tanks filled with blood and bodies drained of blood. Vampires of some description appear on Doctor Who more than once. In this episode we encounter the idea that myths may ultimately stem from something real–and at least supposedly scientifically explicable, of course. They note that there are vampire legends on almost every inhabited world, including a ghost story told to the Doctor by an old hermit on Gallifrey about a war between the time lords and giant vampires. Watching today, one will be amused by the notion of the “Record of Rassilon” having been included on Type 40 TARDISes…on punch cards which allow one to make a printout!

This episode shows Adric as what he was during most of his time in the TARDIS, a liability, likely to be gullible and fall for the offer of power and eternal life extended by vampires. Bats and the method of killing a vampire, a stake through the heart, all feature, even if in an updated form with at least a veneer of added science. Anyone who has read the quintessential classic of the vampire genre, Bram Stoker’s Dracula, knows that this genre is replete from its origins with religious imagery and resonances. And so the episode “State of Decay” would have provided religious resonances in the background and indirectly regardless. But a number of themes intersect in a much more direct fashion.

What are your thoughts about this episode, and perhaps more broadly, about the fact that classic myths, fairytales, and religious motifs get recycled in updated form time and time again in science fiction? Sometimes the impression is given that this “disproves” religion, or the existence of vampires. And yet, as I’ve said before, the actual result is a kind of literalism that treats more of the myth as “true” than would most who study the human literature it derives from.

August 14, 2020
#CFP Call for Book Chapters: Jesuits in Science Fiction: The Clash of Reason and Revelation on Other Worlds
Next Post 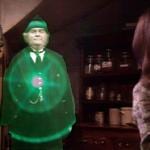 August 16, 2020 #CFP Critical Approaches to Horror in Doctor Who - Chapters Sought
Recent Comments
0 | Leave a Comment
Browse Our Archives
get the latest from
Religion Prof: The Blog of James F. McGrath
Sign up for our newsletter
POPULAR AT PATHEOS Progressive Christian
1