Thurs Sept 17 @ 7pm
TheoCon Thursday w/ Church of the Geek “Anointing Fantasies: Swords, Spells, & Messiahs”
Register at http://bit.ly/TheoConThursday
Prophecies surrounding figures in fantasy are commonplace. How is the concept of being chosen and anointed illustrative of the notion of messiah?

Fri Sept 18 @ 6pm-7pm
TheoCon Happy Hour w/ God Loves Geeks
Register at http://bit.ly/theoconhappyhour
Bring your favorite beverage in your favorite glass, mug or flagon and join Pastor Will Rose of “God Loves Geeks” facilitates a conversation about participants fandoms, what their reading, watching, or listening to in the pop culture world. In the words of Church of the Geek “What are you geekin’ out on today?”

Fri Sept 18 @ 7:30pm-8:30pm
From Black Face to Black Panther: People of Color in Pop Culture from 1830s to Present
Register at http://bit.ly/BF2BP
Black face minstrelsy in the United States was popularized in the mid-19th century in the form of art and entertainment. White actors would use charcoal to blacken their face, imitating what they perceived as Black life, perpetuating negative racial stereotypes such as: “the happy darky,” “the lazy negro,” and “the noble savage.” These negative stereotypes reinforced over time, painted a skewed narrative that continues to impact interactions between white and non-white communities today. However, as a result of communities working together, civil rights movements, and national events, trends in character depictions evolved and became more racially and ethnically integrative over time in arts, entertainment, and in the comic book world. We thus see a shift from Black face to Black Panther.

Sat Sept 19
One Registration Link to Rule Them All!

12:30pm Holy Fusion: Relationship and Identity in Steven Universe w/ Rev.Kimberly Berenotto
If we are lucky enough to be like Steven, our lives are filled with a rich diversity of meaningful relationships with varied people, and much of our self-identity can be tied up in those relationships as well. Join us as we dive into the world of Steven Universe to discover the ways “fusion” in this popular animated series represents the beautiful ways we interact with each other and ourselves. We will search for the holy within the relationships between the Crystal Gems and maybe find some “fusions” in Christian history: Creator, Christ, Holy Spirit…and Steven!

1:00pm Losing My Religion: Faith and Fear in the “New Trek” w/ Matthew Regan
One of those most striking features of the most recent Star Trek television series (Star Trek: Discovery and Star Trek: Picard) is the series stark confrontation with the differences between the values claimed by Starfleet and the Federation and the actions of those in power. Although such a conflict has always been an element of Star Trek stories, from the dangerous decisions of Commodore Matt Decker in “The Doomsday Machine” to the actions undertaken in the Dominion War during the latter seasons of Deep Space Nine, in previous series these incongruities have always been understood as the result of personal character failings or imperfect resolutions of tragic moral choices. The newer series, on the other hand, appear to have a much greater suspicion of the values of the Federation itself: Are they as noble as they seem? Are the moral aberrations of leaders we observe flaws or features of the system? Among fans of Star Trek, this new approach has inspired both praise and criticism—with some enjoying the continued development of the themes of the franchise and others claiming the new shows’ creators have “turned their back” on the vision of franchise creator Gene Roddenberry. This presentation argues that this conflict can be viewed as an example of a “crisis of faith” and how both the themes of the new series and fan reactions to them can be viewed as responses to conditions in which deeply held belief systems are challenged by personal or social change.

1:30pm Theology of Adulting in the Films and Fandom of Wes Anderson w/ Joshua Hollman
Wes Anderson is one of the most creative, perceptive, and evocative writers and directors making movies today. His films and fans reflect the preoccupations and imaginations of our secular and spiritual age. He has invented an original visual aesthetic, and his scripts and films are meta, multi-layered, and amusingly wistful. With pop culture fastidiousness, Anderson playfully combines past (nostalgia) and possibility (whimsy) in quixotic attempts at adulting and finding love. Fictional and non-fictional times and places are blurred in the present quest to come of age as one’s self in dialogue with ages before. Just like Wes Anderson’s films, which pay homage to past influences, this paper will name why Wes Anderson fandom is important by approaching coming of age as one’s authentic self and coming of age through conversation with theologians and thinkers from the past (sacred text and tradition) from Max Fischer in Rushmore to the Prodigal Son, and Moonrise Kingdom (2012) to Augustine, Søren Kierkegaard, and Paul Tillich. Wes Anderson’s oeuvre focuses on coming of age as framed through the artistic vision of nostalgia (past inventiveness) and whimsy (present inspiration). Given Wes Anderson’s popularity and his knack for creatively projecting the zeitgeist of millennials and gen x, this paper reflects on how his films reveal the theology of adulting. This paper presents a fandom synopsis (8-10 minutes) of a fundamental/fandomental chapter of the forthcoming Theology and Wes Anderson for the Theology and Pop Culture Series of Fortress Academic and Lexington Books.

2:00pm God, Grief & Goodbyes: Death of Superheroes in Comics and Real Life w/ TheoCon Panel
Chadwick Boseman’s death has changed many of our lives forever. Although we celebrate his life and legacy, his transition from labor into rest has prompted critical questions that we must confront as there have been numerous losses of this kind over the years. How do we help our children to grieve real life superheroes? How do real life and or on-screen death of actors and or characters shape fans and fandoms? And exploration of rituals and ceremonies to assist in the grieving process. 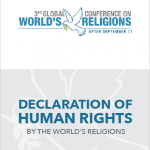 September 11, 2020
Universal Declaration of Human Rights by the World’s Religions
Next Post

September 13, 2020 Religion and Science Fiction: The Musical Episode with Space Hippies
Recent Comments
0 | Leave a Comment
Browse Our Archives
get the latest from
Religion Prof: The Blog of James F. McGrath
Sign up for our newsletter
POPULAR AT PATHEOS Progressive Christian
1