At What Point Repentance?

There is a national discussion happening about whether the best way forward for the United States during the Biden administration is to pursue criminal investigations and charges against Donald Trump for things he did while in office, hopefully going hand in hand with something like a Truth and Justice Commission that works to accomplish reconciliation and healing through that kind of painful honest reckoning; or whether it is better to move on, accepting that few will change their minds as a result of that approach and that there is reason to believe that the next generation will be lest racist and more supportive of social justice than their parents and grandparents were.

Similar discussions are happening about the future of conservative Evangelicalism as are taking place about the nation as a whole. The widespread uncritical support for Trump, going so far as to believe his claims to have won an election that he lost by every possible measure, shows that there is an issue in the nation and in churches. There is an embrace of hatred and racism where our better angels have long called us to inclusion, equity, and justice.

It is not limited to the south nor to white Evangelicals but it predominates in those contexts. I am not surprised that a regional culture that has spent a century and a half denying that it lost the Civil War is persisting on a course of denialism and bigotry. I have never been a southerner and so don’t really understand it. However, having previously been a conservative Evangelical myself I am both unsurprised and astonished at the same time at what I see going on. On the one hand there is a lot of training one received in an Evangelical context to overlay frameworks of interpretation on everyday events that connect them with the work of unseen forces. There is a persistent theme of rejecting mainstream knowledge, which expresses itself in a rejection of some but not all of society’s moral values, and some but not all of the conclusions of scientific study of the natural world. Those things are not, however, inevitable in Evangelicalism, and so it cannot be viewed as the cause of what we are seeing politically. On the other hand, there is a strong emphasis on repentance in Evangelicalism, and that seems to have been abandoned entirely. There is no introspection, no willingness to entertain the possibility that, as a sinner, one might be wrong about Trump. Truth be told, even when I was in an Evangelical context one did not always find these things embraced. While most affirmed equality of all human beings against racism, I heard appalling things from an individual in my youth group that even now astonish me when I think about them.

The issue is that even those who are committed to the importance of introspection and repentance have trouble seeing themselves. I’d thus like to offer a variation on the famous saying that those who look for Jesus tend to see their own reflection gazing back. Although George Tyrell offered the famous image of peering down a well, Albert Schweitzer (in The Quest of the Historical Jesus) wrote these important and insightful words:

[E]ach successive epoch of theology found its own thoughts in Jesus; that was, indeed, the only way in which it could make Him live.

But it was not only each epoch that found its reflection in Jesus; each individual created Him in accordance with his own character. There is no historical task which so reveals a man’s true self as the writing of a Life of Jesus. No vital force comes into the figure unless a man breathes into it all the hate or all the love of which he is capable. The stronger the love, or the stronger the hate, the more life-like is the figure which is produced.

The question is not whether we see our own reflection. Jesus does provide a fantastic mirror. The question is whether we see ourselves more clearly by looking at him and are led to repentance and change, or we see him as just like ourselves and find affirmation for all our biases and bigotry. A mirror only helps us if we are willing to look at it with absolute honesty and to do something about what we see there.

Alas, many are so convinced that they are right, that they are God’s side and God is on theirs, that they have closed themselves off to the point where even God will not be heeded. It might be a true axiom to say that those who are most persuaded they are doing the will of God are the ones least likely to actually be doing it.

Whether one thinks of God and Reality as one thing or two, closing oneself off to either or both makes an idol, a false god, out of oneself, elevating one’s own limited human perspective with all its sinful biases and creaturely limitations, to absolute authority.

This tweet below illustrates where this eventually leads in a humorous fashion. Although this topic is literally deadly serious, sometimes the only way to get through the boundaries that are erected to defend a denialist worldview is to make good use of satire…

Two Trump supporters die & go to heaven. God welcomes them & asks if they have any questions.

“Yeah, what were the real results of the election & who was behind the fraud?”

“My child, there was no fraud. Biden won.”

One turns to the other, “This goes higher than we thought.”

Two Trump supporters die & go to heaven. God welcomes them & asks if they have any questions. “Yeah, what were the real results of the election & who was behind the fraud?” “My child, there was no fraud. Biden won.” One turns to the other, “This goes higher than we thought.”

This is the same kind of denialism and conspiracy theory thinking, characterized by a stubborn refusal to change beliefs in light of evidence, that is displayed in the heartbreaking accounts of people who are on a ventilator dying from Covid-19 and yet still insist that the disease, the pandemic, and/or the severity of these is a hoax.

Everyone is capable of shielding their beliefs from scrutiny and challenge. Indeed, most of us are extremely adept at it. The question is whether we are committed to self-examination and repentance. None of us follows that path perfectly. But some who affirm it as a defining trait of their religion appear in our time to have abandoned it entirely in practice.

See the viral video by Ned Staebler warning Michigan GOP officials of judgment to come when they meet their maker.

Dame magazine had an article highlighting repentance as precisely what is needed in the present circumstance.

John Pavlovitz shared a powerful message to his older family members saying that he rejects Trump precisely because of the values they instilled in him growing up. While the older generation often accuses the younger of having fallen away, apostatized from the faith and family values, sometimes they are the ones that have compromised and departed from those core values.

David Dark wrote about how peer pressure is a factor in ongoing Republican support for Trump, highlighting the process that this is something that none of us is immune from.

Study: White Evangelicals are “cultural others” and the culture wars are getting worse

In Order to Move Forward We Must Believe the Unbelievable: Some Choose Death Over Democracy

Record Numbers Voted for More Death and More Racism; Can We Really Just Come Together as a Nation?

President Trump is a religious leader

There is Another Reason Trump Refuses to Concede the Election

Cherry-Picking in the God Gap: A Post-Election Conversation on the Religious Vote and the Battle to Spin it

We Can Finally Put the Lie to Trumpism: 5 Myths Debunked By a Biden Victory

Richard Beck on how politics becomes a “holy war”

A message from the Arizona secretary of state

A blogger who cannot understand why any Christians voted for Biden

Religious diversity and the election 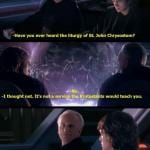