When Donald Trump makes his claims about voting fraud and the election being “stolen,” he is using a tactic that is familiar to those who have made efforts to combat conspiracy theories and other misinformation about science, history, medicine, and politics. It goes something like this (with apologies for the language used—this isn’t my creation): 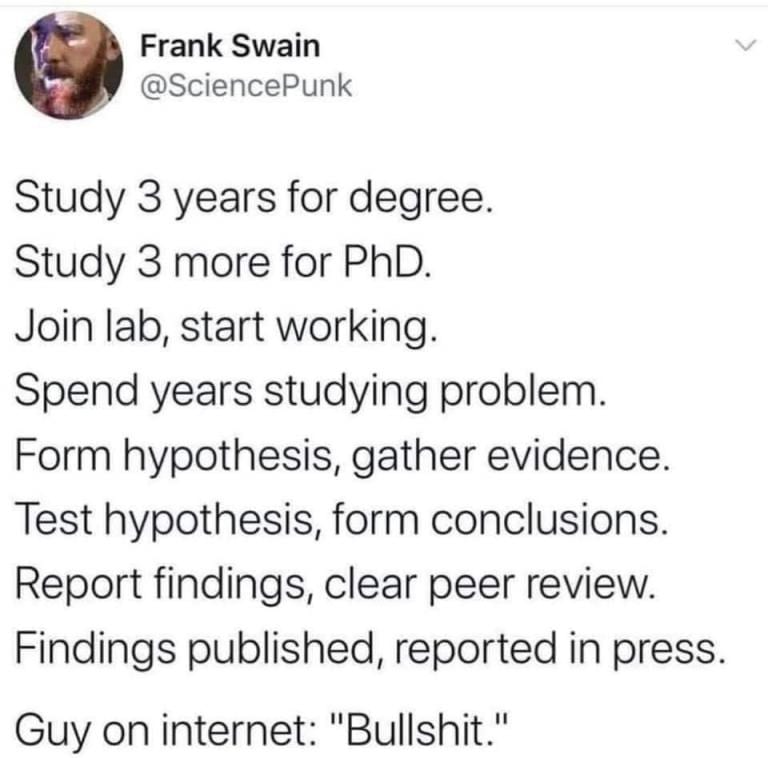 An election was held that coordinated the collection of millions of data points (votes). These are not gathered centrally but are surveyed and studied by local government authorities all around the country. The results are then collated, much as happens when a scientific theory is assembled to make sense of individual pieces of data. An individual fossil such as that of Tiktaalik, or the evidence from the human genome of chromosomal fusion, do not make the case on their own. It involves careful study of such evidence, and then the bringing of it together in an explanatory framework.

In the case of the recent election, the data has been studied and scrutinized and an interpretation of that data has become clear as a result. It points unambiguously in a particular direction. As with evolution-deniers and flat-earthers, so too in the case of Donald Trump’s response: “prove it.” This unreasonably asks the individual with whom they are conversing to start from scratch and revisit every step in the entire process. The one posing the skeptical “prove it” will proceed to try to cast doubt on each piece of evidence presented, refusing to accept the interpretation thereof, preferring their own.

I think a key to responding to denial of mainstream knowledge is to ask the one demanding that you prove the results of the coordinated efforts of biologists, geologists, historians, or election officials: what have you done to prove your claims? Not only has Trump not proven voting fraud, he also has not proven that he has received any particular number of votes. How should he? How could he? What he demands that Joe Biden must do in order to be allowed to take his place in the White House, Trump himself must also be demanded to do, if you think the demand made of Biden is reasonable.

Let me put the matter another way, somewhat more succinctly: If we want to evaluate whether Trump supporters are genuinely committed to American democracy, perhaps we need only ask one simple question: Do they believe that Joe Biden is innocent until proven guilty?

Alas, it seems that Trump supporters, like young-earth creationists, Holocaust deniers, and countless others in this category use selective skepticism as a weapon against others. But skepticism is only rightly called that if you’re willing to rigorously apply it to your own assumptions and views. In the case of supposed massive voting fraud, we’re supposed to believe that the President of the United States is powerless to prevent mysterious nefarious forces from carrying out illegal activities of the same sort in thousands of locations nationwide without being caught.

That’s the essence of conspiracy theory right there, and the essence of what is wrong with it as well. Conspiracies do happen, but when the carrying out of a conspiracy requires a level of coordination and secrecy that is beyond belief, it is more logical, more scientific, to accept a simpler alternative.

Also related to information, trust, fact-checking, bias, and the like:

A call for papers (with the deadline today!) on disinformation.

A comment on an older post of mine, “What’s Wikipedia Worth?”, drew my attention to accusations of bias that have been leveled against the site’s editors. It would be interesting to look at the editing history of the page(s) about the 2020 presidential election.

A positive view of Wikipedia in WIRED

There was discussion of this more than 10 years ago in connection with the creation of Conservapedia as an alternative to Wikipedia. The decade since then has of course been characterized by the rise in misinformation, often coupled with claims that mainstream facts are “fake news.”

What is better than Wikipedia?

“A Decade of Writing on Wikipedia”

In a strange twist, I then discovered that the purveyors of misinformation at the Discovery Institute were annoyed by some things I shared related to how fundamentalist Christians might respond to a discovery of life on Mars. Ironically, that came to my attention on the anniversary of the Kitzmiller trial!

Editing Wikipedia as a classroom activity/student assignment is often motivated by concern for social equity.

Seeking the Courage to Know What Matters

Conspiracy theories and combatting the pandemic

November 29, 2020
Review of Six Impossible Things Before Breakfast
Next Post