The Theology of Post-Election Prayer

Rabbi Harold Kushner wrote that it makes no sense to hear the sound of fire trucks and pray that it not be your home that is on fire. At that point a home is already burning. What would a prayer that it not be your house mean, especially if that prayer could be answered? That the flames be miraculously relocated to another house, and the memories of the fire department rewritten as the destination to which they are dispatched is altered as they are already en route?

The same applies to elections. There is a natural convergence of the conservative Christian desire to flout the separation of church and state, and their prayer that the democratic process would be miraculously overruled. In one case they are appealing to God to prevent democracy (as defined in, among other things, the first amendment to the United States constitution) from functioning. In the other they are actively working against it themselves.

The reactions to the outcome of the 2020 election on the part of conservative Evangelicals should be observed closely. It tells us a great deal. It tells us about their theology, and/or their lack of serious reflection on matters they claim are truly important. It tells us about their view of democracy. And quite frankly, it also tells us what kind of people they are. That they do not care about the rights of those with different views from theirs is seen clearly in the policies they advocate for, the politicians they support, and in the prayers they offer hoping that God will invalidate the will and votes of others when the majority view is not their own. That includes when the majority is converging not around a specific matter of national policy so much as the very question of commitment to democracy as the United States practices it and the status of minorities and diversity within our society.

It is a symbol and monument to the freedom of religion the first amendment safeguards that however heretical, selfish, illogical, and mean-spirited the prayers of conservative Christians may be, they are free to pray thus. It is nonetheless sad that they cannot appreciate that the very legal framework that protects this right of theirs also protects others from having conservative Christians impose their problematic theology on them.

Here is the full quote from Harold Kushner’s famous book, When Bad Things Happen To Good People, that I made reference to at the beginning of this post:

The Talmud, the compilation of discussions of Jewish Law which I have quoted earlier in this book, gives examples of bad prayers, improper prayers, which one should not utter. If a woman is pregnant, neither she nor her husband should pray, “May God grant that this child be a boy” (nor, for that matter, may they pray that it be a girl). The sex of the child is determined at conception, and God cannot be invoked to change it. Again, if a man sees a fire engine racing toward his neighborhood, he should not pray, “Please God, don’t let the fire be in my house.” Not only is it mean-spirited to pray that someone else’s house burn instead of yours, but it is futile. A certain house is already on fire; the most sincere or articulate of prayers will not affect the question of which house it is.

Below are other links related to this topic. First, here is the racist background to Paula White’s reference to summoning angels from Africa explained on Twitter:

Hi 🙂 I was raised Pentecostal, in a tiny cult in Louisiana. My grandfather was a missionary.

(Yes, I've reclaimed the Judaism from the other, Sephardic, not-Pentecostal side of the family.)

Anyway, a multi-part answer because it's too long for one tweet.

Pastor: House Dems Should Switch Parties So GOP Can Have “220 Righteous” Seats

Prayer in tongues to support Trump 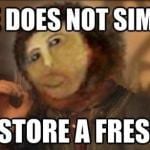 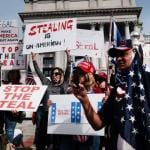 November 8, 2020 What Next for Trumpism?
Recent Comments
0 | Leave a Comment
Browse Our Archives
get the latest from
Religion Prof: The Blog of James F. McGrath
Sign up for our newsletter
POPULAR AT PATHEOS Progressive Christian
1