What Jesus Learned from Mary

I thought about calling this blog post something more controversial, like “Jesus did you learn what Mary knew?” It would have highlighted the theme and indicated that this was inspired by my thoughts about the song “Mary Did You Know?” and the response to it I shared yesterday. The best comment I received in response to the thoughts I shared there was from someone who pointed out that all mothers think their sons are God and can walk on water!

But on a more serious note, today I thought I would share some glimpses into my forthcoming book What Jesus Learned from Women which I mentioned yesterday, and which my editor at Cascade says will be out in the first half of 2021. I write a lot about Mary in the book, and I think a historical approach to her can and must say more about what Jesus’ life and teaching owed to her than most historians and songs do.

Here’s your teaser taste of what’s to come in my book:

Mary may or may not have been given an opportunity for formal education, but that doesn’t mean she was not as serious a thinker as most in her time whatever their gender…Mary may or may not have been able to read the stories of others or write down her own thoughts, but that has no bearing on whether she was able to articulate her own perspective and weave narratives with eloquence, and to teach her son to do the same…Jesus’s most famous prayer, “your will be done,” whether we have in mind his own desperate utterance in the Garden of Gethsemane or his instructions to his disciples, is not that distant from Mary’s “Let it be unto me” (Luke 1:38)…Considered historically, the fact that Luke, the earliest author to record Mary’s ongoing involvement in the church, also depicts Mary’s own poetry and prayer being echoed in those of Jesus, deserves to be taken very seriously…

The Gospel of Luke attributes words to Mary, and what she says is noteworthy, especially when we consider them in relation to the words attributed to her son. The Magnificat (Luke 1:46–55) depicts Mary emphasizing that God would bring about a reversal of the situations of rich and poor. In Luke’s version of the beatitudes (6:20–26), Jesus emphasizes the same thing. Together these texts convey the impression that Jesus learned these things from his mother…For our purpose, it doesn’t matter whether that letter was in fact written by James the brother of Jesus, any more than it matters whether the Magnificat reflects an actual utterance of Mary. From a historical perspective it is sufficient that multiple early Christian authors indicate they had this impression of what Mary’s teaching was and that she instilled these values in her children…

Mary’s song takes up themes from the Hebrew prophets in distinctive ways, and then her son Jesus in turn takes them up and elaborates them…Readers of Luke’s Gospel get the sense both that Mary had been educated in the Scriptures, and that she passed on her own education to her son who carried on in a manner faithful to his upbringing…Luke’s Gospel emphasizes that Jesus learned (Luke 2:52). Luke is also the only Gospel author who gives us material that provides us with the opportunity to learn from the one from whom Jesus learned, by attributing words filled with rich content to his mother, content that would be echoed in Jesus’s own teaching. In theory Luke could have provided examples of what Jesus might have learned from both his parents, giving Joseph a poetic utterance akin to the Magnificat. Whether he does not do so, but only offers us information about the theology and poetic ability of Jesus’s mother, because that was all the information that reached him, or because it was what he judged most important and interesting out of a wider array of information at his disposal, we cannot say for certain. Perhaps it was because of her ongoing voice as active participant in the Christian movement…Luke more than any other Gospel author was aware of and had information about the kind of person Mary was and what she had to say. In depicting continuity between mother and son in their words and emphases, Luke provides us with a natural place to begin exploring what Jesus learned from women, with the woman he learned from first. 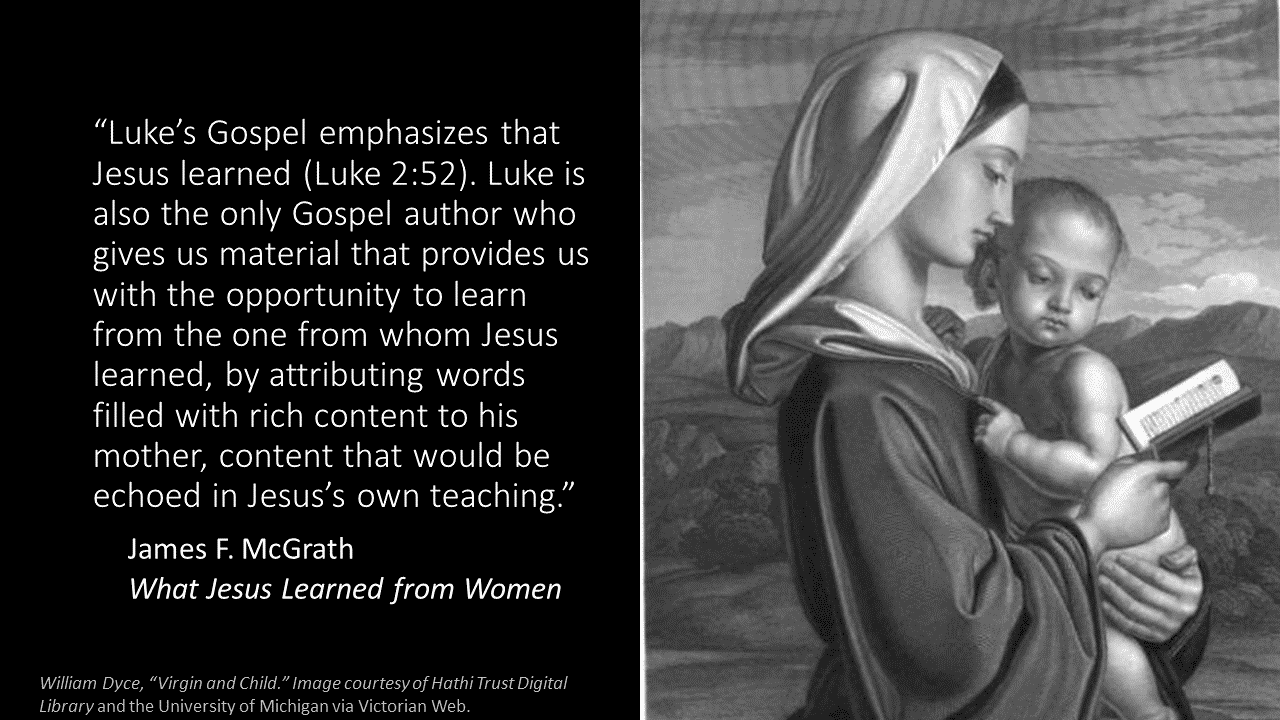 The image in the meme is William Dyce’s “Virgin and Child” which depicts Mary reading a prayer book as Jesus looks on. The image is used courtesy of Victorian Web which in turn gives credit to the Hathi Trust Digital Library and the University of Michigan. 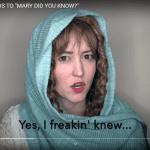 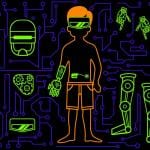 December 18, 2020 Teaching Cyborg Students
Recent Comments
0 | Leave a Comment
Browse Our Archives
get the latest from
Religion Prof: The Blog of James F. McGrath
Sign up for our newsletter
POPULAR AT PATHEOS Progressive Christian
1