January 6th, 2021 will be a day for the history books. On it we saw firsts in Georgia and in Washington DC. Georgia elected its first senators who were of African descent and Jewish, while soon after we saw a coup attempt in the nation’s capitol. The supporters of the president responded to his loss of the election in many ways, all reflecting denial, and eventually it expressed itself in violence.

To be clear: People can peacefully protest the shooting of unarmed black people and be met with rubber bullets and tear gas. Tear gas can be used to clear people away from a church for the purpose of a Trump photo op. But Trump supporters were allowed to storm the capitol with none of that happening when it would have if those individuals had been black. What we all witnessed is a culture that enslaved others, then discriminated against them, deciding when those they oppressed became part of a majority that outvoted them that all the talk of supporting “democracy” was just a sham that remained true only for as long as they were a majority and could get their way by voting and claim it was all moral. When they were outvoted, they didn’t embrace the outcome of the system, but attacked the system with violence.

I had been having a conversation about what to call the religious aspect of this: Christian nationalism, white supremacist Christianity, empire Christianity, or something else. Let me suggest we revive the moniker CINOs: Christians in Name Only. I think it may be particularly fitting for two reasons. One is that all but the most biased observers can see that what this movement represents is at odds with the teaching of Jesus. The other is that Donald Trump has taken to calling any Republicans who wouldn’t support his effort to retain power at the expense of democracy and the rule of law “RINOs: Republicans in Name Only.” This isn’t just a case of turnabout being fair play. It is about the first historic event of the day being connected to the second. Those who support Trump unquestioningly and think it is an expression of their “Christianity” have also attacked Rev. Dr. Raphael Warnock’s faith because it isn’t like theirs, being more attuned to the Bible’s emphasis on justice, among other things.

Christine Berghoef wrote on Facebook about the fact that some “Christians” obsessed with a particularly twisted idea of the “end times” have said that the election of a Democratic president this time around is the climax of the nation moving in the direction of ultimate evil. Echoing Berghoef I want to ask how anyone could possibly say that our earlier genocide, enslavement, segregation, and commitment to allowing the rich to amass wealth while others become destitute were not the climax of evil, but electing a Catholic and a Baptist of a particular political party allegedly is. As I wrote on Facebook so I will repeat here: This speaks so accurately and powerfully about the twisted brand of pseudo-Christianity that has wedded itself to the Republican Party and white supremicism. If your idea of ultimate evil is “the Democratic Party” but not slavery, racism, sexism, xenophobia, and everything else that Trump has pandered to these past four years, you have not merely betrayed Christ, you are immoral in a way that even most non-Christians can recognize. If I am grateful for anything about current and recent events, it is the exposure of this false gospel of American conservative Christianity as the lie from the pit of hell that it is. That so-called Christians supported violence to try to make Donald Trump a dictator would be clear enough indication of how their worldview is twisted. How much more so when they did so with some carrying signs that said “Pelosi is Satan” or carrying a Confederate flag. If you think Nancy Pelosi is Satan, you have no right to comment on anything related to religion ever.

Thanks to social media the commentary on events like these is a flood, an overwhelming torrent. That has advantages and disadvantages. Those same platforms have enabled Donald Trump to mislead significant numbers of adoring fans into believing his lies about election fraud and rigging. Here are a few tweets that stood out to me as they quickly and so ephemerally passed before my eyes, which seem to be of more long-term noteworthiness:

Ibram Kendi tweeted: “The greatest domestic terrorist threat of our time are White male supremacists who adore Donald J. Trump. But Americans are too blinded by their own racist ideas to see these terrorists for who and what they are. Will today be the day the denial finally ends?”

Michael Biesecker observed, “This is the first time the U.S. Capitol has been stormed since the British in 1812.”

Seth Abramson tweeted, “What we’re witnessing is nothing less than a terrorist attack on the U.S. government by violent and in some cases armed forces whose actions were explicitly incited by the President of the United States. Members of Congress are under threat and the Vice President has had to flee.”

But I want to end on what should have been the main focus of the day as far as its historic significance is concerned. As I wrote on Facebook, Rev. Dr. Raphael Warnock, pastor of Ebenezer Baptist Church, the church where Rev. Dr. Martin Luther King Jr. was pastor, has been elected to the senate. Warnock stands in the same historic progressive Baptist tradition that I’m a part of which has stood for inclusiveness and justice for all, and at a time when we have seen such an emergence of white supremacism and nationalist exclusivism (supported by what I think we should perhaps call CINOs, Christians in name only), this is an encouraging sign.

I write this as the events in the nation’s capitol are still unfolding. I write it in hope that I will be able to post it on Wednesday morning not with heavy editing to reflect the fact that the United States’ experiment with democracy ended, but that it survived and that both the positive events and the negative will have clarified in the thinking of a majority of Americans that pandering to a constituency that is easily duped, ready to believe conspiracy theories and other lies, is ultimately going to damage our society. The very notion of truth has been damaged in ways that perhaps it long had been in a nation that believed that the white supremacism of the Ku Klux Klan was “Christian.” We saw all this clearly on January 6th, 2021 as people attempted a violent coup while carrying banners of “stop the steal” even as others carried a Confederate flag.

Whether we learn the lesson we should from this in the long run remains to be seen. But I hope at least one thing will prove true. From now on, I dare to think that Americans will not look at coup attempts and outbreaks of violence on TV reportage from other countries with an air of superiority, thinking they are thankful they live in a place where such things could never happen…

Today Ted Cruz appealed to the Compromise of 1877. Why that isn’t such a good idea. 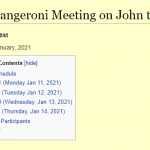 January 6, 2021
Epiphany: The Magi Arrive and John the Baptist Enoch Seminar Next Week!
Next Post 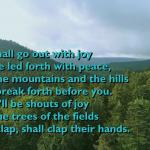 January 8, 2021 You Shall Go Out With Joy
Recent Comments
0 | Leave a Comment
Browse Our Archives
Related posts from Religion Prof: The Blog of James F. McGrath