Call for Papers: The Matrix Revisited

The cultural and social impact of The Matrix franchise is self-evident.  Its depiction of full virtualization of human consciousness presented in materialistic dystopian metaphor coincided with the rapid development of the internet as a context for global information exchange, entertainment, commerce, and cultural expression, assuring its continued currency.  The red pill/blue pill meme has been deployed across political and ideological boundaries and has already developed multivalent significances in multiple contexts; The Matrix has lent its aesthetics to innumerable derivations including parody.  However, the extent to which its specific elements constitute particular esoteric allegory or metaphor (specifically Gnosticism) remains debated; the contrary opinions it evokes in the context of philosophy adapted to popular culture is reminiscent of the appeal, allure, consternation, irritation, and occasional bemused bewilderment with which Classical pagan philosophers sometimes reacted to the original Gnostics.  Attempts to straightforwardly interpret its metaphors as illustrative of Classical or Western philosophy generally seem partial or forced, but treating The Matrix as direct Gnostic allegory also seems to miss the mark.  Nevertheless, contemporary promoters of Gnostic and/or anti-demiurgical worldviews interested in popular culture easily recognized Gnostic elements in its mythos, and the anti-demiurgical lineage of anti-Judaic movements makes the embrace of the red-pill metaphor by the alt-right explicable.  Yet, as an example of the ambiguity that specific symbolic features of The Matrix frequently evokes, the refuge of the human opponents of the machine-archons of the Matrix is called Zion.  Although Gnostic and esoteric scholarship has examined The Matrix (which for instance appears as one of the various cinematic examples in April DeConick’s work The Gnostic New Age, and which Jeffrey Kripal has described as metaphorical for esoteric scholarly inquiry itself), the same systematic analysis of The Matrix franchise as has been received, for example, by the work of Philip K. Dick has yet to develop.

With the impending release of a sequel to the original trilogy by one of the original directors and original-trilogy actors and characters recurring, and with scholarship on gnosis and esotericism itself having developed sufficiently to contextualize these phenomenon as the popular-cultural movements and influences that they are and have been, there is an opportunity for more thorough investigation of the nuances and details of the significance, impact, and influences of The Matrix, specifically in the context of esoteric, occult, and magical worldviews.

The Area for Esotericism, Occultism, and Magic at the Southwest Popular/American Culture Association seeks papers addressing any aspect of relationship, interaction, and influence between its foci of interest and The Matrix franchise.  This should also be taken to include putative influences on The Matrix including (but not limited to) genre influences such as cyberpunk, media influences such as anime, and authors such as Gibson and PKD.  Similarly, use of The Matrix as aesthetic inspiration and metaphor within esoteric, occult, and magical practice is of equal interest to examinations of the influences and representations of those worldviews in The Matrix.  The reception and influence of the “gnostic” films contemporary with its millennial origins (Dark City, The Thirteenth Floor, eXistenZ, The Truman Show, etc.) is also worthy of comparative examination, and most broadly, the significance of The Matrix in priming the dialogue and discourse surrounding the emergence and increasing popularity of immersive interactive fiction could also be considered.  Finally, its broadest influence in the context of pop-cultural metaphors and memes, and their deployment and reception, also has relevance to the popular reception of related esoteric, occult, and magical concepts (or is sometimes believed to have such relevance, amounting to a similar, though not identical, effect).  This phenomenon can itself be compared to the identification of other metaphors in The Matrix (transgenderism being a particularly notable example) and the consequent metaphoric blurring, or even deliberate identification by correspondence, with esoteric, occult, and magical ideas; such deliberate identification itself would likely be an example of the esoteric praxes of correspondence and concordance in the context of popular culture.  All disciplinary, interdisciplinary, transdisciplinary, and metadisciplinary perspectives are welcome and encouraged for submissions to this special panel, as are examinations of related media and metatextual references in The Matrix and in the work of its creators, in this endeavor to follow the metaphorical and/or allegorical white rabbit to see how deep its route goes and how closely it might follow the trail of the gnostic serpent or ascending, rise through the mechanical architecture of the celestial spheres and their reifying rulers. Connect with the Area Chair, Dr. George J. Sieg (georgejsieg@gmail.com) with all proposals and inquiries concerning participation in this special panel to be held at the Southwest Popular/American Culture Association conference meeting February 23-26 in Albuquerque.  We look forward to seeing you in person in our return to the desert of the real. 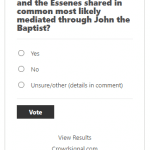 November 5, 2021
Triangulating on John the Baptist from Christianity and Essenism?
Next Post

November 12, 2021 Special Panel: Mysteries of Dune: Esotericism, Occultism, and the Magic of Melange #CFP
Recent Comments
0 | Leave a Comment
"Probably the same religion that brought us public schools, mass public hospitals, the scientific revolution, ..."
Chris H Michele Bachmann Cites Famous Social Justice ..."
"I wonder what religion it was that was responsible for the genocide of the Native ..."
Hutchins Michele Bachmann Cites Famous Social Justice ..."
"It isn't necessarily the case that her name was "changed" any more than "Saul" was ..."
James F. McGrath What Jesus Learned from Junia
"Have you by any chance had occasion to read the book, and perhaps now be ..."
James F. McGrath What Jesus Learned from Junia
Browse Our Archives
get the latest updates from
Religion Prof: The Blog of James F. McGrath
and the Patheos
Progressive Christian
Channel
POPULAR AT PATHEOS Progressive Christian
1