I have failed to blog about Picard but having watched the first few episodes of the new prequel series Strange New Worlds, I feel the need to get back to blogging about Star Trek. I have said before that Captain Christopher Pike as he was portrayed on Star Trek: Discovery quickly became my new favorite captain (it had previously been Benjamin Sisko). That owed much to the Discovery episode “New Eden” in which Pike shared that his father taught both science and religious studies. His own stance was one of well-informed openness. But if there is a risk in the stance of the open and educated, it is precisely that we can be prone to dismiss what seems to us to be dogmatism or fundamentalism. 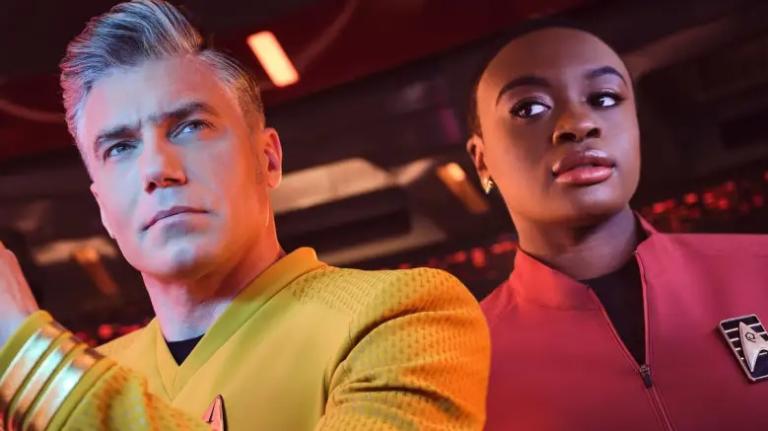 We see an example of this in the second episode of Strange New Worlds, “Children of the Comet,” which focuses a lot of attention on the character, backstory, and genius linguistic abilities of Cadet Uhura. The Enterprise encounters a comet which will catastrophically collide with an inhabited planet if it continues on its current course, unless they do something. They try to shift it and discover it has a shield around it, after which they beam down to its surface – Uhura’s first away mission. As they seek to determine the nature of the comet, which has an artificially-constructed monument or ‘something’ on it, a ship appears which says it is one of the Shepherds and that the comet it M’hanit, the arbiter of life. When the captain of that vessel insists that the comet must not be interfered with, Capt. Pike quips that while they say they are “shepherds” they sound “more like zealots.” This impression seems to be confirmed when the Shepherd says that the presence of members of the Enterprise crew on the comet is “blasphemy.” Meanwhile other crewmembers refer to the Shepherds as “crazy space monks.”

Meanwhile on the surface of the comet Uhura discovers that the operating mechanism for the shield around the comet responds to music. They sing a major chord, and discuss music as a universal language since it is rooted in the physics that all living things in our cosmos share in common. Eventually Spock uses a shuttle to nudge the comet, which not only alters its trajectory but also results in the comet breaking off a small piece that interacts with the atmosphere of the planet. They determine that this will permanently change the atmosphere of the arid world they were trying to save. Pike is astonished and asks whether it did what the Shepherd had claimed: “Did it actually…bring life?” The Shepherd tells Pike, “You have seen the mercy and the glory that is M’hanit.” Pike responds, “You’re right, we witnessed a miracle.” To that the Shepherd responds, “Perhaps in the future you will not be so quick to judge the faith of others.” As they ponder questions such as whether there are other similar comets out there, Uhura decodes some of the music generated by the comet which shows that M’hanit predicted the chunk that would break off. It “knew its fate.” This connects with the theme of the season exploring what happened on Discovery, when Pike was given a vision of the future and saw how he would die. As Pike is pondering the topic of fate, Number One asks him whether his end might not in fact be set in stone. “What if your fate is what you make it?”

On the whole as a Star Trek fan and religious studies scholar I liked the episode very much. I also enjoyed the first and third episodes, the latter giving us more about Una (Number One) and La’an Noonien-Singh, the former a character who had remained mysterious in terms of her background, the latter a character with a famous last name. As for Picard, there were some things I liked more than others about this season, but [SPOILER ALERT] the exploration of Picard’s family history and how it had shaped him, and of Q having discovered that he is dying, worked really well. The question of why Q might or might not deserve to be called a “god” has come up both explicitly and implicitly on Star Trek as well as being raised in talks and publications by academics in religious studies like myself. In the season finale, Q quips that “even gods have favorites,” which of course has always been the case in human religions with deities. What was most interesting was the way this statement reframed Q’s interest in Picard as one aimed at his spiritual and psychological growth and health rather than either antagonistic or merely mischievous. The actions of a spiritual entity might be inscrutable or prone to misinterpretation by inferior beings such as humans. Some accuse theological systems that emphasize our inability to grasp the divine will and plan as engaging in obscurantism. This accusation isn’t always false. Yet just like with the Prime Directive (on which see the podcast I link to below), the decision not to intervene in the way some other life form would like may be wise from the perspective of the one beseeched even though it seems cruel or uncaring from the perspective of the supplicant.

In related news, I will be giving a talk on Tuesday and apparently it is open to all, and so consider yourself invited:

Science fiction has moved since the late 20th century from being a fringe genre to having an unprecedented level of popularity in many cultures. The tools and methods of religious studies offer a distinctive angle on science fiction that goes far beyond the study of fictional alien religions. At the level of genre, it can be argued that sci-fi is akin to prophecy as evidenced in societies such as ancient Israel, using talk about the future as a vehicle to engaging in social commentary on the present and seeking to bring about societal change. Considered in conjunction with its exploration of imagined technologies, it becomes clear that sci-fi provides an important means for exploring ethical issues at the intersection of technology and values. Other elements in certain stories, ranging from encounters with beings identified as gods or angels, to time travel to the distant past or future, also intersect with religious studies, both as object of our study and provider of thought experiments useful to our field. This talk will explore some of the wide range of potential points of intersection where tools and insights from religious studies can be fruitfully applied to sci-fi, and conversely where sci-fi as a genre has something to contribute to religious studies. It will also offer an explanation of how an academic who began his career with the study of biblical literature ended up working in this seemingly unrelated area.

Also related, don’t miss my appearance on the Starbase Indy podcast (mentioned earlier in this post):

Paul Levinson writes about “Children of the Comet”:

I’ve been saying for years now, ever since cable and then streaming television emerged, that I much prefer continuing narratives throughout a season to standalone stories.  But I thought the first two standalone episodes of Strange New Worlds — the first with the same title as the series, the second aptly named “Children of the Comet”– worked great.  The first episode did violate the Prime Directive, though in all fairness, the don’t-interfere-directive was not yet named Prime, and only became Prime as a result of what Pike did in this episode.  The second, about (I guess) an AI-driven comet, and the belief of its protectors that the comet was a vehicle of a higher power, was one of the best religion in space stories I’ve ever seen, a really fine and intelligent job.  And this made me realize I prefer religion treated in Star Trek to the way it’s treated in, for example, Raised by Wolves. I guess that amounts to a preference for intellectual ingenuity over blood and gore.

Paul also recorded an audio episode of Light on Light about the first two episodes. He also arranged a roundtable discussion of Picard season two, in addition to blogging about the finale himself.

James Whitbrook reviewed the finale as well for Gizmodo, while Rob Bricken has written about why he is enjoying Strange New Worlds as someone who isn’t a Star Trek fan.

Fox News complained about the new Star Trek being too “woke.” The author begrudgingly admits that this is nothing new for Star Trek.

If you care to spread the word about my upcoming talk, here’s a poster you can use: 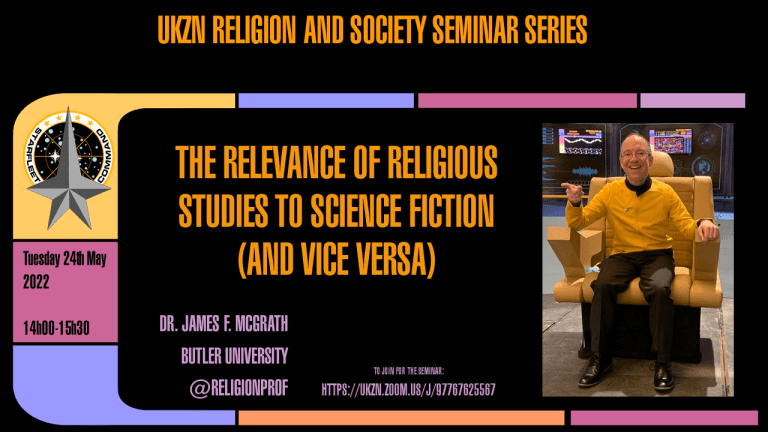