In the Footsteps of John the Baptist Part 3: Aenon near Salim

In many ways the most interesting stop on my trip to the Holy Land focused on the life of John the Baptist was in the Jordan River valley in between Yardenit in Galilee and Jerusalem in Judaea. I stayed at Kibbutz Tirat Zvi, and am glad I did. It made for something of an adventure since this is not a kibbutz that has developed itself as a destination for foreign tourists. “Reception” is only marked by a paper sign stuck on a door with no signposts anywhere else to direct one to it, and there is only someone in that office infrequently. The pool is only open irregularly and once again there is no schedule posted. The kibbutz store is also open only infrequently and at times that are not posted anywhere. The store also does not accept cash since the members of the kibbutz do not pay using currency. Although not a fully traditional kibbutz, it is one that has kept more of the original collective communal ethos of the original kibbutzim in Israel than most others. However, once one manages to get past the discomfort of not being able to do things the way one might when arriving at a hotel, it is simply an amazing place to be. There is a peacock on the premises, lots of wild parakeets, incredible fruit (pomegranates, lemons, oranges, and much more) growing everywhere. I also saw more than one mongoose (and I will return to what it is that attracts them there a little later). Roman mile markers were found on the site, indicating that a major Roman road ran through there. This is a very isolated location today and that is one of the risks of interpreting ancient stories based merely on visiting the same places today. What is above ground and visible may not indicate the significance a place had, or its lack of significance, in the distant past. Today there are cities where millennia ago there was nothing, and there is nothing where in the past there were major settlements and roads. These milestones mentioning the Roman Emperor Marcus Aurelius made this point clear, as well as confirming that this was anything but a backwater in John’s time. 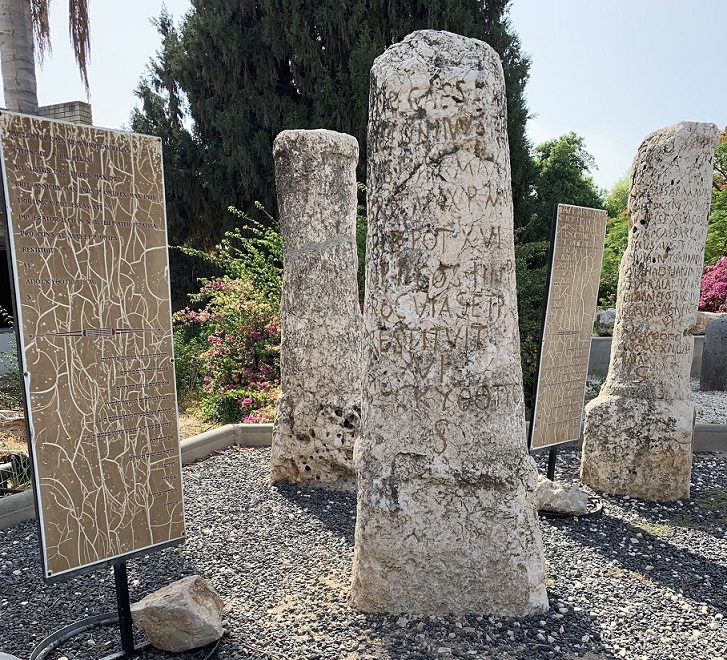 While staying there I had the privilege of visiting Tel Shalem with local archaeologist Achia Kohn-Tavor as my guide. I highly recommend him for anyone visiting this part of the world. Tel Shalem is almost certainly the site of the Salim mentioned in the Gospel of John. It is indicated on the Madaba map as a site of pilgrimage for ancient Christians (and the area is littered with roof tiles and bits of mosaic which indicate the presence of a church in antiquity). As you’ll see from the photo below, Tel Shalem looks like many tels or occupation mounds. This one is not developed as a tourist attraction, the location being very remote today. This obscures its ancient significance. Let me also include a photo of me and Achia on the road that runs along there: 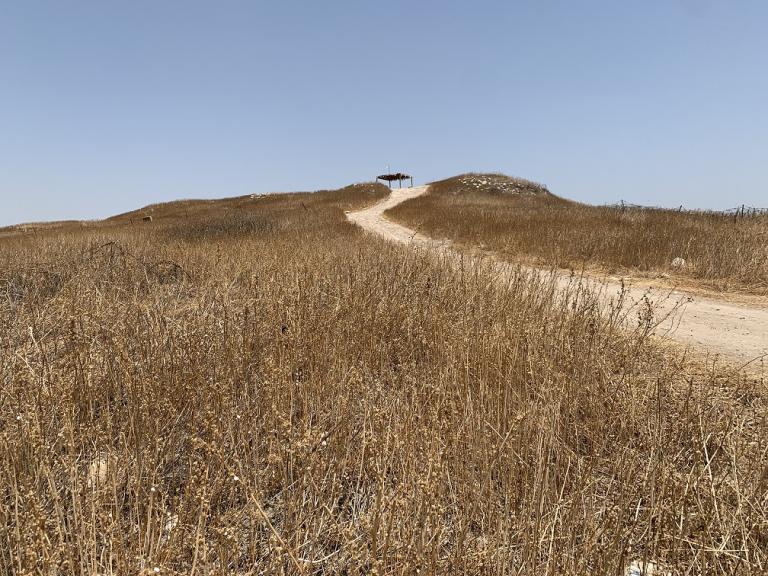 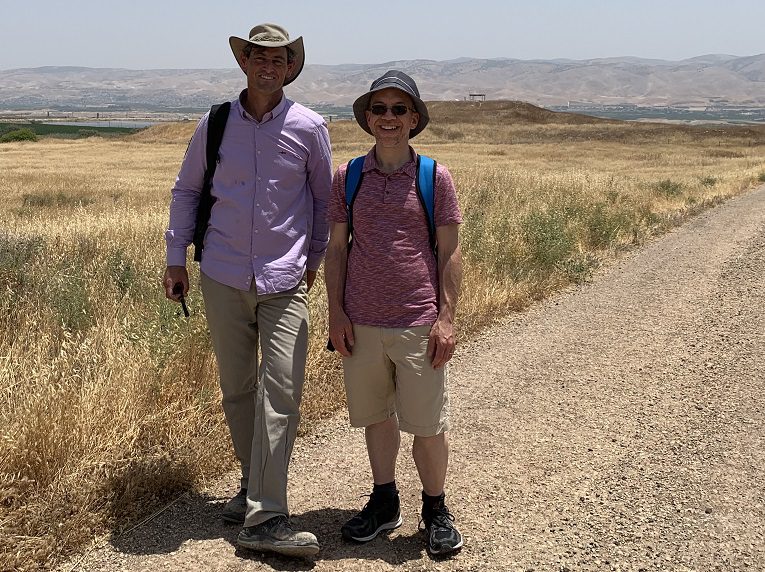 Near Tel Shalem there is a site where Roman troops were stationed and an incredible bust of Hadrian was unearthed there. It is now in the Israel Museum, and I saw it there when I visited. 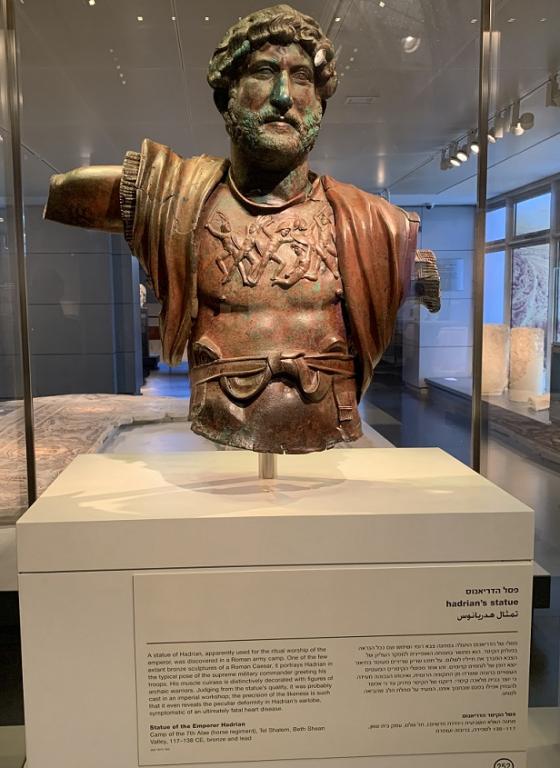 It was something that I saw on Kibbutz Tirat Zvi that was most significant for understanding the activity of John the Baptist here. Aenon near Salim most likely means “the springs near Salem.” Those springs feed a very large number of fish ponds created and maintained by the kibbutz today. 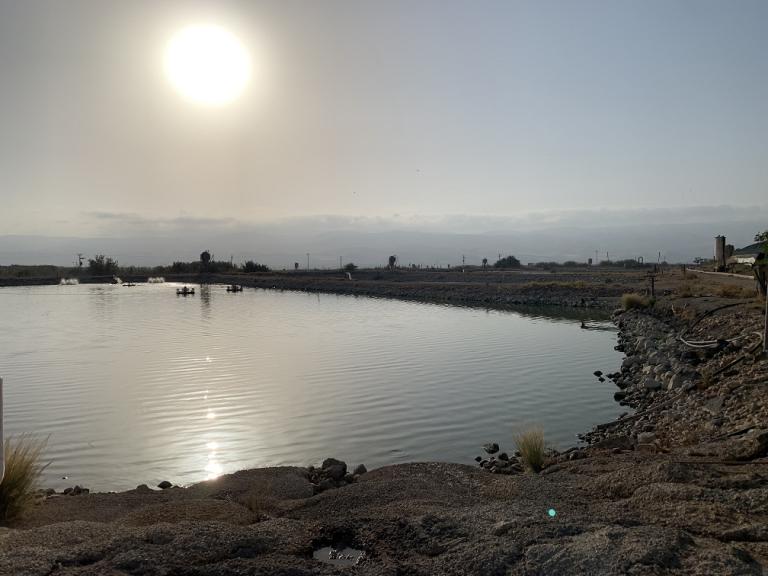 Danny Herman has a video about looking for springs in the area, not realizing when he set out that those water sources were being used for local farming today. The fish pools attract the mongooses that I saw while I was here. If you know the reference in John 3:23 you’ll understand why my visit made such an impression. “John also was baptizing at Aenon near Salim because water was abundant there, and people kept coming and were being baptized.” Hearing that there was “much water” doesn’t do justice to it. Seeing fish pools fed by the springs, stretching for almost a mile between the kibbutz and the Jordan River, and perpendicularly stretching for more than a mile between the kibbutz and Tel Shalem, made a more appropriate and more powerful impression.

Although later Melchizedek would come to be associated with Jerusalem, the city of Jerusalem was not called simply “Salem” at any point as far back as we can trace. This site is thus more likely to be the location that the author of Genesis had in mind. Thinking about this got me wondering whether the idea of a priest according to the order of Melchizedek (which is mentioned in Psalm 110:4 and applied to Jesus in Hebrews 7:17) might in fact go back to John the Baptist. The possibility of connections between the Letter to the Hebrews and John the Baptist is a whole area of research that requires more attention than it has received.

Achia also took me to see the Mosaic of Rehob (sometimes called the Tel Rahov inscription). It is the oldest bit of Talmudic text in existence. It records a decision about the status of Beit She’an (Scythopolis, the capital of the Decapolis) and more specifically the produce and goods from there. Beit She’an was another place I visited on this trip, and one of the things that visiting locations helps to bring home is that John and Jesus may not have focused their work on urban centers, but John being in the wilderness did not mean only the Judaean desert, nor did it mean places that were far from urban centers. The Mount of Temptation where Jesus is supposed to have gone after being baptized by John is right near Jericho. The site has no basis in history, to be sure, but it reflects ancient perception of where things occurred. John the Baptist was active not too far from Jericho and the same can be said with respect to Beit She’an. John may have had the impact that he did because he was active at major crossroads rather than focusing on urban centers. 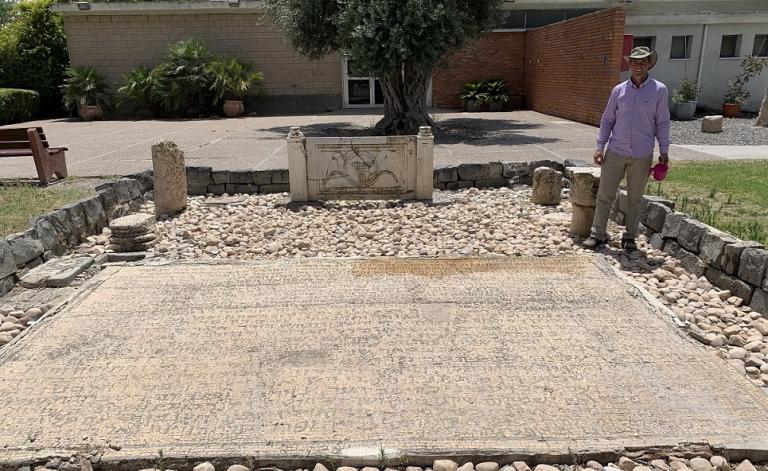 When I left Tirat Zvi I headed to Jerusalem, and that will be my next stop. I hope you enjoyed this glimpse of my recent trip. For those who may have missed it, the previous post in this series can be found here:

In the Footsteps of John the Baptist Part 2: Yardenit, Tiberias, and Bet Alfa 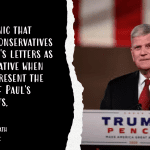 July 16, 2022
Who is the Founder of Progressive Christianity?
Next Post 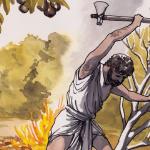 July 21, 2022 Experiential Learning: The Axe is at the Root of the Tree
Recent Comments
0 | Leave a Comment
Browse Our Archives
Related posts from Religion Prof: The Blog of James F. McGrath