Was Christian Communion celebrated during the moon landing 50 years ago?

Was Christian Communion celebrated during the moon landing 50 years ago? July 4, 2019 Richard Ostling

Do you know if it’s true Christian Communion was celebrated during the first moon landing?

Yes, though this was top-secret at the time. Something about such momentous events makes mere mortals reach for transcendent themes. For example, media coverage of last month’s 75th anniversary of the D-Day landing featured President Roosevelt’s famous radio address leading the nation and world in a prayer that God would bless the invading Allied soldiers in the “struggle to preserve our republic, our religion, and our civilization.”

Astronaut “Buzz” Aldrin performed the Christian sacrament on the moon in 1969, and revealed this in a 1970 article for the inspirational magazine Guideposts that was picked up by other media. Full text:  www.guideposts.org/faith/stories-of-faith/guideposts-classics-buzz-aldrin-on-communion-in-space. The Communion is mentioned in the official history posted online by  N.A.S.A.

At the time of the moon adventure, Aldrin was a lay elder of the Webster (Texas) Presbyterian Church and discussed ways to mark such an historic event with his pastor, Dean Woodruff. Aldrin raised the idea of Communion and Woodruff checked with Presbyterian headquarters, which said under those unusual circumstances it was proper for a solitary layman to serve himself elements that had been consecrated previously. (While Catholicism allows priests to celebrate Mass by themselves, Protestants only perform sacraments or ordinances in group worship.)

Two Sundays before liftoff, Aldrin received Communion in a private worship service. Woodruff gave him a second bit of the bread and a tiny silver chalice containing some of the wine, which he included with the personal items the astronauts were allowed to take into space.

After the Eagle landed on the moon, Aldrin asked mission control for brief radio silence. As Commander Neil Armstrong looked on, Aldrin read New Testament words of Jesus he had scrawled on a bit of paper: “I am the vine, you are the branches. Whoever remains in me, and I in him, will bear much fruit; for you can do nothing without me” (John 15:5). He then served himself the sacred bread and wine. Afterward, Armstrong walked on the moon, followed by Aldrin. (On July 20, do not forget the all-important third man, Michael Collins, who guided the module circling the moon that allowed the three to return alive to Earth.)

“It was interesting to think that the first liquid ever poured on the moon, and the first food eaten there, were the Christian Communion,” Aldrin reflected. “There are many of us in the N.A.S.A. program who do trust that what we are doing is part of God’s eternal plan for man.”

In a later memoir he had second thoughts about commemoration with an explicitly Christian ritual, since the landing was a signal event for “all mankind — be they Christians, Jews, Muslims, animists, agnostics, or atheists.” But at the time he could think of no better way to acknowledge the “enormity” of the event “than by giving thanks to God.”

In later years, Aldrin was to work through alcohol abuse and clinical depression, and told The New York Times that instead of attending church “my Sunday mornings are spent in a recovery meeting.” But his former church in Texas holds a “Lunar Communion” service each year to remember the moon landing, and will do so again July 21. The service includes a replica of Aldrin’s chalice, the original of which is preserved in a bank vault.

The Communion on the moon followed a similar event seven months earlier during the first manned flight to the moon. The Apollo 8  mission did not land on the surface, but the astronauts transmitted a breathtaking live telecast while orbiting the moon.

Countless viewers were deeply moved that Christmas Eve when William Anders, Frank Borman, and James Lovell took turns reading the familiar account of God’s creation of the universe and planet Earth from Genesis 1:1-10 in the august King James translation. Commander Borman then concluded, “Good night, good luck, a Merry Christmas, and God bless all of you — all of you on the good Earth,” — the last phrase referring back to Scripture’s verse 10. While orbiting the moon, Borman also apologized to his Episcopal congregation for being unable to serve as a lay reader for Christmas worship. In 2013, Lovell joined a Yuletide re-enactment of the lunar Bible reading at Chicago’s Museum of Science and Industry.

The Bible recitation offended atheistic activist Madalyn Murray O’Hair, who had won fame by filing one of two lawsuits by which the U.S. Supreme Court outlawed ceremonial Bible readings in U.S. public schools years before. After the Genesis incident, she filed the O’Hair v. Paine federal lawsuit, similar to her earlier school protest, accusing the National Aeronautics and Space Administration of “an establishment of religion” that violated the Constitution’s First Amendment.

Aldrin wanted his lunar Communion to be broadcast to the public like the Genesis words, but N.A.S.A. decided at the last minute to keep it a secret because of the ongoing O’Hair case. In the end, the U.S. Supreme Court declined to review a federal court ruling that dismissed O’Hair’s complaint. The ruling declared that O’Hair sought “freedom from religion” whereas astronauts had  personal “freedom of religion” under the Bill of Rights, which N.A.S.A. would have violated if it barred either the Genesis reading or the Communion on the moon. Both were astronauts’ personal initiatives without government mandates. Thus American religious freedom was extended into outer space.

On that astounding July 20, 1969, The Religion Guy joined multitudes who stayed up half the night watching the moon walk and TV analysis that followed, and wonders if others can confirm an odd memory. At one point CBS News anchor Walter Cronkite (1916-2009), an Episcopalian, interviewed star (so to speak) science fiction novelist Arthur Clarke (1917-2008), who was religiously agnostic. Eventually their chat went something like this:

Cronkite: “What do you think will be the long-term effect of the moon landing?” Clarke: “I believe it will lead to the greatest religious revival in the history of the human race.” Pause. Cronkite: “That’s very interesting. And now here’s a word from the Gulf Oil Corporation.” When the ad ended, Clarke had disappeared from view and Cronkite never mentioned his assertion.

Speaking of space flight, a recent memo by The Guy treats religious implications in whether conscious alien beings exist somewhere out there or we mortals are alone in the universe: www.getreligion.org/getreligion/2019/6/6/sky-high-journalism-a-new-look-at-old-old-story-of-whether-were-alone-in-the-universe 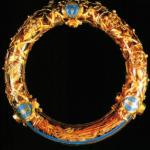 June 21, 2019
Is the Crown of Thorns rescued from the Notre Dame Cathedral fire authentic?
Next Post

July 22, 2019 #MeToo 3,000 years ago: Should King David or Bathsheba get the blame?
Recent Comments
0 | Leave a Comment
Browse Our Archives
get the latest from
Religion Q and A
Sign up for our newsletter
POPULAR AT PATHEOS Public Square
1

Whatever happened to U.S. "Mainline" Protestantism?
Religion Q & A
Related posts from Religion Q and A

Public Square
Why are U.S. voters so wary about electing...
Religion Q & A

Public Square
Where does the Catholic Church stand on the...
Religion Q & A

Public Square
"Would America Be Better Off Without Religion?"
Religion Q & A
TRENDING AT PATHEOS Public Square