A Host of Gods and Goddesses 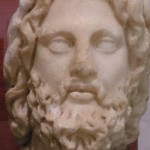 Religion is a way of life.  It is not about which tenets you may espouse, but about the  actions you perform. This concept takes on a special relevance in the Religio Romana where a cultor Deorum is defined by the rituals he or she performs, as well as  by the principles on which his or her actions are made. That is, there are Roman virtues by which we live our lives, and there are certain rituals we perform, not on a weekly basis but on a daily, and sometimes even an hourly, basis. We are not forgiven, after all, while we are conscious of always being under the eyes of our parental Gods and Goddesses.

In a certain sense, this can be thought of quite literally since one class of deities, the Lares, are  our deceased relatives, parents, and grand parents.  The Lares are invited to remain with us in our homes, ever watching our actions, helping us, and at times judging us in this life.   Familial piety is one of the Roman virtues, which is expressed in part by daily rituals for the Lares, as well as celebrating an annual Parentalia and a number of other festivals for the departed souls.  For example, in the month of May we just celebrated the Lemuria (May 9, 11, 13) with a series of rituals of exorcising our homes of unwanted Manes, inviting our Lares and Penates to remain, and leaving out offerings at the crossroads for the wandering Lemures.  A gentilis Romanus is one who attends funerary rites, tends to the grave site of relatives, performs rites for this Lares, and perhaps honors the genius of an ancient Roman he admires.  The gentiles maintain the customs of their clan (gens), not only for their deceased relatives, but also the customary rites of the family.  This can lead a gentilis, then, to a different category of deities, whether to the celestial Gods, above and below, or to the lesser gods of Nature. 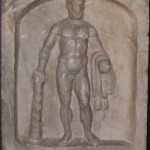 A cultor Deorum Romanorum, on the other hand, is a worshiper of the Gods; or more precisely, he is one who offers worship to particular Roman Gods in a particularly Roman manner of performing ritual.  Which particular Gods, you might ask?  There are well over one thousand names of Gods and Goddesses recorded in Roman inscriptions and texts. There are a multitude of Gods, and yet, according to Cicero,  there were only so few names by which They were invoked by the ancient sacerdotes.   For the most part though a cultor worships but a few deities who are relevant to her or his life.  Many cultores have reported being “called” into the service of a Goddess or by some God.  Others feel a certain affinity towards select Roman deities.  Minerva seems to be popular among modern practitioners of the Religio Romana.  Still others continue familial traditions of devotion to a specific God or Goddess.   Generally these are deities who are familiar from myth, and from Western art, architecture, and literature, as They permeate Western culture still in our music videos and in television advertisements.   They include Jupiter, Juno, and Minerva, Mars, Venus and the other Di Consentes. These are the Rome Gods most often confused with the Greek Olympians, or the Council of the Gods that is associated with the northern sky above, just as the Egyptian Council of the Gods and the Hebrew Council of the Gods in the Book of Psalms were said to be located in the northern portion of the sky.  The familiar deities would also include the Gods of the Underworld; that is, those deities, like Hades, Pluto, Proserpina and Dis Pater, who are associated with the southern portion of the sky, beneath the celestial equator.  There are patron deities of crafts and sciences, a host of deities of the sea, personified virtues, and Mother Nature Herself, the Great Mother of the Gods and humans, Magna Mater, Tellus.

Lesser known today are the more immediate lesser gods of the land and the goddesses of place.  These are the divine and the semidivine beings of Nature.  They are the spirits of the land,  sometimes named and sometimes not, the spirit of a forest, the Lady of the Lake, the Old Man of the Wood, the nymphs of springs and ponds, the river gods, the god of the mountain.  These are deities of which we become aware on an emotional level, as a presence we intuit, or sometimes see in a vision, or as a whisper on the wind.   These are ambiguous spirits.  Perhaps they are departed souls, Manes, who have attached themselves to a special place, like ghosts who haunt a house, only in a beneficial way.   More often, though, we feel a more potent entity inhabiting a place of Nature than may be just a ghost.   “Whether a god or a goddess,” the genus locii is the spirit of a defined place.  The place may be defined by a single ancient tree, and thus the genius locii in that case may be a semidivine Dryad, Maenad, or Helike, depending on the type of tree.  It may be bound by the bend of a river, or defined by a stand of trees, a naturally formed grotto, or the ecological niche of a small brook.  Whatever it may be thought to be, we honor the genius of a place just as we honor the genius (or juno) in every person. 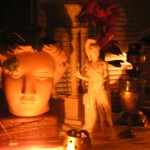 Beyond the gods of family and home, those in Nature on land and beneath the sea, the Gods and Goddesses of myth, Justice, Mind, Good Fortune, and the other abstract Gods and Goddesses,  still further beyond than the celestial deities, and the infernal ones as well,  there are the cosmic deities of philosophical speculation.  For even Jupiter, King among the Celestial Gods, has no power over the Fates or over Nemesis, who is sent by the higher Unknown Gods, the Involuti. We acknowledge the Involuti, but They are rarely the focus of our worship as in the mystery religions.

So, in a religion where one defines himself or herself in virtuous action and in devotional  practice, with so many Gods and Goddesses attending, how does the Religio Romana impact on the daily life of a gentilis Romanus, cultor Deorum?