Traveling through Europe this past summer offered many sights and experiences, along with some adventures. My journey began in Frankfurt, Germany, from where I soon departed for Budapest, Hungary. There I met with my fellow Pontifex Corneilus Lentulus, Popillia, and Livia Plauta. The four of us had met earlier at Conventus VI held in 2008 at Bucharest and Baile Herculane, Romania. Since that time I have attended Conventus VII in Nashville, Tennessee, in 2009, while Pontifex Lentulus had gone on to Poltava, Ukraine, in 2010 to consecrate sacerdotes for us and to perform three marriages by confarreatio. At those ceremonies in 2010 under the authority of the Collegium Pontificum Pontifex Lentulus had stood in for me as Pontifex Maximus. In the last days of July, therefore, Livia and I would travel by train from Budapest to Kiev, and then travel further by car to attend Conventus IX held this year in Poltava, Ukraine. As part of the Conventus we celebrated four wedding anniversaries for 4 August, the three confarreationes performed by Pontifex Lentulus for Marcus Corvus and Flavia, Appius Furius and Natalia, and for Brutus and Vera, and then for my own marriage from many years earlier.

One concern I had before taking this trip was over the Temple of Jupiter Perunus. As I reported earlier, its construction site had been vandalized by overzealous Christians. The actual damage proved minimal, even superficial, and served only to strengthen the resolve to continue building the entire complex. Donations for the construction have come from around the world in response, and the local community has doubled their efforts and devoted their labor to the project. A large podium and steps sat over the foundation when I arrived. The walls of the cella have since been raised behind the place where columns shall one day mark out the vestibule.  A deep trench has also been dug next to the temple. As with the Capitolium of Ostia an artificial Capitoline Hill has been effectively created between the high podium and the trench above the flat steppes of eastern Ukraine. When completed this first temple will be the size of a moderate house. This is desirable because, unlike in other religions, a Roman temple is not a place of worship but is instead a house offered to a God as a temporary residence for whenever He visits the community. Inviting Gods and Goddesses to a ritual lends Their beneficial presence to a celebration. How much more may a community benefit when a Goddess or a God resides among a community and we may visit Them at Their house?

The entire project in Poltava is truly impressive and ambitious in scope. Our thanks goes to Viktor for his designs and drawings of the project. This first Temple of Jupiter Perunus is to be joined by a Capitolium. This additional temple building will reproduce the dimensions of the original Capitolium of Rome. The first Capitolium was made of wood in what is called an Etruscan style that is relatively wider and shorter than Rome’s marble temples would develop into later. This wooden temple stood atop a stone platform, or podium, whose dimensions remained the same even when replaced by temples of greater height. The stylobate, or upper most portion of the podium, was 13 to 16 feet high alone. Over all, the podium stood between 32 and 45 feet high on top of the highest point in Rome. The size of the temple sitting on this high platform was approximately 185 feet wide by 198 feet long. The main cella for Jupiter was approximately 100 square feet, with the two side rooms for Minerva and Juno being slightly smaller. Duplicating those dimensions shall indeed become an impressive accomplishment in itself.  However Roman temples have served as models for buildings in many places, including in Poltava, Ukraine, where the National Bank building, with its three doors, replicates the three celle of the Capitolium in Rome. These temples, the Poltava Capitolium and the Temple of Jupiter Perunus, are only part of the entire complex that has been planned. Both temples will eventually sit at the northern end of a Forum which will become the center of the town that the community is building.

The trench that was dug beside the Temple of Jupiter Perunus is to be continued further to the front of the temple complex. A paved passageway shall then lead to these temples with deep gorges on either side of it. More effective than an enclosure wall, this bridge to the holy sanctuary evokes the mysteries that lead us into the realm of the Gods.

As part of this temple complex twelve additional altars will surround the main temple.  Each altar shall be dedicated to a different God or Goddess.  Taking on a special importance of its own is the choice of which deities to invite into the Sarmatia community of Poltava.  In anticipation of the Capitolium that has been vowed, three of the twelve altars ought to be dedicated to Jupiter, Juno, and Minerva, the Capitolium Triune. Others that the community has proposed are Concordia to evoke harmony into their lives and to promote concord in their Roman community. Fortune, Honor and Virtue, Mens (Mindfulness), and Fides (Faithfulness) are other divine attributes that they have elected to invoke for their growing town. Considered, too, are then Saturn, Hercules, Quirinus, and Castor, who embody these noble qualities. Altars for Venus and Mars and Vulcan, while having been considered as well, ought instead to be placed outside the pomerium, as the perimeter of a Roman town is called.

Conventus IX included a tour around the city of Poltava that brought us to the 18th century house of Ukrainian poet Kotlyarevsky, and another quick tour of the battlefield where Peter the Great of Russia defeated Charles the XII of Sweden in 1709.  There were discussions held over dinner on organizing RPR further, and we attended a meeting of the Sarmatia council. Conventus IX ran in conjunction with the annual festival held for Jupiter Optimus Maximus Perunus. The highlight of both came with the sacrifice of two bulls and the sacramental feast that followed. A pyre, roughly 3 x 3 meters, was first built up to a height of a man. Professionals were hired to properly slaughter and clean the animals before the one was butchered. Brutus offered up a whole bull to fulfill a private vow he had previously made on behalf of his son. An oxen was likewise publicly offered to Jupiter on behalf of the Roman community in Poltava, but in a different manner. The oxen’s bones, organs and fat were bundled up into its hide before they were placed on the pyre for Jupiter. Its bucranium was set on an altar.  Later it will  be buried beneath the Temple of Jupiter.  The meat of the oxen was preserved for the local community, some roasted that night was served for the sacramental feast. The festival of Jupiter Perunus was conducted in accordance with local customs.  Those of us sacerdotes who were visiting from foreign countries did not actually participate in either of these sacrificial ceremonies.  RPR sacerdotes who serve as augurs instead follow the Numa tradition by which blood sacrifices are strictly forbidden in order to preserve ritual purity for the auspices that they conduct.  Customary dishes of garden vegetables and beef were prepared by Appia Flavia for the feast that carried us into the evening.  Portions were prepared and offered to Jupiter Perunus as well, since it is always customary to invite the Gods to attend our festivals and share in our meals. 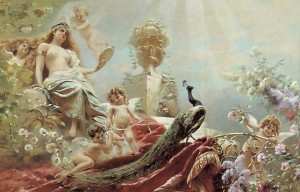 Wonderful to report, too, a portent appeared after the Conventus which pertains to these altars. During the Conventus Fabius Major had private discussions with Marcus Corvus and myself on his desire that one of the twelve altars is dedicated for Palatua.  She is the Goddess of the Palatine where Romulus first founded Rome.  Palatua has been especially close to the Consul ever since he first visited Rome.  Gaia Lucia, wife of Brutus, was named as Priestess of Palatua in Poltava. When arrangements had all been made to begin on this effort, a remarkable sight was reported. Marcus Corvus, and Augur, saw the image of a woman glowing with light, ascend the steps of the podium and enter the incomplete Temple of Jupiter Perunus as though She was inspecting the construction site. Then was Her name whispered in his ear and Palatua assented to visiting the site again in the future. She shall thus be given a place of honor joining with the Capitoline Triune.

January 12, 2013 Annum Nouum MMDCCLXVI bonum faustum felicem!
Recent Comments
0 | Leave a Comment
Browse Our Archives
get the latest from
Pagan
Sign up for our newsletter
POPULAR AT PATHEOS Pagan
1

Why Do So Many of Us...
John Beckett
Related posts from Religio et Pietas