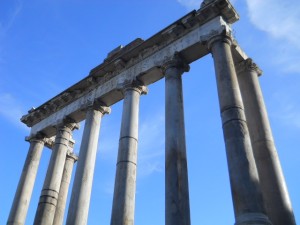 This coming Sunday (21 April) the people of Rome shall celebrate the 2766 anniversary of the Founding of their city. Parades shall wind through the City with costumed companies of legionaries representing the glory of ancient Rome in just one part of the city’s celebration.  Modern cultores Deorum who are spread over the many parts of Earth find PARILIA a unifying celebration. It lends them a sense of identity in a community stretching outward from Rome in time and place, from the very ancient souls of our community to our newest worshipers of the Roman Gods, from Rome east to Japan, New Zealand and Australia, and west into Argentina, Brazil and Mexico, as far as Alaska and Hawaii. The Rome of this  PARILIA celebrates the ideal of the Roman Republic, tolerating all religions, all races and all ethnic groups in the Stoic vision of a Brotherhood of Mankind. The Rule of Law is the heritage passed on by Rome to Western civilization, based on the simple principle that all citizens are equal under the law. The ideal of the Roman Republic has ever since influenced Western law, education, and sciences.  The ideal of Republican Rome was at the Founding of the American Republic and has since been at the heart of other republics around the globe. Both the living city of Rome today and the idealized Rome are traced back to this day in April when Romulus and Remus first founded the Eternal City on the Palatine Hill.

PARILIA is a religious holiday whose rites have been handed down to us from ancient times. Originally PARILIA concerned a ritual purification of sheep and shepherds. The sheep were led through streams and compelled to leap over smoking embers.  Their pens were likewise cleansed and fumigated to remove pests. It was a normal springtime chore for shepherds to perform, and like many labors undertaken in those days, it was coupled with rituals of purification to ensure the fertility of the flocks. The shepherds purified themselves in the same way for the festival of Pales, who is the God of Shepherds. The Good Shepherd Pales represents a body of myth at Rome that traces across the Mediterranean region from Babylon to Cadiz during the Bronze Age. He relates, that is, to Tammuz, Adonis, Ba’al, and Carthaginian Pales from a pre-Roman past. Like some of these foreign deities, purification of shepherds in the rites of Pales ensured their virility as much as it provided for the rams of their flocks.

Inside the City of Rome, PARILIA was likewise held with purification rites as a festival of the Pales. But unlike her rural cousin, this urban Pales is identified as the protective Goddess of the Palatine Hill. The urban ritual involved the placement of three parallel lines of smoldering coals of bean stalks on which the Vestal Virgins had placed the ashes and dried blood from previous sacrifices. In ancient times the dried blood came from the sacrifice of the October Horse to Mars, and the ashes were those of calves sacrificed for Ceres and Tellus, Goddess of the Earth, at Fordicidia (15 April). The bean stalks may refer to Carna, a minor goddess who nurtures healthy organs and aids children in growing strong. Today a cultor Romanus might set his garden refuse on hot coals, not only bean stalks, returning them to Mother Earth, and dried blood, purchased at a garden store to ward off some pests, might be added as a substitution to emulate ancient practice.  More often a modern cultor would add healing herbs as a fumigate to his or her coals.  Participants then, as now, pass through the smoke by leaping over each pile in turn. They are then sprinkled with pure water by a sacerdos from a bough of laurel bearing seven leaves.

Where this urban rite took place was once as important as what was done in ritual.  It was on the Palatine Hill that Romulus first performed the Foundation rites of Rome. These rites consist of three parts – constructing the mundus (an underground altar), ploughing the circuitous route of the city boundary with a team of ox and cow, and then setting out stone markers of the pomerium, for the sacred district of the City. As Rome grew, the pomerium expanded, with special rites commemorating the first Founding.   The Romans used the same ritual to found new colonies and new temples. It was same ritual widely used throughout Italy, however, long before Rome. While the Romans attributed it to the Etruscans, as they did any practice that predated their grandfather, depictions of the rite can be seen in petraglyphs, dating as far back as the Bronze Age, that are from the Val Camonica in northern Italy. There a naked man ploughs as a women prays her ululations at the side of the field. The woman is possibly one of the vates, who, like sibyls later, represent the earliest stage of Italian religion.

What brings these many strands together at PARILIA is Numa Pompilius. First, Numa was said to have been born on PARILIA, and thus for some modern sacerdotes this festival is also seen as the anniversary of the Founding of the Religio Romana. Numa Pompilius, as the Law Giver, serves somewhat the same role in the Religio Romana as does Moses in Jewish tradition and Mohammed for Islam.  Secondly, the rituals of PARILIA are attributed to Numa Pompilius. According to the Roman poet Ovid, Numa first instituted these rites as part of the City of Rome’s public rites. It is quite interesting how he is said to have been taught these rites, for they appeared to him in a vision during an incubation rite. Heading deep into a sacred grove in the forest, Numa made sacrifices of sheep to Faunus and Sleep. He then laid upon their fleeces and received an oracle. Uncertain of its meaning about “one heifer must sacrifice two lives,” Numa next consulted the nymph Egeria in the sacred grove of Carmena, the Goddess of prophecy, song, and healing charms who most personifies the vates. The Fordicidia sacrifice of a calf-bearing cow is paralleled by the Vedic astapadi sacrifice of the “eight-footed (cow).” And Numa, in forming the state religion for Rome with organized priesthoods of men, represents the transition from the vates in much the same way as Brahmans would replace women as religious leaders in India. In this way, too, PARILIA represents a transformation of the ecstatic tradition of Bronze Age Italy  into the formalized religion of Iron Age Rome. Numa Pompilius, coming as he did on that cusp of time and place, embodies both the formal and the ecstatic sides of the modern Religio Romana, of our ancestors from the most ancient past on to the future of our rekindled faith.

March 1, 2013
MATRONALIA: Festival of Wives and Mothers
Next Post

April 27, 2013 The Numa Tradition for Today
Recent Comments
0 | Leave a Comment
""My 'battle' is often with atheists - pagan atheists - who revere nature and argue ..."
Thisica Beliefs: That the Gods of Ancient ..."
"the bottom line is reality, one may have ones own moral consience of how important ..."
jeff Discussing Sacrifice in the Bhagavad-Gita
""In some rituals the numen of a Goddess may instill a sensation of serene security."Do ..."
Guest An Ecstatic and Formal Side to ..."
"Thank you for sharing with us, Piscinus."
Crystal Clary Annis Morning Prayers
Browse Our Archives
get the latest from
Pagan
Sign up for our newsletter
POPULAR AT PATHEOS Pagan
1

Litha: the heat is on – go play,...
Litha is here and it is the longest day of the year....
view all Pagan blogs
What Are Your Thoughts?leave a comment
Copyright 2008-2021, Patheos. All rights reserved.