“The tension in the car that horrible day was as thick as the gray fog outside. It felt as dark as a night with no moon. No one would speak of the purpose of this drive, but, oh, I wanted to. I wanted to shout that she wasn’t a bad child. That she was just acting like the teenager she was.

Who cared if she’d had sex? Who cared if it was with our bishop’s son? Why couldn’t his parents send him away? Why was Grandma’s “good standing” more important than her love for my sister? Why wasn’t our mom fighting for her daughter? (Due to insurance issues, my mom had signed custody to my grandmother for what was supposed to be a year. But Grandma wouldn’t sign it back. My grandma then used it to hurt and control my mom.)

I kept thinking, Yell, Mama, yell! Fight, please fight! Custody is just a piece of paper. Grandma has no right. God made you her Mama!” – Michelle DeBoard

Michelle is one of 22 women who have written about their personal journeys away from religion. In her case, she lost her best friend when her sister was forced to move away. The relationship was never the same again. She left behind her religion, Mormonism, the day her sister boarded the airplane. 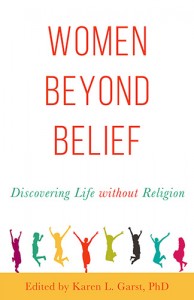 Karen L. Garst has compiled these essays into a book entitled Women Beyond Belief: Discovering Life without Religion, which can be pre-ordered here on Amazon. Dr. Garst became incensed when the U. S. Supreme Court issued its decision in Burwell v. Hobby Lobby in 2014. This decision said that because of its religious views, Hobby Lobby, a craft store, would not be obligated to follow the dictates of the Affordable Care Act and provide certain forms of birth control to its employees. “Will we never end the fight for women’s reproductive rights?” Garst asked. Once again, religion has influenced the laws of our land. Politicians cite their religion in support of restrictions on abortion, banning funding for Planned Parenthood, and a host of other issues that are against women’s best interests.

Dr. Garst and others want to add a focus on women and the role this mythology has played in the culture of many countries to denigrate and subordinate women. She states that “Religion is the last cultural barrier to gender equality,” and I think she is right. Lately more and more women atheists are speaking out. And as we all know, if women leave the churches, they will collapse.

Karen has received support with reviews by Richard Dawkins, Valerie Tarico, Peter Boghossian, Sikivu Hutchinson and many other atheist authors. I encourage you to check out Dr. Garst’s blog at www.faithlessfeminist.com and to pre-order this excellent book. 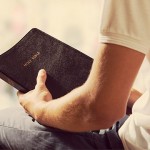 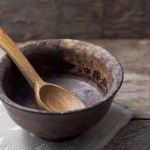 October 2, 2016 Doing Without: How One Spiritual Discipline Almost Ruined My Life
Recent Comments
0 | Leave a Comment
Browse Our Archives
get the latest from
Removing the Fig Leaf
Sign up for our newsletter
POPULAR AT PATHEOS Nonreligious
1