Doing Without: How One Spiritual Discipline Almost Ruined My Life

Doing Without: How One Spiritual Discipline Almost Ruined My Life October 2, 2016 Alexis Record

“Put a knife to your throat if you are given to appetite.” Proverbs 23:2

I grew up in a religious community that some have called a cult. One of our more interesting doctrines involved sanctions against eating certain kinds of foods. We were hardly the first faith tradition to make rules about food, but ours were pretty restrictive. We were told God required us to be like Daniel who refused to eat the king’s food. In our case we had a very small list of approved foods—like a kind of extreme kosher—that was difficult, but certainly not impossible, to follow. We were constantly reminded that in order to have a happy, fulfilling life, most foods had to be avoided and calories limited. 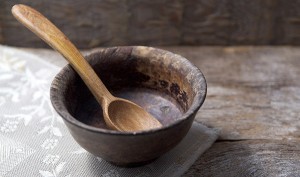 I now understand food cravings to be a very natural and healthy response to hunger, but in my youth they were considered temptations from Satan. Stomach aches were the natural consequence of disobedience to God’s dietary laws. And if we persisted in sinning with food we could look forward to eternal torment in Hell.

Obviously stomach aches occur fairly frequently when foreign foods are introduced into an extremely restricted diet. But we thought aches and pains from breaking the rules somehow validated the rules; we never imagined the rules themselves were causing the problems.

Sometimes guilt about wanting food would be enough to cause stomach issues. I would have dreams about eating chips with salsa or drinking juice, and wake up with a stomach ache caused by guilt. I would habitually bite my nails and wonder if it was breaking the dietary rules. I once prayed that God would take away my mouth. I felt like a very base creature at times, tied to my appetite.

It was odd that those with broader diets never complained of the constant stomach issues we were told they must suffer from. I assumed they were secretly miserable and wished they could be more like us. Didn’t they want mastery over their appetites? I tried my best to show them that our way was best. I truly believed it.

Now, dietary restrictions were mostly regulated to the young. Mature Christians could prove themselves and gain access to food that others could not touch. When we were old enough to get permission from the leadership, we could participate in a Coming of Age feast where we were allowed to eat once forbidden foods under the watchful eye of the church elders. Things like creams, starches, spices, and sauces were added to our diets. (Foods like chocolate or butter, however, would remain permanently forbidden.) This humble “feast” was always talked about in a very positive way. It was our reward for keeping our diet faithfully through years of hunger. It was God’s blessing to us. We looked forward to it.

If stomach aches were considered the result of sin, why did our leaders never consider that we might feel horrible after our feast experience?

My feast happened a bit later than some, at the ripe old age of twenty-two. I had kept faithful to my godly diet my entire life, with no violations. It was well past time to get some real food, and I cannot describe my excitement. Unfortunately I never got to enjoy a single bite that day. Upon loading up my fork with the first mouthful, my throat immediately closed and caused me unimaginable pain. It caught me completely off guard, and I hurried from the feast straight to the hospital.

My first thought was that the feast had been an elaborate test that I had failed. Of course food was bad! Hadn’t my church leaders taught me this from birth? I was wrong for wanted this food more than I wanted God. If I thought it was a test before, I had no idea the challenge awaiting me. My church leaders informed me that I had to continue to obediently eat the feast for God. I had come of age now. There was no turning back. It was my holy duty.

It took four long weeks of daily pain before I could swallow the tiniest bite. Those weeks were the longest of my life. Then a year of painful, torturous eating followed. I would get anxious before mealtimes. I was angry and miserable. I hated feasts. I hated food. I hated God’s plan and I hated myself.

After a while, though, it struck me how dishonest it all was. One day I was listening to a spiritual leader telling a group of young people how keeping their diets would be rewarded one day with the best feast of their lives. I wanted to stand up and shout that it was a lie! How many sermons had I heard that taught obedience in food would be hugely rewarded at the feast? Yet during these days all I did was cry in pain for hours after trying to put anything anywhere close to my mouth. God lied to me.

I wasn’t alone. Friends and loved ones, mentors and even church elders, confided in me that my painful experience was not abnormal. Many had experienced similar painful consequences. Although not everyone had their throats close in stabbing pains, enough people in our community had experienced it that it was a known problem. One friend in particular, who had a similar painful experience, wondered if being so good about avoiding food for so many years had caused our bodies to now reject it entirely. She assured me that eventually my body would adjust. She went on to defend God’s food wisdom, and I nodded in agreement, but was no longer quite as sure.

Finally I went to a medical specialist for my food issues, and I’ll never forget what she told me. She said she wished I had rebelled and eaten forbidden food before my feast so I wouldn’t have the problems I have now. I found her words blasphemous, but I knew she was right.

The above story is 100% true, but, as you may have guessed, it requires the following substitutions.

Instead of food, it was sex.

Instead of a cult, it was mainline Christianity.

Instead of a feast, it was my wedding night.

Instead of ending up in the hospital… no, that happened. I went straight from my honeymoon to a crowded ER. Why? Because my vagina was broken.

My issue was a condition called vaginismus, which happens when the walls of the vagina (the pubococcygeus muscles) close up painfully to avoid any penetration. While vaginismus can have many causes (such as rape or anxiety disorders), it is common among girls from religious environments with “strict conservative” sexual rules. Let that sink in: It’s caused by trauma. My strict conservative religious sexual shaming was a trauma.

Any attempts to penetrate the vagina felt like sharp stabs from a vicious knife. Not only could I not physically have sex, I was also unable to use tampons or get a pap smear. It was as if all that purity teaching sunk in, and my body obediently shut down at the thought of anything going anywhere near the “sin zone.”

I did treatments for this condition that felt like borderline sins for four weeks until I was able to finally have (painful) intercourse. I didn’t know if I was technically married without consummating the marriage during that time, so when someone wished me a “Happy one-month anniversary,” I broke down in bitter tears.

As I have said before, it has taken a complete rejection of my biblical worldview to have a healthy sex life. I didn’t reject Christianity in order to have better sex (I rejected it for violating reason), but it was a surprising and welcomed added benefit.

Through the month of October, Patheos will run a series on “The Spirituality of Sex.” Many different faiths will share guidelines for sexuality that they received through visions, holy texts, or other problematic god-knowledge which humans are always happy to claim their particular group defends. While I know sex can be a spiritual experience for many people, I hope we all remain wary of those who use it to control others.

There is nothing sacred about sexual taboos that harm people, even if it’s only a small percentage of people. We are sexual creatures. Life itself is sexually transmitted. While forced sex is a very bad thing, just like poisoned food is, consensual sex is absolutely normal and natural for the human animal (just like good food is). Telling someone their healthy desires are sinful is abusive. Period.

I dearly wish religion had stayed out of my bedroom. 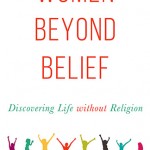 September 15, 2016
Women Beyond Belief: Discovering Life without Religion
Next Post 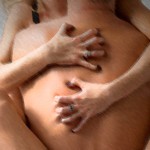 October 4, 2016 Can Godless Sex Be a "Spiritual" Experience?
Recent Comments
0 | Leave a Comment
Browse Our Archives
get the latest from
Removing the Fig Leaf
Sign up for our newsletter
POPULAR AT PATHEOS Nonreligious
1