The U.S. Department of Health and Human Services refused on Jan. 20 to broaden the exception to 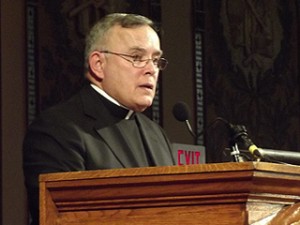 its mandate that nearly all Catholic employers must cover contraception, abortifacients, and sterilization in their health-care plans.

An “accommodation” offered Friday by the White House did not solve the problem. Instead, it triggered withering criticism from legal scholars such as Notre Dame’s Carter Snead, Harvard’s Mary Ann Glendon, Princeton’s Robert George, and Catholic University of America president John Garvey, along with non-Catholic scholars including Yuval Levin, the religious liberty law firm the Becket Fund, and numerous Catholic and other organizations.

Many Catholics are confused and angry. They should be.

Quite a few Catholics supported President Obama in the last election, so the ironies here are bitter. Many feel betrayed. They’re baffled that the Obama administration would seek to coerce Catholic employers, private and corporate, to violate their religious convictions.

But it’s clear that such actions are developing into a pattern. Whether it was the administration’s early shift toward the anemic language of “freedom of worship” instead of the more historically grounded and robust concept of “freedom of religion” in key diplomatic discussions; or its troubling effort to regulate religious ministers recently rejected 9-0 by the Supreme Court in the Hosanna Tabor case; or the revocation of the U.S. bishops’ conference human-trafficking grant for refusing to refer rape victims to abortion clinics, it seems obvious that this administration is – to put it generously – tone deaf to people of faith.

February 11, 2012
Cardinal George of Chicago: "We cannot — we will not — comply with this unjust law."
Next Post

February 12, 2012 Thomas Aquinas
Browse Our Archives
get the latest updates from
Return to Rome
and the Patheos
Catholic
Channel
POPULAR AT PATHEOS Catholic
1

The Oxford School Shooting and its...
Steel Magnificat
Related posts from Return to Rome