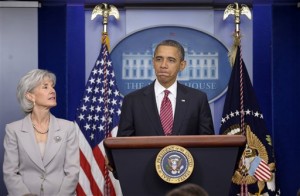 George, Notre Dame law professor Carter Sneed, and Yuval Levin of the Ethics & Public Policy Center. Right now the letter is being circulated and in the process of acquiring many more signatories. I am proud to say that I signed it only moments ago when it was sent to me via email. It is a strong rebuttal to the HHS regulation “compromise” offered earlier today by President Obama.  The letter reads:

Today the Obama administration has offered what it has styled as an “accommodation” for religious institutions in the dispute over the HHS mandate for coverage (without cost sharing) of abortion-inducing drugs, sterilization, and contraception. The administration will now require that all insurance plans cover (“cost free”) these same products and services.  Once a religiously-affiliated (or believing individual) employer purchases insurance (as it must, by law), the insurance company will then contact the insured employees to advise them that the terms of the policy include coverage for these objectionable things.

This so-called “accommodation” changes nothing of moral substance and fails to remove the assault on religious liberty and the rights of conscience which gave rise to the controversy.  It is certainly no compromise.  The reason for the original bipartisan uproar was the administration’s insistence that religious employers, be they institutions or individuals, provide insurance that covered services they regard as gravely immoral and unjust.  Under the new rule, the government still coerces religious institutions and individuals to purchase insurance policies that include the very same services.

It is no answer to respond that the religious employers are not “paying” for this aspect of the insurance coverage.  For one thing, it is unrealistic to suggest that insurance companies will not pass the costs of these additional services on to the purchasers.  More importantly, abortion-drugs, sterilizations, and contraceptives are a necessary feature of the policy purchased by the religious institution or believing individual.  They will only be made available to those who are insured under such policy, by virtue of the terms of the policy.

It is morally obtuse for the administration to suggest (as it does) that this is a meaningful accommodation of religious liberty because the insurance company will be the one to inform the employee that she is entitled to the embryo-destroying “five day after pill” pursuant to the insurance contract purchased by the religious employer.  It does not matter who explains the terms of the policy purchased by the religiously affiliated or observant employer.  What matters is what services the policy covers.

The simple fact is that the Obama administration is compelling religious people and institutions who are employers to purchase a health insurance contract that provides abortion-inducing drugs, contraception, and sterilization.  This is a grave violation of religious freedom and cannot stand.  It is an insult to the intelligence of Catholics, Protestants, Eastern Orthodox Christians, Jews, Muslims, and other people of faith and conscience to imagine that they will accept as assault on their religious liberty if only it is covered up by a cheap accounting trick.

Finally, it bears noting that by sustaining the original narrow exemptions for churches, auxiliaries, and religious orders, the administration has effectively admitted that the new policy (like the old one) amounts to a grave infringement on religious liberty.  The administration still fails to understand that institutions that employ and serve others of different or no faith are still engaged in a religious mission and, as such, enjoy the protections of the First Amendment.

February 10, 2012
Best explanation of the HHS "compromise": it's a shell game
Next Post 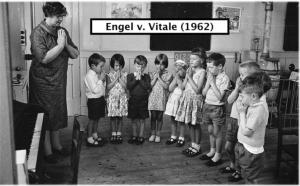 Catholic
Is it Time to Rethink the School Prayer...
Return to Rome