Justice Kagan, You Gotta Serve Somebody

That’s the title of my latest entry over at The Catholic Thing. Here’s how it begins:

Reading the transcript of Tuesday’s oral arguments before the Supreme Court in the Hobby Lobby and Conestoga cases, I came across this exchange between Justice Elena Kagan and the attorney for Hobby Lobby, Paul Clement:

MR. CLEMENT: Well, just to put this in concrete terms, for Hobby Lobby, for example, the choice is between paying a 500 – a $475 million per year penalty and paying a $26 million per year coverage.
JUSTICE KAGAN: No, I don’t think that that’s the same thing, Mr. Clement. There’s one penalty that is if the employer continues to provide health insurance without this part of the coverage, but Hobby Lobby could choose not to provide health insurance at all. And in that case Hobby Lobby would pay $2,000 per employee, which is less than Hobby Lobby probably pays to provide insurance to its employees. So there is a choice here. It’s not even a penalty by – in the language of the statute. It’s a payment or a tax. There’s a choice. And so the question is, why is there a substantial burden at all?
MR. CLEMENT: Well, just to be clear, we were talking about the same thing. So the option, the choice, is between paying a $475 million a year penalty and a $26 million a year penalty. That’s what Hobby Lobby faces. So $2,000 per person.
JUSTICE KAGAN: No, between paying $2,000 per employee per year if Hobby Lobby does not provide.
MR. CLEMENT: That’s $26 million.
JUSTICE KAGAN: You know, Hobby Lobby is paying something right now for the – for the coverage. It’s less than what Hobby Lobby is paying for the coverage. There are employers all over the United States that are doing this voluntarily because they think that it’s less.

So, according to Justice Kagan, the way that the Green family, the owners of Hobby Lobby, can avoid this “substantial burden” is to simply not offer to their employees health insurance of any kind.  Consequently, they not only do not have to provide to their employees pharmaceuticals that are used to end nascent human life (which is what the Greens object to in the HHS mandate),  they are financially in a better position than they were before. How can one not like this deal? Thus, reasons Kagan, if the Greens have the right under the Affordable Care Act to choose to relieve themselves of this substantial burden and do not exercise that right, it is the Greens, and not the government, that is placing a substantial burden on the Greens.

January 22, 2014
My NRO Interview - "Abortion and Human Equality: How to return the debate to the essential questions 41 years after Roe."
Next Post

Unmasked: Pride, Malice, And The Spirit...
A Little Bit of Nothing
Related posts from Return to Rome 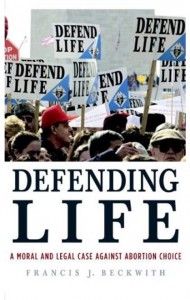 Catholic
What Good Am I?: Bob Dylan on Today's...
Return to Rome
TRENDING AT PATHEOS Catholic