Gotta Serve Somebody? Religious Liberty, Freedom of Conscience, and Religion as Comprehensive Doctrine

That’s the title of an article I recently published in the journal, Studies in Christian Ethics 33.2 (2020).  It is a revised version of a paper I delivered at a conference at Oxford University in May 2018.  Here is the abstract:

This article critically assesses an account of religious liberty often 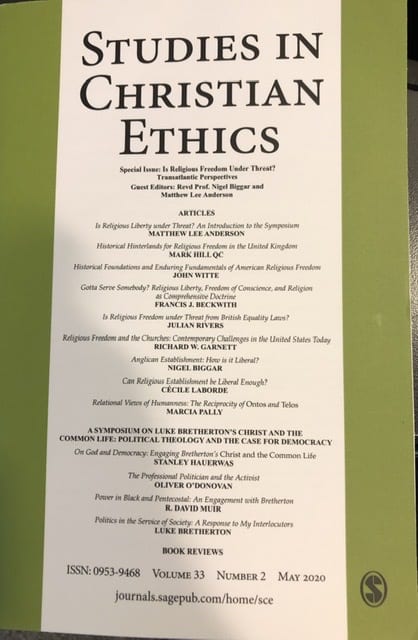 associated with several legal and political philosophers: Ronald Dworkin, John Rawls, and Christopher Eisgruber and Lawrence Sager. Calling it the Religion as Comprehensive Doctrine approach (RCD), the author contrasts it with an account often attributed to John Locke and the American Founders Thomas Jefferson and James Madison, the Two Sovereigns approach (TS). He argues that the latter provides an important corrective to RCD’s chief weakness: RCD eliminates (or greatly diminishes) from our vision those aspects of religious belief and practice that most conventional religious believers would consider essential to their faith.

What follows is the article’s opening paragraph:

In this article I am going to examine the ideas of religious liberty and freedom of conscience in light of a view I call Religion as Comprehensive Doctrine (RCD). It is a view often associated with thinkers such as Ronald Dworkin, John Rawls, and Christopher Eisgruber and Lawrence Sager. Each, in their own way, challenges the specialness of religion as a distinct category of legal protection, arguing that once we see what questions of human existence conventional religions are really trying to answer, we should conclude that religious liberty and freedom of conscience should protect not only beliefs and practices that we typically associate with conventional religions, but all beliefs and practices that arise from the foundational or ultimate concerns that give all our lives meaning and purpose. Although I am somewhat sympathetic to this account, I want to raise a concern about it, namely, that it may have the unintended consequence of teaching us the wrong lessons about conventional religious beliefs and practices, and ironically, make it more difficult for courts and legal scholars to grasp what those beliefs and practices really mean to conventional religious believers. I will argue that a more traditional understanding of religious liberty, which I call the Two Sovereigns (TS) approach, though not without its own difficulties, can provide a conceptual corrective to this problem.

You can read the rest of it here.  (It is behind a paywall. However, if you cannot access it, and you want a copy, email me).

August 28, 2020
The brilliance of St. Augustine on grace and free will
Next Post

September 15, 2020 On God, the Moral Law, and Losing Your Mind
Recent Comments
0 | Leave a Comment
Browse Our Archives
get the latest from
Return to Rome
Sign up for our newsletter
POPULAR AT PATHEOS Catholic
1