Millions of taxpayer dollars used to convert soldiers and their children to Christianity September 3, 2011 Justin Griffith

Chris Rodda wrote an extensive exposé on the amount of your taxpayer money being spent on converting soldiers and their children to Christianity.

Keep in mind that it is entirely outside of the scope of the Chaplaincy and the DoD’s other religious support to convert new people to a particular faith. They are certainly expected to tend to their ‘flock’, but not to grow it.

Is it evangelism? (yes)

Sometimes outsiders may not understand the smokescreen from terms like “Spiritual Fitness”. Some people might not recognize the evangelical creep from a cursory glance. Even a (very) small number of atheists have written to tell me that they had no problem with the questions on the Spiritual Fitness test.

They buy the claim that “Spiritual Fitness = Team Spirit” Or they claim to have no problem being “Spiritual Atheists” (focusing on the beauty of the universe, music, art, etc…) These justifications fail hard when faced with the reality of the situation we foxhole atheists face. These rationalizations are not consistent with the over-the-top “get right with god so you don’t kill yourself” message that was intended all along.

Here is a sample from the mandatory remedial Spiritual Fitness training after you fail the test. 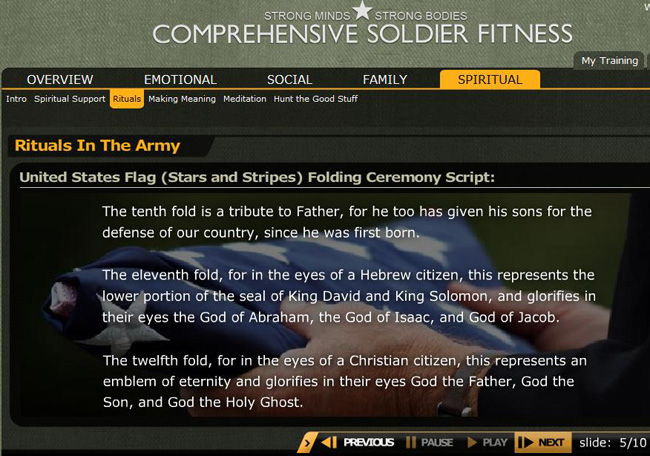 How about reading this chilling account of a Christian soldier who was forced to go to his Chaplain “to get born again” after his spiritual fitness failure on the same test.

My education, health, salary, and pension are shrinking… How about we lose all of this Spiritual Fitness stuff instead?

In a time when national debt is relatively common discussion, it seems that unconstitutional spending of hundreds of millions of dollars would be a natural choice for the chopping block. Instead, my educational opportunities (eArmyU), yearly salary increase for inflation (lowest in 50 years), retirement benefits (pensions for 20+ year veterans are now considered ‘on the table’ to be cut), are already in place or soon to be.

Insanity. How is this not shocking people? Being at the receiving end of a lot of this proselytism, I’m telling you that the system is broken. We need help. We need you to care.

Chris Rodda is a long time supporter of Rock Beyond Belief. She is the author of the eyeopening Liars For Jesus (a book she has now given away for free). She now works at the Military Religious Freedom Foundation as head of research. MRFF are co-clients with me in pending litigation against the mandatory Spiritual Fitness testing and training.

August 31, 2011
Calling all foxhole atheists - fill out THIS version of the Spiritual Fitness test.
Next Post

September 8, 2011 Keep evangelism and politics out of my military funeral, sign this.
Recent Comments
63 Comments | Leave a Comment
Browse Our Archives
get the latest from
Nonreligious
Sign up for our newsletter
POPULAR AT PATHEOS Nonreligious
1