I already typed this into YouTube’s description, so forgive the 3rd person narrative.

The Chaplain respectfully leaves off “so help me god” for the deployed atheist soldier’s re-enlistment ceremony.

Sergeant Griffith is the Military Director for American Atheists, and is also spear-heading the groundbreaking atheist-themed festival ‘Rock Beyond Belief’ featuring Richard Dawkins at Fort Bragg, NC in 2012. He even coined the phrase “There are no chaplains in foxholes.”

Despite all of this, these two are staunch allies – friends, even – and serve proudly as such.

This is an unheard of situation for many reasons. Not the least of which is the fact that a chaplain of such high rank is enthusiastically building this bridge. There are only a few chaplains with higher rank in the entire military.

This moment is potentially historic. The military’s long-standing climate of hostility towards atheists is beginning to change. Foxhole atheists like Griffith are slamming the ‘atheist closet’ door shut behind them.

There are plenty of evangelical Christians inside and outside of the chaplaincy that are vocally opposed to equal treatment for atheists. But this video demonstrates the silent majority of Chaplains who really do ‘get it’.

1) A religion can’t be favored over another…

2) religion can’t be favored over non-religion.

So even though these atheists aren’t a religion, they still deserve equal treatment, opportunities, and access to resources.

Currently atheist groups are officially banned from meeting anywhere on post until the DoD-level Chaplaincy approves their groups (as of Nov of 2011, it’s been an 11 month waiting game already, and with much hostility and interference.)

The atheists just want to meet in buildings (off-duty) and put their schedule out with the same visibility afforded to the religious groups. However, they are banned from even meeting in some gazebo until their packet is approved. They have met all obligations for such approval and are simply waiting. And waiting…

But this video is living proof that the atheist community *can* work in harmony with the chaplaincy – fulfilling the atheist’s meager ‘needs’ with ease. Perhaps this type of progress will be mirrored across the Department of Defense.

Military atheists wont burn down the chapel after their meetings, or go out to find neighborhood babies to eat. They simply want to identify and ‘fellowship’ with their community. Like Christian / Buddhist / Muslim / Jewish / Mormon / Wiccan soldiers already get, the atheists just want the same level of respect.

[pro-tip: this does not mean ‘atheism will be a religion’ or any such nonsense. Atheism IS non-religion, and nothing can change that. It is, however, a ‘religious preference’ (an Army term) and the Chaplaincy *must* support all religious preferences.]

This was an important moment in my life for so many reasons. It meant a lot to me to have such a powerful ally standing up there. 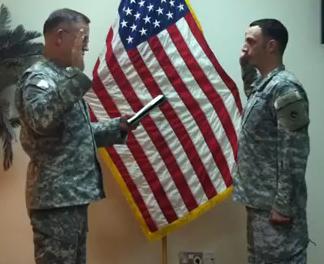 I really love to write about positive developments in our struggle for acceptance, and this is one of the strongest examples in my book.

It’s hard to tell if I’m too close to the situation, but this felt big. But I had the same reaction watching this as I did a few weeks ago for Megan Hurwitt’s ceremony. I actually got goosebumps watching her begin her military career with an ‘out and proud’ bang like that. Check it out.

November 4, 2011 TX Judge's child abuse video brings out fans of child abuse
Recent Comments
39 Comments | Leave a Comment
Browse Our Archives
get the latest from
Nonreligious
Sign up for our newsletter
POPULAR AT PATHEOS Nonreligious
1