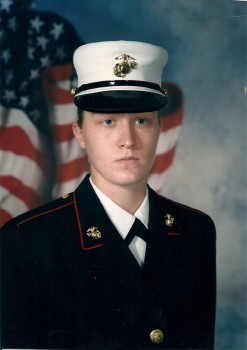 Esther Garatie is a hero to our nation, serving in the Marine Corps in war-time. She also happens to be a lesbian.

But that shouldn’t matter. Not when she checks into a Dallas-area VA hospital for treatment for severe depression – including suicidal thoughts. She wanted help, and was brave enough to actually ask for it.

She had been battling PTSD-like symptoms before she even received her Honorable Discharge. Rather than help, an evangelical Christian nurse took it upon herself to preach about Esther’s life of sin. Esther left the VA Hospital absolutely determined to kill herself because of this.

Luckily, Esther is still with us. This is one of the most depressing things I’ve seen in a while. You can read Esther Garatie’s heart-wrenching full statement at the Dallas Voice. But here are some extremely prescient selections:

I included information about my medical discharge injuries, while serving active duty, and that I was suffering from severe depression and possibly PTSD.    I heard my name called, “Esther.”  I got up and walked toward the voice of the woman, who barely looked at me, and called me “Sir.”  I followed her into her office and before I sat down, politely said, “Actually, it’s Ma’am….  My name is Esther.”  She sat down and looked at me, and her first question to me was, “Are you a Lesbian?”  I honestly stopped for a moment in shock, not knowing what to say.  Nowhere on the form, I had just filled out, did it ask me anything about my sexual orientation.  I was so confused!  I answered honestly, “Yes, I am gay.”

I could see why this question might be entirely relevant to psychological treatment. Perhaps the asking Nurse was a lesbian veteran, hoping to show ‘there’s hope’ by example – a “keep your chin up” of sorts. Perhaps they’ve run into a lot of veterans who have been dealing with an entire career’s worth of stress associated with maintaining a lie (‘she’ becomes ‘he’, military balls, sneaking around, hiding… what if you mess up just once?)

But as a first question? Red flag.

But check out where the conversation immediately went from there.

Quite an opportunist, this Evangelist seeks vulnerability

At this point I wasn’t really sure what to think.  She then began to ask me about my depression and anxiety, and I became very emotional. This was why I was there, because my depression had gotten so bad that I had had horrible thoughts of suicide previously, and knew that I needed professional psychological help.  Her second question to me was, “Have you asked God into your heart?  Have you been saved by Jesus Christ?”  This is when I realized that I was no longer a United States veteran in her eyes, I was just a homosexual.

Amazing. Shocking. Nurse should be fired right there and her medical certifications should all be revoked. No question about it.

But what answer was the nurse expecting?

The fact is, I was raised in a Non-Denominational church for most of my life, and consider myself to have a very personal relationship with God.  I was saved, baptized, twice actually. The first time I was a child and it was my parent’s decision, so I asked to be baptized again when I became a teenager and was able to make that decision for myself, and ask Jesus, again, into my heart.

Esther Garatie already is a Christian. And the type of Christian known as a ‘born-again’, just like the nurse.

I’m from Dallas. I was a born-again, attending various non-denominational churches. So part of me really feels almost guilty about this. I was genuinely concerned that all of my friends were going to hell, and I must have converted dozens of them, “Saving” or “Witnessing” them.

Perhaps Esther experienced discrimination growing up, but it seems extremely odd that it wasn’t mentioned. I’m only saying this because I certainly believed that homosexuality was a sin, as did every other True Christian that I associated with. It would seem impossible for Esther to have been an ‘out’ lesbian in this religious demographic.

I even remember a mentor of mine, Terry Cox, was fired from his job for saying something along the lines of “gay = sin” to a gay man he worked with. I remember all of us saying “That’s bullcrap!” And then getting into discussions about having to fund their sinful disease (AIDS). We then also blamed the blasphemous left-wing nuts for allowing this or that item on the ‘gay agenda’ to make it into law. I was 12 years old, and nothing being discussed would have lifted an eyebrow as to whether or not such talk was appropriate.

But now that I’ve left religion far behind, I still feel guilty about all of those I converted. How many did they convert? How many of them ran into someone like Esther Garatie needing real help? How many of them will have gay children?

I know it’s illogical to think such things, but I do. I choose to harness that shame and guilt into a driving force. But these stories rip me up inside.

Esther Garatie is a hero, and she did not deserve this. Her religion had nothing to do with her depression, suicidal thoughts, or PTSD symptoms. All she wanted was professional psychological treatment. She never asked the VA for religious treatment, which they do offer.

Quite possibly the most offensive instance of Lying for Jesus I’ve ever detected.

She continually pointed at her office door, the one all I wanted to do was run out of, and she said, “When you walk out this door, you need to pray and ask God for whatever his purpose is for your life, for him to show you, and bring you to his light.”  Ironically, this is something close to what I have prayed for every single day, since I left the military service, and had just prayed for that morning.   I had been praying for whatever God’s will was for my life, for him to show me the way and use my life to best service Him and His message.  This is the moment when she told me that “…maybe God’s plan for your life is to choose to return to the light, and then you could ‘help’ your friends, who are still in darkness and going to Hell, back to the light.  When I started practicing medicine there was actually a diagnosis for homosexuality, but they’ve gotten rid of that now, since Obama.”

Aside from being extremely offensive, the nurse’s statement doesn’t even make sense. Unless she is both very old and very young at the same time. Homosexuality has not been ‘treated’ by psychologists in several decades. The repeal of DADT is months old… What a bizarre thing to lie about in order to take a pot-shot at the Commander In Chief.

She needs to be FIRED. Sign the petition that Esther’s friend started. Every signature sends an email to this Nurse’s bosses (and their bosses) calling for the Firing of Nurse Pandithurai.

For unknown reasons facebook is now detecting this post as ‘offensive content’ because people reported it as such. For now, I’m advising those trying to spread the word to do this:

Edit: just learned that it’s now affecting all of my posts, not just this one. FFS trolls.

Nurse Nanci Pandithurai, the nurse responsible for this insanity has just been suspended from seeing patients.

The Dallas VA Hospital is keeping her on secretarial duties only until the investigation is complete. Why this took so long is not known. As a result of this post you are reading right now, over 6000 emails were generated demanding action taken.

How much blood is already on this woman’s hands?

November 6, 2011 Internet forces Anti-gay evangelist Nurse out of the privacy closet
Recent Comments
126 Comments | Leave a Comment
Browse Our Archives
get the latest from
Nonreligious
Sign up for our newsletter
POPULAR AT PATHEOS Nonreligious
1