Why 72 virgins is more like a punishment, not a reward.

Why 72 virgins is more like a punishment, not a reward. November 27, 2011 Justin Griffith

Radicals have used this promise to brainwash young men. If you think this one through, it’s not that awesome of a deal.

Let’s just say that the controversial 72 virgins reward wasn’t mistranslated, misinterpreted or otherwise misunderstood. Let’s also overlook the implications that a young woman’s virginity should simply be rewarded to others.

What about females? What reward do they get? Yeah, overlook that one too.

To the sex-driven young male contemplating Jihad, at first, it seems pretty awesome. It looks like this. 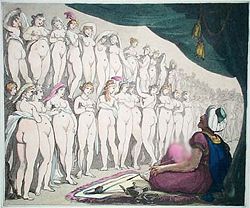 It’s inescapable that the sheer number of virgins means a few things:

Otherwise, it’s pointless to have so many specifically virgin women.

But here’s the logical problem: eternity is a long time.

You would ‘run out of virgins’ in just 72 days. That’s probably a conservative estimate for a teenage male.

So what’s next after the first couple months of virgins? Infinity years of no sex with virgins.

And 72 girls that are probably sick of you too. Imagine infinity years of that conversation.

Remember, a reward for Jihad is lots of sex with virgins. 2 months is just not ‘lots’ when compared to forever. So the moral of the story is: don’t do Jihad. I think.