Travis Air Force base is already under intense scrutiny over these displays that are inappropriate to begin with. 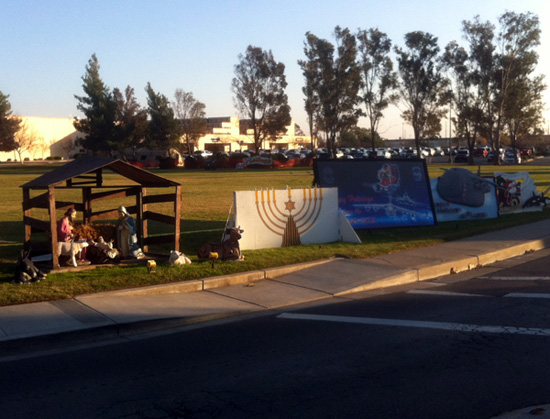 The official word so far was that each of the 20 or so displays represented a squadron on base. Apparently this facade implies that an entire squadron is Jewish. And wouldn’t you know it – their display just happened to be next to an entire squadron of Nativity Scene enthusiasts.

(Forgive the transition into third-person, but the following is from an upcoming press release from American Atheists.)

Staff Sergeant Dan Rawlings is a hero, and this is why

Travis Air Force Base is displaying inappropriate religious decorations, including a Nativity scene. The displays are not even near a chapel, though that would still be unlawful. These decorations were recently expanded to include a Jewish display, clearly an effort to claim ‘all sides would be represented’.

Staff Sergeant Dan Rawlings is an atheist stationed at Travis. Rawlings contacted American Atheists about putting up an Atheist-themed display as well. The display was intended to go up next to the Nativity Scene and the token Jewish Menorah. Justin Griffith, the Military Director at American Atheists offered to provide and pay for an equivalent display for Staff Sergeant Rawlings to submit. 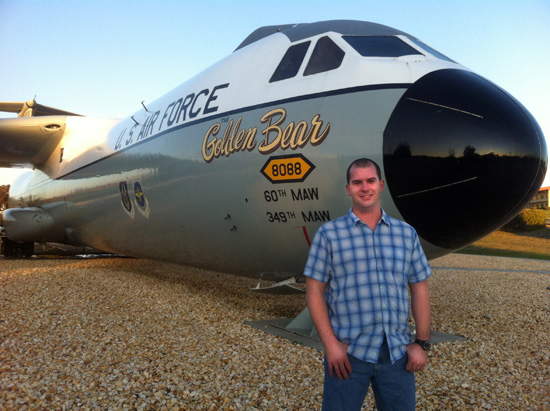 Staff Sergeant Rawlings expressed interest in peacefully participating in the controversial holiday display. Rawlings’ intent was to provide the local atheist community with a voice, letting them know there were others out there. He said he was excited when American Atheists stepped in and offered to make it all happen.

The proposed sign would have stated “Have a safe holiday season! – Travis AFB atheist community“. Minor variations had been tossed around, including ‘Stay Safe for the Holidays’, but the message was about as harmless as it gets.

Unfortunately, the illusion of a pluralistic environment was shattered when Rawlings was told by his USAF chaplain that he could not participate. His chaplain claimed to be following the orders of his higher headquarters; the Air Mobility Command commanders and their guidance.

The reason given was that “an investigation was being launched, so Air Mobility Command has requested that the entire display be left as-is.” This is reminiscent of efforts to preserve a crime scene. Except that in this case, preserving the display as it stands is the crime.

Staff Sergeant Rawlings then requested that the chaplain explain the denial in writing, so that Rawlings could forward it to American Atheists. The chaplain refused to document the incident at all, clearly aware that he was in the wrong.

It is painfully obvious that non-theists are being discriminated against at various levels of the command structure. The situation regarding USAF Staff Sergeant Dan Rawlings proves the fact that the Air Force commanders at Travis are not simply allowing ‘all groups to have their space’.

American Atheists, Inc has not heard back from officials at Travis Air Force Base. There is very little time left for commanders to correct the situation in a meaningful way. The secular organization is now joining with their peers in a vocal demand to remove the entire display altogether.

Encompassing the entire spectrum of religiosity, The California Council of Churches IMPACT, and the Military Religious Freedom Foundation, and now American Atheists are standing up for bedrock United States Constitutional principles. American Atheists Military Department sees nothing strange about these bed fellows.

A world class legal team is now in contact with Rawlings. Griffith said, “We can do this the easy way. Or, we can do this the hard way. But we absolutely will ensure that the U.S. Constitution is not subverted at the expense of its very defenders.”

December 16, 2011 Christopher HItchens 1949 - 2011
Recent Comments
41 Comments | Leave a Comment
Browse Our Archives
get the latest from
Nonreligious
Sign up for our newsletter
POPULAR AT PATHEOS Nonreligious
1