This sign was finally put up by the atheists at Travis Air Force Base, donated by American Atheists. Click to embiggen

Staff Sergeant Dan Rawlings is brave enough to do this without anonymity. The fight has not been easy. This ‘win’ is still bittersweet, as the atheists responsible are still banned from meeting on post. Say for instance, near this sign.

They even had to fight for a light similar to the Nativity Scene, for nocturnal illumination. 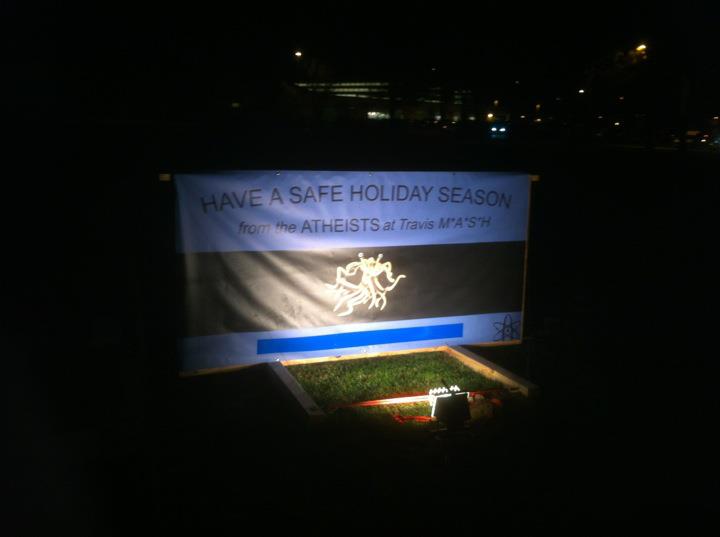 Dan Rawlings just let me know that he has already had to set up anti-vandalism watch efforts.

I went and reinforced our sign yesterday after the chaplain expresses his concern about it’s potential vandalism… I noticed driving to work today, that someone had moved my light, so that it lit up the card next to us instead. Can everybody help me keep an eye on it, and if the light gets moved again, just take a minute and reset it?

All it says is “Have a safe holiday season.” The fight against it is absurd.

The whole experience reinforces the American Atheists position that the Nativity Scene needs to be removed altogether. The chaplaincy’s repeated history of non-support for the atheists is illegal and institutional. They got caught with their pants down, and when the media and legal threats came in, they finally caved – and only on the one issue of this little sign.

If they were truly interested in ‘supporting all groups’ they would let Dan Rawlings and the other scores of Air Force atheists meet on post, and provide them the same level of support that they deserve.

Perhaps this baby-step will kickstart a chain reaction over at Travis Air Force Base. It is possible that this incident changed the game, and we hope that they continue to do the right thing even when the media attention fades.

If not, next year’s sign will be much more barbed than “Have a safe holiday season!”

**EDIT update: interestingly, a very large Christian organization is also asking for the Nativity Scene to be removed**

**Edit IMPORTANT UPDATE: The same shit is happening at Fort Campbell, Kentucky! We REALLY need visibility there now, as the chaplaincy seems to be playing hardball.**

The Two Factions Forming in the...
Roll to Disbelieve
Related posts from Rock Beyond Belief