Mikey Weinstein, President of the Military Religious Freedom Foundation, shared something with me today.

He shared a report in USA Today that  speaks about the statistical trend away from traditional religious identities. MRFF is an important – albeit religiously neutral – ally to the secular community and fierce defender of the US Constitution. But Mikey saw something that he knew I’d appreciate:

Paul Morris, an Army medic at Fort Bragg in North Carolina and veteran of six tours in the Middle East, says he has seen Christianity, Judaism and Islam in action, for better and for worse, and, frankly, he’ll pass.

Morris grew up “old-style Italian Catholic,” but says he never felt like his spiritual questions were answered. So, he says, “I just wiped the slate clean. I studied every major religion on the face of the planet. Every one had parts that made sense, but there was no one specific dogma or tenet I could really follow,” Morris says.

“So now, I call myself an agnostic — one who just doesn’t know. What I believe is that if you can just do the right thing, it works everywhere.”

I don’t know Paul Morris, but I wish I did. He’d fit in well with the rest of the non-believers in the Fort Bragg MASH group. Obviously there are plenty of interesting semantic conversations that go with ‘agnostic’ and/or ‘atheist’ labels. These conversations usually require an agreed upon definition of terms, but many of us refuse to ‘just check one box’.

We touched on that recently when an agnostic who – unlike Morris – is poorly spoken, came here and trashed the atheists at Travis Air Force Base. Well, he attempted to trash them, anyway.

The article in USA Today is a few months old, but the statistics are still very interesting: 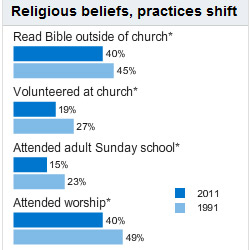 More highlights below the fold.

That’s one of the key findings in newly released research that reveals America’s drift from clearly defined religious denominations to faiths cut to fit personal preferences.

The folks who make up God as they go are side-by-side with self-proclaimed believers who claim the Christian label but shed their ties to traditional beliefs and practices. Religion statistics expert George Barna says, with a wry hint of exaggeration, America is headed for “310 million people with 310 million religions.”

**Edit: shortly after posting – I received a salient reply from Army Staff Sergeant Justin Miller – who like myself, does not speak on behalf of the, Army or the Dept. of Defense.**

Justin Miller: Seeing those religions in practice is also a large part of why I gave up Christianity. I was into it for awhile. I even spent vacation time in monasteries, fasted for 40 days twice a year, etc.

While I do appreciate the depth and esoteric element that monasticism-whether Christian, Muslim, Jewish, whatever-brings to big ideas, the reality of all three of those religions in the Middle East made me really consider how ridiculous all three were.

If you want a microcosm of religion at play in Iraq, get an Assyrian, Chaldean, Sunni and Shia’a translator in your office, and watch them all conspire to fuck each other over.

December 26, 2011 Pat Robertson Versus Doctor Who: "How time works"
Recent Comments
4 Comments | Leave a Comment
Browse Our Archives
get the latest from
Nonreligious
Sign up for our newsletter
POPULAR AT PATHEOS Nonreligious
1