In Cherryville North Carolina, somehow this is legal. Watch how many of them hurt themselves.

“Supposedly all the guns firing scared off the witches, out of the trees, and got rid of the bad things and brought in the good for the next year,” said Judy Houser.

Look at how unbelievably unsafe this is. Where the hell are the police? These people do not know how to fire their guns, and you see several of them get injured. Look how they hold their weapons!

This went on for 18 hours, starting on midnight (technically this was January 2nd. The last shot is supposed to be fired in about at 6:30PM.)

I’m sure you’re thinking to yourself, TL;DR for the rest of this post. But it’s totally worth it.

But as you start to dig deeper into this concept it just gets worse. A lot worse.

Via the Cherryville Shooters themselves:

The history of the Cherryville New Years Shooters basically can go back thousands of years. The “Chant” and producing loud noise is a ritual that has been in existence since the 1300’s.

The tradition centers around the “Chant”. The origin of the “Chant” is unknown but the version that is cried today is of  Old English grammar. There is a possibility that it has been translated from other languages over the years.

Their Ridiculous ‘ancient chant’ is not ancient or a chant.

The group’s website tells a tale of an Old English chant being handed down from ‘who knows what languages’. Perhaps, thousands of years.

But look at it:

Good morning to you, sir. We wish you a happy New Year,

So long as you stay here below. May he bestow the house you’re in,

Where you go out and you go in. Time by moments steals away,

First the hour and then the day. Small the lost days may appear,

But they soon mount up to a year. Thus another year is gone,

And now it is no more of our own, but if it brings our promises good

As the year before the flood, but let none of us forget

It has left us much in debt, a favor from the Lord received

Since which our spirits hath been grieved. Marked by the unerring hand,

Thus in His book our record stands. Who can tell the vast amounts

Placed to each our accounts? But while you owe the debt is large,

You may plead a full discharge. But poor and selfish sinners say,

What can you to justice pay? Trembling last for life is past

And into prison you may be cast. Happy is the believing soul,

Christ for you has paid the whole. We have this New Year’s morning

Called you by your name, and disturbed you from your rest,

But we hope no harm by the same. As we ask, come tell us your desire,

And if it be your desire, our guns and pistols they shall fire.

Since we hear of no defiance, you shall hear the art of science.

When we pull trigger and powder burns, you shall hear the roaring of our guns;

Oh, daughters of righteousness, we will rise and warm our eyes

And bless our hearts, for the old year’s gone and the New Year’s come

And for good luck, we’ll fire our guns!

This is clearly not Old English. Old English is nearly indecipherable by today’s standards. Middle English takes a lot of getting used to. But what we see here is thoroughly modern English, with a few grammar quirks. Also, I don’t see anything in there about chasing demons, witches, or anything of the sort. It’s all about converting people to Christianity, and well… shooting guns.

Etymology reveals that the word ‘science’ in the modern sense of “non-arts studies” is attested from 1670s. The pistol originates in the 16th century, with the word ‘pistol’ entering English lexicon around 1570.

The history of Old English can be subdivided in:

So it’s a mystery to me as to why so much age is bestowed on this chant. This chant is only being ‘cried’ by one last township from some supposed tradition that was widespread.

Guess what I found! The pre-plagiarized version of the chant.

First of all, it’s not a chant. It is a hymn. It was written by British Anglican priest John Newton who lived from 1725-1807. Newton was a slave trader, attempted military deserter, a slave dealer, and even a slave himself after being kidnapped by Africans. He wrote ‘Amazing Grace’, and was very successful in England.

He stopped participating in the slave trade in 1788, decades after becoming a priest and writing his famous hymns. He claims his Christian faith forced him to stop. He claims he wasn’t a ‘full Christian’ until this time, despite decades of fame to the contrary.

So this famous Hymn is written by a Red Coat, a military deserter, and slave dealer who wasn’t even that Christian (whatever that means) until later on. It should be noted that the last few verses were not included in the ‘ancient’ chant – including a line about god moving his bowels.

Furthermore, it turns out that the last bit – the bit about guns – wasn’t in the original. I highlighted the added portions in blue text. This seems to come from around 1800-1850’s.

Remember when you were in grade school and instead of writing your own poem, you just wrote the lyrics to some song? Perhaps you changed a few words here and there, but you know the drill… This ‘ancient’ chant is like that.  This is mostly black powder, but skeeter is still operating under ‘Christian privilege’. Nobody else gets an entire day for their religion, and the police are complicit. The medics’ time and expenses are real, whether the threat is deadly or not. 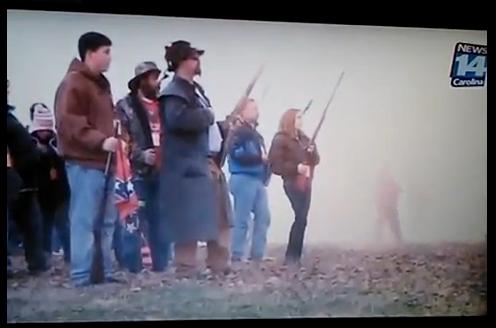 **Edit: they made a music video that  freaks out my cats.**

January 4, 2012 Dat Santorum
Recent Comments
39 Comments | Leave a Comment
Browse Our Archives
get the latest from
Nonreligious
Sign up for our newsletter
POPULAR AT PATHEOS Nonreligious
1