A while back I posted about a heart wrenching and debate-ending example of why foxhole atheists need to demand NO-REL-PREF be accurately updated on their records to ATHEIST. Many are being told that it’s not possible – and on the contrary it has been for decades.

Captain Ryan Jean wrote to me:

It took me two minutes and an open-minded Admin NCO to change my religious affiliation from “NO-REL-PREF” to “ATHEIST” back in 2009.

It took me a week of waiting and ten bucks of my own money to give my dog tags a similar treatment. 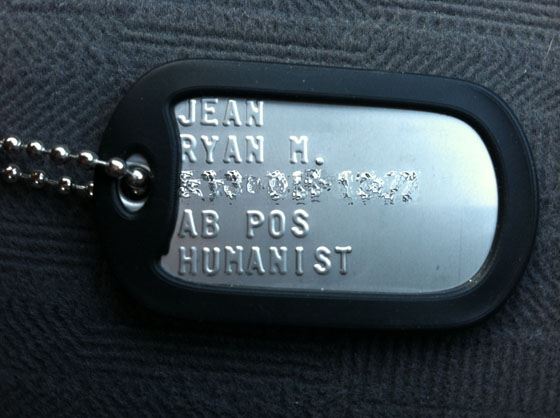 Everyone: please go get your records fixed!

Army Captain Ryan Jean is one of the small handful of people demanding equality from the Chaplaincy, in the form of ‘lay leader’ status.

I came up with this concept in January 2011, and gained national visibility (also here) shortly thereafter. My own attempt was thwarted in an extremely ugly way, that I’ve not yet shared with the public. I don’t want to discourage any of my fellow foxhole atheists, perhaps they wont have my ‘luck’.

CPT Jean still has a real shot. He started getting national media attention a few months ago. Reporters are still scratching their heads, and I get it. But there are a lot of misconceptions about why we want to work with the chaplaincy. None of us wants to work against the chaplaincy. But without their ‘blessing’ if you will, we can’t even meet on post in a meaningful way.

I’ll share the extremely sad ending to my saga one of these days. But not until heroes like Captain Ryan Jean get their fair chance.

January 6, 2012 Horseshoe pro: "but if either you or your horse are an idiot..."
Recent Comments
4 Comments | Leave a Comment
Browse Our Archives
get the latest from
Nonreligious
Sign up for our newsletter
POPULAR AT PATHEOS Nonreligious
1