Afghan War veteran – Steven Hewett – demanded that the city remove the Christian Flag that was raised over the public memorial to veterans like him. They called him a coward, and threatened to beat him up (and the handful of other supporters). They demanded that people like Steven be run out of town so that any pending lawsuit would lose its legal standing.

Clearly, they are fueled by the history revisionism of Liars for Jesus like author David Barton. (‘Merica is a Christian nation. Thomas Jefferson ordered the Marine Corps band to play at the Sunday church service in the Capitol Bldg… etc.) Weird little half-truths so brutally distorted that they only convince those who actively want it to be true.

A Senator and a NC Representative joined a rally against Hewett’s efforts, on stage. It was pretty damned offensive:

Please watch the entire film In God We Trust (above – free on YouTube), and ‘like’ the Remove the Christian Flag from King Facebook page created by Steven Hewett. Let this brave hero know that you give a shit!

When I was given a DVD of a protest rally in the small town of King, near where I live, I was shocked by the sight of five thousand people waving Christian Flags and cheering one of the speakers when he said that everyone there should “encourage” those who weren’t Christian in the area to move somewhere else.

My first reaction was anger and I told my wife, Susan, we were going to put our house up for sale the next day and move somewhere more tolerant. But the next morning, I decided that I would do something else first. I took my video camera down to the Veteran’s Memorial in King’s Public Park and started interviewing people. 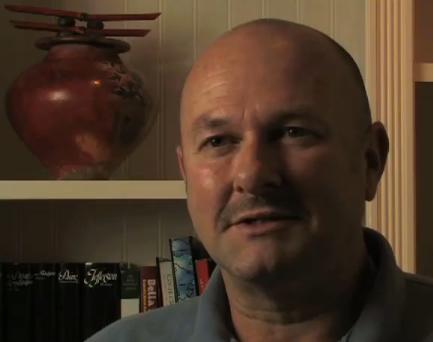 I learned that the rally had been ignited by a returning Afghanistan Veteran who threatened to sue the town if they didn’t remove the Christian Flag from the public Veteran’s Memorial.

I was surprised that most residents believed that Separation of Church and State is a myth and that the Founders intended this to be an officially Christian Nation. They quoted so many historical facts from a man named David Barton to back up their claims, that I really wondered if what I’d taken for granted might be incorrect.

And thus began a year-and-a-half journey in my spare time to find out the truth and source of the idea of Separation of Church and State, as well as interviews with half a dozen different religious groups in the area about what and why they believed what they do. The story quickly became as much about what we believe about God as what we believe about the Founders of the United States — and how we evaluate truth itself.

Although I started the project out of anger, I ended up truly liking the people I interviewed on all sides of the issue and it helped to diffuse my own negative emotions to the point where I felt a responsibility to honestly represent the viewpoints of even those I disagreed with the most. To that end, I have not done any narration, but have simply let the people themselves give their opinions in their own words. I will leave it up to you to decide who you agree with.

This was just me with a camera on my own, so it is definitely not a professionally produced documentary, but I hope some will find it as interesting a subject and as much an education as I did in making it.

January 24, 2012 Pat Robertson's sheet music sets him up for failure
Recent Comments
31 Comments | Leave a Comment
Browse Our Archives
get the latest from
Nonreligious
Sign up for our newsletter
POPULAR AT PATHEOS Nonreligious
1

'No gratuitous violence in the Bible,'...
The Freethinker
Related posts from Rock Beyond Belief