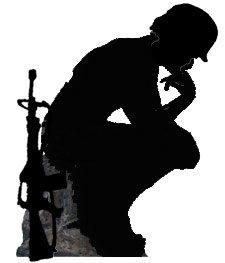 All the while, the Chaplaincy’s regulations were preventing us from meeting on post. We’ve had to meet in people’s homes, often an hours drive for some members. And we are unable to collect donations the way the other religious preferences are allowed. I spent thousands in the first six months to keep it going until we got approved… but the chaplaincy just wont budge.

Those regulations don’t apply to getting ready for the already approved atheist festival, Rock Beyond Belief. That’s because RBB did not go through the Chaplaincy, so it couldn’t be blocked there. Actually, they wouldn’t touch it – I did try.

MASH Fort Bragg gets born again (but not like that)

Fort Bragg’s MASH is making a comeback – It’s tough to maintain a community with the transient nature of the military. After I deployed, it sort of lingered under the control of people with dual allegiance to another smaller group. They tended to only post their meetups to our page, and after four or five months, it started to choke off the excitement we had going. People just joined their group and stopped thinking about ours. We welcomed the cross-posting at first, but it’s time to turn ‘life support’ off and get back to LIFE!

The other group is not focused on the military community, which is fine, but what we are doing is really important. And there is room for both. We’re still by far the largest group in the area, but we desperately need to re-boot the excitement from 2011. Be it deployments, or moves, this stuff takes its toll. We had a contingency plan, but all six of the core leaders moved or deployed at the exact same time.

But I’m back now. And we’re going to kick an amazing amount of ass (again). And I’m training my replacements so this situation never occurs again. Not that it ever died, but our new blood hasn’t seen how it’s done yet.

This weekend is historic; MASH Fort Bragg is going to meet on post for the first time. Though still banned by the chaplaincy, we’re not ‘meeting as MASH’. Rather, we’re planning for the upcoming Rock Beyond Belief festival. We refuse to break rules, but in this particular situation we are not bound by them.

We’re going to help Amy Monsky from Camp Quest get her volunteers, and get the lay of the land, along with other groups from the Raleigh area. So join MASH Fort Bragg if you want to be a part of history. More details about this meeting simply must be private for now, but this is a big one.

There will be punch and pie.

If you can donate a little bit of money please use the links below. A tiny bit of money will go a long way to us! As it is, I’ve spent thousands of dollars out of pocket because at first we didn’t understand how to make it sustainable. Please help us get back on our feet. We’re like too big to fail, or something 🙂

I’ve not sold T-shirts, stickers, or anything at a tacky Cafe-press site. I’ve not nickel and dimed the atheist community before. We’re not asking for a whole lot of money. Any tiny amount will seriously go far.

We’re slamming the closet door shut in the military – and you can help.

If you are on Fort Bragg, please show up this weekend! (civilians too)

February 7, 2012
Atheists at Travis Air Force Base have a meaningful community
Next Post